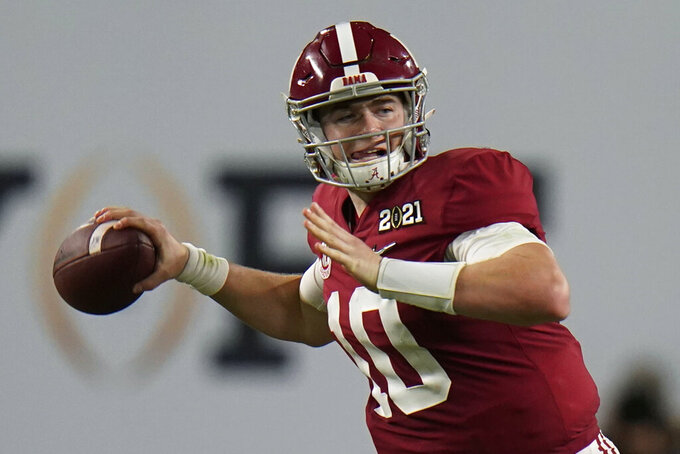 FILE - Alabama quarterback Mac Jones passes against Ohio State during the second half of an NCAA College Football Playoff national championship game in New Orleans, in this Monday, Jan. 11, 2021, file photo. Jones is a likely first round pick in the NFL Draft, April 29-May 1, 2021, in Cleveland.(AP Photo/Chris O'Meara, File)

As soon as the San Francisco 49ers traded three first round picks to move up to No. 3 overall, it became clear that quarterbacks would come off the board at a record pace at the NFL draft.

While QBs are widely expected to go 1-2-3 for just the third time in the common draft era that started in 1967, there are still questions about how many others will follow in the top 10 and first round.

Trevor Lawrence and Zach Wilson are expected to be the top two picks, to Jacksonville and the New York Jets, with the Niners likely choosing among Mac Jones, Trey Lance and Justin Fields at No. 3.

That would match 1971 (Jim Plunkett, Archie Manning, Dan Pastorini) and 1999 (Tim Couch, Donovan McNabb, Akili Smith) as the only drafts with quarterbacks taken with the top three picks.

A record could be set with four QBs going in the top four if Atlanta drafts the successor to Matt Ryan or trades down to a quarterback-needy team.

If Fields, Jones and Lance all get taken in the top 10, that would also be a first, beating the four top-10 QBs taken in the 2018 draft when Baker Mayfield, Sam Darnold, Josh Allen and Josh Rosen all went off the board quickly.

All five of those QBs are almost assuredly first-round picks, something that also happened in 1999 when the five came off in the top 12, and in 2018 when Lamar Jackson was picked 32nd to join the four top-10 QBs.

If somehow, Kyle Trask, Kellen Mond or Davis Mills go off the board late in the first round, the 2021 draft could match the 1983 class with six first-round QBs.

That class that featured Hall of Famers John Elway, Jim Kelly and Dan Marino, along with Todd Blackledge, Tony Eason and Ken O’Brien, is widely considered the best ever for quarterbacks.

With Lawrence set to be the 26th quarterback to be picked first overall since the merger, quarterbacks will account for exactly half of the top picks since 1970.

This will be the sixth time in the past seven years that a QB went first overall, with Cleveland defensive end Myles Garrett the only other player to break through in 2017.

It wasn’t always this way, with a stretch from 1994-97 when the top picks were defensive tackle Dan Wilkinson, running back Ki-Jana Carter, receiver Keyshawn Johnson and tackle Orlando Pace.

There was even an 11-year stretch from 1976-86 when Elway was the only QB to go first overall.

The most popular position besides quarterback to go first overall since the merger is defensive ends with 11, followed by running backs (six), offensive linemen (3), receivers (2), linebackers (2) and defensive tackles (two). There has never been a tight end or defensive back drafted first.

With most of the teams at the top of the draft appearing to be targeting quarterbacks and other offensive players, this could be the longest wait ever for a defensive player to come off the board.

The latest the first defensive player has gone in the common draft era beginning in 1967 was seventh overall in 1999, when Hall of Famer Champ Bailey was taken by Washington.

As recently as 2019, four of the first five players drafted came on the defensive side, with Nick Bosa, Quinnen Williams, Clelin Ferrell and Devin White following top pick Kyler Murray that year.

This could also mark the first time since 2012 that a defensive lineman didn’t get picked in the top 10. Dontari Poe was the first one off the board that year at No. 11 to Kansas City.

Florida tight end Kyle Pitts could make some draft history this week. If Atlanta picks Pitts at No. 4 overall, he will be highest drafted tight end in the common draft era.

The only time a tight end was picked in the top five came in 1972, when Denver took Riley Odoms fifth overall. Odoms was a two-time All-Pro and four-time Pro Bowler with 396 catches in 12 seasons.

Alabama is set to have a pair of receivers picked in the first round for the second straight year, with DeVonta Smith and Jaylen Waddle set to follow 2020 first-rounders Henry Ruggs III and Jerry Jeudy.

The only other colleges to have a pair of receivers picked in the first round in the common draft era are 2007 LSU (Dwayne Bowe and Craig Davis), 2007 Ohio State (Ted Ginn Jr. and Anthony Gonzalez), 2001 Miami (Santana Moss and Reggie Wayne) and 1997 Florida (Ike Hilliard and Reidel Anthony).