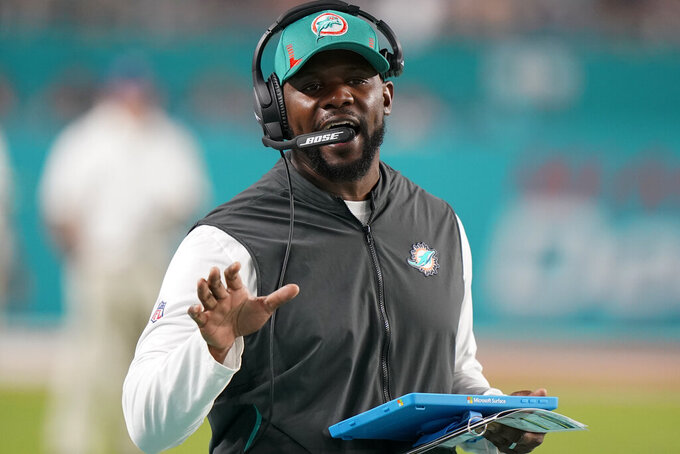 The NFL has taken several steps to improve diversity among leadership positions, yet Mike Tomlin is the only Black head coach after Brian Flores and David Culley were fired this week.

“We’ve been working on this every single day since the hiring cycle ended a year ago and we have to do better,” NFL executive Troy Vincent told The Associated Press. “We have high expectations that we should see positive results because the work has been put in.”

The work includes adjusting the anti-tampering policy, expanding the Rooney Rule, incorporating virtual interviews and providing owners a database with 5,177 candidates — of which 3,798 self-identified as minorities.

“Any criticism we get for lack of representation at the GM and head coach positions, we deserve,” NFL senior VP and chief diversity and inclusion officer Jonathan Beane told the AP. “We see that we’re not where we want to be. We have to do much better. We’re focusing on all roles at the league, and all these roles are key roles.

"But certainly at the top of the house, general manager and head coach, that’s the responsibility of the NFL to make sure that we are representing our current fan base and we’re representing those that are in the league today. And if you look at it right now, we’re grossly underrepresented.”

The NFL has three Black general managers, and three current openings. League officials are optimistic numbers will increase at both coach and GM positions based on the interview requests teams have made so far.

“We are following each club with their process, ensuring that it’s comprehensive, making sure that they’re really doing the hard-core research to identify all the great talent that’s out there, minority talent, overall talent and giving everybody a fair shot to compete for these roles," Beane said. "Also, looking a little bit out of the box and not always being traditional, there’s wonderful talent out there.”

He cited Jason Wright, who was hired by Washington as the NFL’s first Black team president in 2020, though owners haven’t made similar hires often enough.

The Fritz Pollard Alliance, which advocates for diverse hiring in the NFL, said in a statement Friday that firing of Flores and Culley is a “disappointment given efforts to increase the representation of Black coaches as head coaches in the NFL.

"The fact that we stand today with only one Black head coach makes clear that the current system does not provide a sustainable pathway for the growth in numbers of minorities as head coaches.”

Since the Rooney Rule was instituted in 2003, only 27 of 127 head-coaching vacancies (21%) have been filled by minorities in a league where 70% of the players are Black. The league had seven Black head coaches in 2017 but there’s been steady regression despite heightened awareness and the various enhancements.

“When people are tuned into our game, the head coach, the quarterback and the referee have the cameras on them,” Vincent said. “We have to have proper representation in each of those areas. The general public expects that and we expect that as well.”

Black coaches get inordinately fewer second and third chances than their white counterparts. Black coordinators get fewer opportunities to prove they can be head coaches. Consider Kansas City Chiefs offensive coordinator Eric Bieniemy, who still hasn’t been given a shot even though he has helped guide one of the league’s top offenses and one of its best quarterbacks, Patrick Mahomes.

Tampa Bay Buccaneers offensive coordinator Byron Leftwich has an impressive resume. He was a former first-round pick, won a Super Bowl as a backup quarterback, and has been an integral part of Tom Brady’s success the past two seasons.

He’s waiting for the same opportunity other assistant coaches who worked with Brady already received. Among those is Patriots offensive coordinator Josh McDaniels, who at age 32 got his first chance to be a head coach with the Broncos in 2009.

Buccaneers defensive coordinator Todd Bowles played in the NFL, was a head coach with the New York Jets and led a defense that shut down Mahomes and the Chiefs in the Super Bowl last year.

He’s waiting on a second chance to be the man — a Black man — in charge.

“They have shown it on the field, their leadership and their expertise,” Beane said of Bieniemy, Leftwich and Bowles. “So just going off of the facts, the performance has been exceptional.”