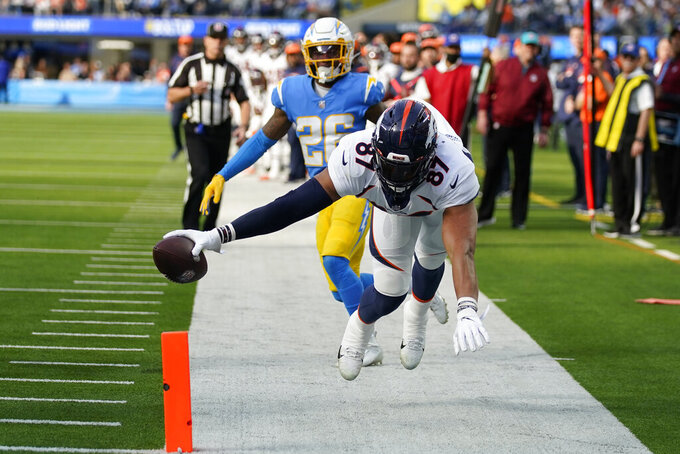 Denver Broncos tight end Noah Fant reaches for the pylon but fails to score during the first half of an NFL football game against the Los Angeles Chargers Sunday, Jan. 2, 2022, in Inglewood, Calif. (AP Photo/Jae C. Hong )

The NFL Foundation is awarding a variety of organizations in 30 locales with a total of $6 million to build or refurbish neighborhood football fields.

The awards are the most in a single year since the NFL Foundation/LISC Grassroots Field Grant Program began in 1998, and bring the program’s total commitment to $58 million, resulting in the creation or refurbishment of 416 fields nationwide.

All fields are newly built or significantly renovated, with improvements such as irrigation systems, lights, bleachers, scoreboards, goal posts and turf. Grassroots grants are issued once established funding thresholds are reached for each project.

“Over the last two years, we’ve seen that it’s more important than ever to make sure our youth and their families have access to safe and reliable spaces to play and stay active,” said Alexia Gallagher, vice president of philanthropy and executive director, NFL foundation. “Working with LISC on the Grassroots Field Grant program has positively impacted the lives of millions across the country, and we look forward to continuing such impact in even more communities.”

The Broncos went 7-10 last season, including 7-7 with Teddy Bridgewater under center and 0-3 with Drew Lock taking the snaps.

“I don’t really do too much recruiting from my perspective,” Fant said on the AP Pro Football Podcast. “I just kind of let the chips fall where they may. I’ve caught balls from like eight different quarterbacks now through my three years, so it’s going to be who it’s going to be. So I try to make the best out of every situation.

"I think our team is definitely in a win-now mode. We have a lot of building blocks, a lot of pieces to win now, and that’s the whole focus of the team. So whether that’ll be a current QB on the roster or whether it be a different QB coming in, that’s the big thing, and that’s the goal is to win now.”

First, Denver needs to hire a head coach to replace Vic Fangio. Fant doesn’t have a strong preference for an offense-minded coach even though he plays tight end.

“I always love an offensive-minded guy, but we’ve hired defensive-minded guys also that have done great,” Fant said. “I think the biggest thing is finding a guy that is a great leader of a team and whether it be offense or defense and going from there, a guy that can lead our team to where we want to go and lead progress.”

“I’ve been super interested in the NFT space,” Fant said. “I’m starting to learn more about it, and obviously it was kind of new and foreign to me once I initially got into the game. But I think it’s where the future’s going to have those NFTs out there, to own them, to be able to buy, sell, trade them. I’m excited to be a part of.”

Sunday’s NFC championship game between the San Francisco 49ers and Los Angeles Rams is a dream matchup for ticket resales. The game is trending toward being the top-selling playoff game in StubHub history, excluding the Super Bowl.

The starting price for a ticket at SoFi Stadium is $600, with the average price coming in at $1,187. There already figured to be a high demand for tickets after 49ers fans made up a sizable contingent for the Jan. 9 regular-season finale, which San Francisco won 27-24 in overtime to make the postseason.

“Hopefully we’ll have a sea of red down at SoFi and turn it into Levi’s South,” 49ers kicker Robbie Gould said.

The Rams drew the ire of some Niners fans when they were going to restrict public sales to those with Southern California zip codes. But Rams season-ticket holders bought up the remaining tickets during a presale.

Some season-ticket holders who bought extra seats are using it as an opportunity to help pay off their seats or make a profit.

“I think the trend we have seen with sports in general and new stadiums that come on the market is that with the personal seat licenses, these are great opportunities for fans to recoup some of their investment,” StubHub spokesman Adam Budelli said. “We have certainly seen a lot of season-ticket holders across the country look to capitalize on potential playoff runs to recoup some of their money.”

If there is anyone who knows the relief the Cincinnati Bengals organization and fans are feeling after ending a pair of postseason losing streaks, it is Marvin Lewis.

In advancing to the AFC championship game at Kansas City, Cincinnati ended a 31-year playoff drought in the wild-card round against Las Vegas, then got its first postseason road win last Saturday at Tennessee.

Lewis helped turn around a franchise that had experienced 12 straight losing seasons prior to his arrival in 2003. He led Cincinnati to seven postseason appearances during his 16 years in charge, and helped modernize the football operations. The one thing he couldn’t do, though, was get a playoff win. After a loss to Houston in a 2013 wild-card round game, Lewis said he empathized with soap opera actress Susan Lucci’s longtime pursuit of a daytime Emmy.

“I’m happy for (owner) Mike Brown. I’m happy for the players and coaches who were there when I was, and the city of Cincinnati. It’s great,” said Lewis, who is coaching the National squad at this weekend’s NFLPA Collegiate Bowl all-star game at the Rose Bowl. “Now they don’t have to think there was some kind of jinx. It’s how you go out and execute. And that’s what counts.”

Lewis recently completed his third season at Arizona State, where is a special assistant to the head coach Herman Edwards. He is still close with many of his former players. He attended the Los Angeles Rams' regular-season finale against the San Francisco 49ers as a guest of Andrew Whitworth’s family.

While the New York Giants are considered one of the NFL’s top organizations off the field, not everything is first class.

Take Joe Schoen’s second interview for the then-vacant general manager’s job last week. It was set up at the last minute and co-owner John Mara said the only seat the team could get Schoen for the flight from Buffalo to the New York City was the middle seat in the last row next to the lavatory.

Kids fight to avoid that seat.

It certainly was different for Schoen, who spent the past five years as Bills assistant general manager. The Bills are owned by Terry and Kim Pegula. They occasionally would let general manager Brandon Beane and Schoen use their private jet to scout college games. Luxury plus.

“John told me our private jet around here is called JetBlue,” Schoen quipped on Wednesday.

“You could put me wherever you want to put me,” Schoen said. “I’m going to interview for the New York Giants and I’ll ride on the wing if you need me to. So I didn’t care where they put me. That’s not me. I’ll sit wherever. ”