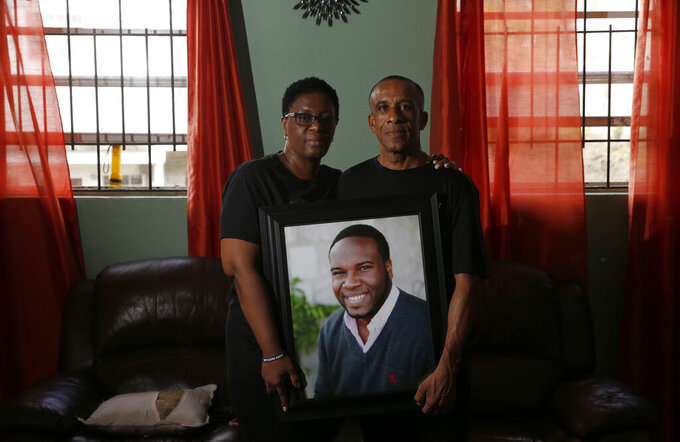 FILE - In this Sept. 25, 2018 file photo, Allison and Bertrum Jean pose as they hold a portrait of their late son Botham Shem Jean at their home in Castries, St. Lucia. A public service announcement honoring the life of Jean, who was killed in his living room by Amber Guyger, a white Dallas police officer who said she mistook his apartment as her own, will air during the Super Bowl next month to highlight the impact of police violence, the family's lawyer said. (Vernon Bryant/The Dallas Morning News via AP, File)

DALLAS (AP) — A public service announcement honoring the life of a black man killed in his living room by a white Dallas police officer who said she mistook his apartment as her own debuted as part of an NFL initiative aiming to promote social justice and racial equality.

Attorney Lee Merritt said Jean's family intentionally refers to the native of St. Lucia in the present tense, even though he died in September 2018.

“It’s important for them, for people to understand that although he was killed, his legacy lives on,” Merritt said. “He continues to influence the world. … The impact that he made on people in his 26 years continues to have ripple effects today.”

Merritt said the PSA will air during February's Super Bowl to highlight the impact of police violence. But an NFL representative told the Dallas Morning News on Thursday that there were no plans to air the video during the game.

The officer who shot Jean, Amber Guyger, was convicted of murder last year and is serving a 10-year prison sentence.

The public service announcement opens with an image of Jean smiling alongside his mother, Allison Jean.

“Botham Jean is my son,” she says. “He is an active child. He is the light in any dark room.”

His sister, Allisa Findley, calls her brother “the kindest, sweetest person you could ever know.”

Allison Jean says what happened to her son “should not happen to another family.”

“What I hope to see happening is that our black boys are not seen as a threat,” she says.

The NFL launched Inspire Change, in addition to the Responsibility Program, amid the fallout over its treatment of exiled quarterback Colin Kaepernick and current players who have demonstrated during the national anthem to protest brutality and injustice.