NFL keeping watch on return of HBCUs to national prominence 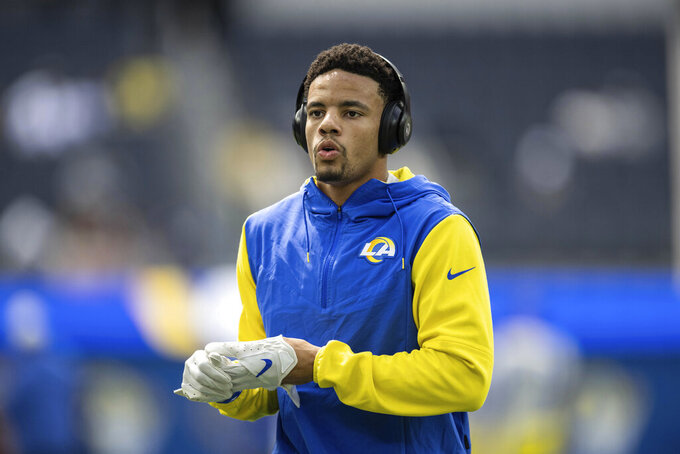 KANSAS CITY, Mo. (AP) — During their original heyday in the 1960s, when much of the nation was still coming to grips with the end of Jim Crow, the Kansas City Chiefs and their visionary coach, Hank Stram, realized more quickly than perhaps any team in the AFL or NFL that players from historically Black colleges and universities were good.

They were fast and strong and talented, just like the players produced by Bud Wilkinson at Oklahoma or Bear Bryant at Alabama. So the Chiefs drafted them, and Buck Buchanan and Willie Lanier and Otis Taylor went on to form the backbone of powerful teams that reached two Super Bowls and beat the Vikings for their first championship.

So it made poetic sense in April when the Chiefs, on the clock in the fourth round of the draft and trying to revamp their aging secondary, turned in a card with Joshua Williams' name on it. The cornerback from Fayetteville State was the first of four HBCU players chosen this year after none were selected in 2021 and just one went off the board in 2020.

“I’m very proud of where I came from,” said Williams, who went seven spots before the Los Angeles Rams picked South Carolina State defensive back Decobie Durant. “It just speaks to the exposure we’ve been getting and also to the hard work that I’ve been putting in. I’m glad it all paid off. I’m glad all of these things are coming to fruition.”

It might not be a one-year fluke, either. The talent level at HBCUs has improved recently, one of many byproducts of widespread societal changes. There is more exposure through television and streaming services. New bowls and showcase games are giving HBCU players an opportunity to earn coveted invitations to the scouting combine.

As a result, NFL teams are once more mining those small colleges for hidden gems. When training camps opened this fall, 33 players from HBCUs were on rosters for 17 teams.

“Having opportunities to go to bowl games, the (NFL) combine — now you’re getting kids motivated,” Prairie View A&M coach Bubba McDowell said. “They’re seeing kids prior to them leaving and going to the combine and all the all-star games, now you’re just increasing their ability (to say), ‘It can really happen in the SWAC.’”

There are 33 players from HBCUs in the Pro Football Hall of Fame, but many of the biggest stars played during the 1960s and ‘70s. That's when Eddie Robinson's Grambling State juggernaut produced future Packers star Willie Davis, Bears offensive tackle Ernie Ladd and Buchanan, whom the Chiefs picked first overall in the 1963 AFL draft. And when rivals such as Southern, Tennessee State and Texas Southern had players capable of playing anywhere.

The biggest reason many of them chose to play at HBCUs: It was one of their few options, and often the best.

Sure, some progressive colleges had been fielding Black athletes for years. But others were painfully slow to integrate — the Crimson Tide didn't have their first Black scholarship football player until Wilbur Jackson in 1969. And with racism still running rampant on many college campuses, talented recruits — particularly those in the Deep South — simply felt safer and more comfortable attending historically Black colleges and universities.

They were coming of age during the Civil Rights Movement, and it became a point of pride to play for such schools.

“I was determined," Buchanan said years later, “to prove that players from small schools could play in the big leagues.”

Indeed, during a five-year period in the late ‘60s, about 70 players from HBCUs were drafted each year, though that figure is somewhat inflated compared to today’s standard by the dueling AFL and NFL drafts and the fact that each had more rounds than today.

As major Division I colleges integrated, though, Black players inevitably signed on with traditional powers such as Alabama and Texas. There were still outliers, of course — Walter Payton was a Mississippi prep legend who received no SEC offers and wound up at Jackson State, playing alongside another future NFL star, Jackie Slater. But by the mid-1980s, HBCUs were producing fewer than 20 draft picks in an average year, a third of the total a decade earlier.

Every once in a while, generational talents would capture NFL attention, such as Jerry Rice (Mississippi Valley State) and Michael Strahan (Texas Southern). But for the most part, HBCUs became an afterthought for professional scouts.

Until recently, that is.

The Black Lives Matter movement coupled with a national reckoning in terms of social injustice, one largely led by young people, appears to have sparked renewed interest in HBCUs, just like the Civil Rights Movement a generation earlier.

And when it came to the gridiron, the decision by Hall of Fame cornerback Deion Sanders to coach Jackson State in the fall of 2020 gave the longtime SWAC powerhouse — and other HBCU programs — a certain “cool factor” among recruits. That was evident last December, when five-star prospect Travis Hunter switched his commitment from mighty Florida State to the Tigers; other talented Division I prospects have followed suit and signed with HBCUs.

That includes the MEAC, the other HBCU conference in the Football Championship Subdivision, but also smaller leagues such as the CIAA. That's the Division II conference where Fayetteville State plays, and where Williams — the Chiefs' draft pick this past April — did enough to warrant an invitation to the Senior Bowl.

It was there that Williams shined against players from powerhouses such as Texas A&M and Michigan, putting him on NFL radars and earning him a spot at the draft combine, where his workout sent him climbing up draft boards.

Including the one in Kansas City, where players from HBCUs flourished decades ago.

“We're just looking for football players, and it doesn't matter where you come from, what your story is,” Chiefs general manager Brett Veach said. “If you can help us win games, and be a positive influence in the community, you know, we're going to find a way to make you a part of this roster. Josh was the same. He falls into that category.”

Williams and Durant were joined by fellow draft picks James Houston, the Jackson State linebacker who went in the sixth round to Detroit, and Southern offensive lineman Ja’Tyre Carter, who went in the seventh to Chicago.

“If I see the burst and the acceleration, I see the change in direction, that translates if you’re at Alabama or if you’re at Fayetteville State,” explained David Hinson, the Chiefs' co-director of college scouting. “If he’s got quick feet, if he has good hips and can change direction, if he can track the ball, that doesn’t change no matter the field you're playing on.”

Turns out there's quite a few draft prospects playing on HBCU fields this season.

Florida A&M pass rusher Isaiah Land is a potential Day 2 pick. Wide receiver Shaquan Davis could be the next star out of South Carolina State, which in recent years produced Shaq Leonard and Javon Hargrave. Bethune-Cookman tight end Kemari Averett, who began his career with Lamar Jackson at Louisville, could soon join the Ravens quarterback in the NFL, and wide receivers Abdul-Fatai Ibrahim of Alabama A&M and Hampton's Jadakis Bonds also could get a shot.

Where they're coming from? That doesn't matter anymore.

The only thing that matters is what they can do.

“I'm a firm believer what you put in you're going to get out of it,” said Ibrahim, who would be the first Alabama A&M draft pick since Frank Kearse in 2011. “If I put in hard work day-in, day-out, the results are going to show eventually.”