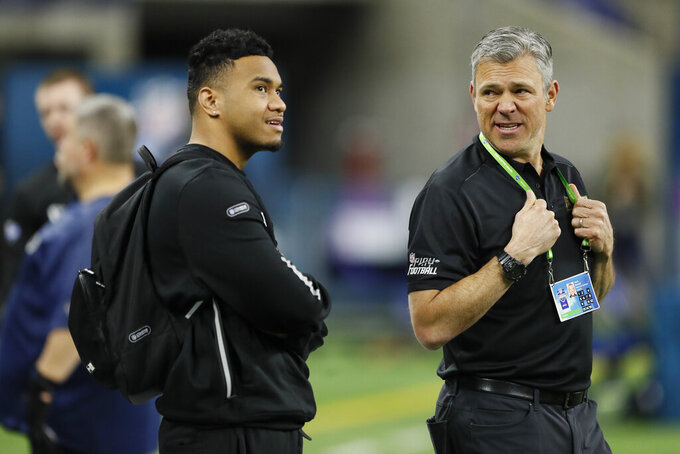 FILE - In this Feb. 27, 2020, file photo, Alabama quarterback Tua Tagovailoa, left, talks with NFL Legend Mark Brunell, right, at the NFL football scouting combine in Indianapolis. Mark Brunell knows his 19-year NFL career is one to make today's NFL quarterback prospects envious. What he wanted them to avoid was starting out like he did. The former Jacksonville Jaguars star just wrapped up his fifth season serving as a mentor at the NFL scouting combine, where he and fellow alum Chad Pennington guided the soon-to-be rookies through the week as they're poked and prodded, tested and interrogated. (AP Photo/Charlie Neibergall, File)

INDIANAPOLIS (AP) — Mark Brunell would love to see the members of 2020 class of quarterbacks have a long career like him. What he doesn't want them to do is start out like he did.

The former Jaguars star just wrapped up his fifth season serving as a mentor at the NFL scouting combine, where he and fellow QB alum Chad Pennington guided the soon-to-be rookies through a week of poking, prodding, testing and interrogation.

"This is the most important job interview of their lives and a lot of them come in with obviously high expectations. They're nervous, they're overwhelmed, they're stressed out because they realize how many sets of eyes are on them: GMs, personnel guys, coaches," Brunell said.

"... They're being evaluated in everything they do, so they're trying to put their best foot forward and we try to help them."

These tips are more about sitting up straight than reading a Cover-2.

"These guys know how to throw and run. They're football players -- but how to approach an interview? How to answer a question?" Brunell said.

This year's group of 14 combine mentors included Amani Toomer, Steven Jackson, and Hall of Famers John Randle and Rod Woodson. All are members of the NFL Legends Community, launched in 2013 as a way to connect the game's greats with today's pros and tomorrow's prospects.

"You can look at these guys like celebrities, but it's celebrities that you can reach out to," said Arkansas defensive lineman McTelvin Agim, whose mentor was Mike Rucker. "You can actually reach out to him and text him and say in this situation, what would you have done? If there's one thing you could change, what would it be?

Brunell regrets he didn't have just these kinds of tutors when he came to the combine in 1993 after a so-so career at the University of Washington.

"I wish I had someone like me back in 1993, just somebody to ask questions of, a veteran guy who had been through the process," Brunell said. "It would have been very helpful because I didn't know anything, I got a late invite to the combine. I was fortunate to be there. I didn't play a lot in college, my sophomore year, a little bit my senior year. I came into the combine very raw, not knowing anything. So, that would have been helpful."

Brunell tells the prospects, “It only takes one team to fall in love with you,” and who does he hold up as a prime example?

He had just two interviews at the combine in '93, with the Browns and Chiefs, “and I think I got Kansas City because they brought some cameras in there just doing a combine documentary on how the interviews go.”

He later made an impression in Green Bay, which selected him in the fifth round.

"The only reason I got drafted is because I reminded Mike Holmgren of Steve Young," Brunell said. "That was my in. It only takes one team to like you."

He also gathered all of this year's QB prospects and brought up a more recent example.

“I said a year ago, there was a kid just happy to be at the combine, had some good stats in college, he was hoping to get drafted but he knew he was probably a late-round draft pick in all likelihood. If he wasn't drafted, he was hoping to get on a team as a free agent. His expectations were high, but he came in realistic. He came in here and he just relaxed, he was himself, he just did his best,” Brunell said.

"That was a year ago. I said, 'Today, he's the starting quarterback for the Jacksonville Jaguars.'"

"The easy story is Joe Burrow has a magical season, wins the Heisman, wins the national championship, we can see how that's going to play out," Brunell said. "But it's those fifth- and six-round picks, it's the Tom Brady stories, it's the Gardner Minshew stories, that I think is the coolest thing about this whole process."

Also pretty cool is watching players get their mentor's cell phone numbers and even approaching mentors at other positions.

Randle, naturally, brings those Hall of Fame credentials to the initiative.

"To actually see John Randle in person I was pretty stoked," said Texas A&M D-lineman Justin Madubuike. "I used to watch his film of the Vikings when I was in high school and to see him in person and to meet him and talk to him was pretty spectacular. It's pretty incredible. John Randle's one of the greats in the NFL. And to have him in your corner and he tells you that if you need to talk about anything just let me know, it helps a lot."

"Yeah, he's a legend," said TCU D-tackle Ross Blacklock. “I just want to be able to soak up all the knowledge from a legend like him.”

"I think he's one of the greatest DBs to ever play the game. So just be able to be around him in his presence and just learn" is so beneficial, Okudah said, "because I want to have a smooth rookie season. So I'm always asking what you did this way, what did you do that way and just trying to try to learn everything I can."

Brunell, entering his eighth season as a high school head coach at the Episcopal School of Jacksonville, said the mentors talk about how much they enjoy giving back to the game that gave them so much — and still does.

"I love the game and it's just a really great place to be because I think of all the people who had a huge influence in my life, for the most part it was on the football field," Brunell said. “So, to influence that for somebody else is special.”