NFL news dominates headlines, even during the offseason 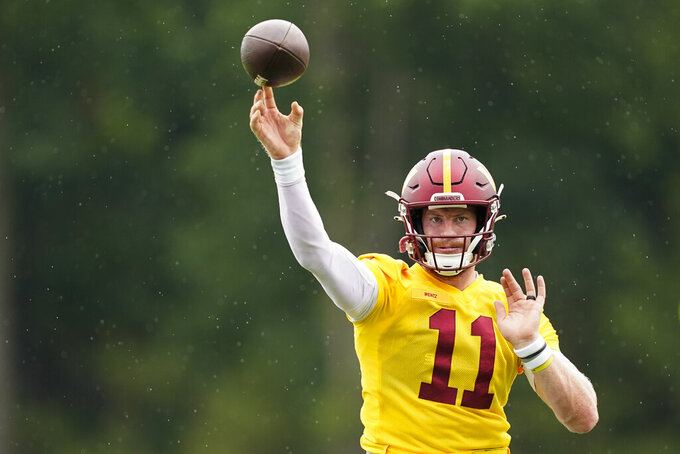 After one of the wildest offseasons in NFL history featuring blockbuster trades, rapid free-agency movement, record-setting contracts and plenty of off-field drama, the regular season is almost here.

Are you ready for some football?

The Buffalo Bills visit the defending Super Bowl champion Los Angeles Rams in two weeks to kick off the season in prime time.

If the action on the field matches the offseason excitement, it’ll be a season for the ages.

NFL news dominated sports headlines throughout the spring and summer.

Tom Brady retired in February, returned in March, took an 11-day break from training camp in August and enters his third season with the Tampa Bay Buccaneers seeking his eighth Super Bowl ring at age 45.

Russell Wilson, Matt Ryan, Carson Wentz and Baker Mayfield were among the quarterbacks on the move. Tyreek Hill, Davante Adams, A.J. Brown and Amari Cooper led the list of star wide receivers who also were traded.

Deshaun Watson was dealt from Houston to Cleveland but the Browns will have to wait three months for the three-time Pro Bowl quarterback to make his debut. Watson must serve an 11-game suspension as part of a settlement with the NFL following accusations of sexual misconduct by two dozen women.

Former Dolphins coach Brian Flores filed a racial discrimination lawsuit against the league before the end of last season. Miami was penalized for tampering with Brady and coach Sean Payton, who stepped down after 15 seasons in New Orleans.

Those were the biggest stories that kept the NFL atop news cycles. Now, attention turns to playing the games and finding out who will hoist the Lombardi Trophy in Arizona in February.

Matthew Stafford and Sean McVay will try to become the first QB-coach duo to win consecutive Super Bowls since Brady and Bill Belichick did it in New England in 2003-04. The Rams, however, must replace seven starters, including Von Miller.

The Buccaneers also have a new coach. Bruce Arians retired and was replaced by defensive coordinator Todd Bowles.

“You either get the job done or you don’t,” Brady said. “There’s only one team that is really happy at the end of the year and it is the team that wins.”

The Cowboys could emerge into a championship contender but Dallas will have a tough time holding off Philadelphia in the NFC East, which hasn’t seen a repeat division winner since the Eagles won four titles in a row from 2001-04.

Josh Allen and the Bills are the odds-on favorites in a conference filled with competitive teams. Buffalo has to find a way to get past its playoff failures after last season’s collapse in Kansas City.

The Bills have the league’s most talented roster, boasting a dynamic offense and a stingy defense. Winning in January is the biggest obstacle Buffalo has to overcome.

“Nothing we did last year is going to carry over to this year,” Allen said.

Like the Packers, the Chiefs traded away their top receiver, sending Hill to Miami. But Patrick Mahomes still has Travis Kelce and other playmakers around him.

Kansas City’s road through the AFC West has never been more challenging. The Chiefs have to go through Justin Herbert and the Chargers, Wilson and the Broncos and Derek Carr and the Raiders.

Meanwhile, don’t count out the Bengals. They have to avoid the hangover that often plagues teams coming off a loss in the Super Bowl. If a retooled offensive line protects Joe Burrow, who was the most-sacked quarterback in the league last year, Cincinnati should be in the mix.

Eighteen weeks, 272 games and then playoffs.