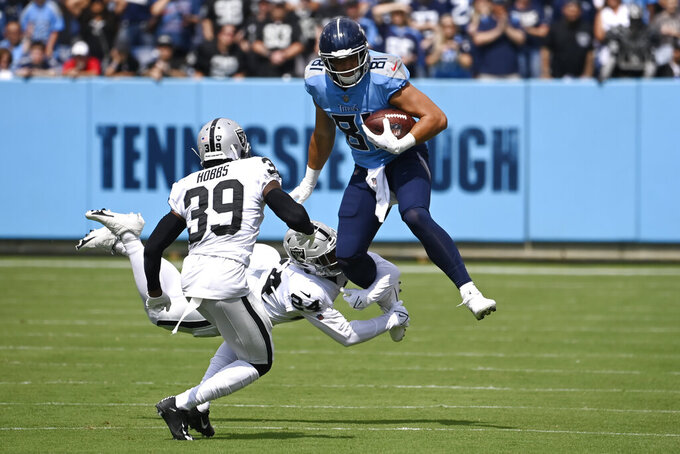 Now, as the Tennessee-Indianapolis rivalry resumes Sunday, two of the league's star backs — the former champ and the current one — will vie for the title of AFC South rushing king.

“It’s always a battle and they have a good run defense,” Henry said Thursday. “It’s always a challenge and has always been a challenge. You have to get your mind right for Sunday and it starts out there.”

Time will tell whether last season's results represent a true changing of the guard.

Henry, the 2015 Heisman Trophy winner, topped the 1,000-yard mark each of his first two seasons as the Titans starter and 2,000 in his third. Last year, despite missing the final nine regular-season games, Henry still finished ninth in the league with 937 yards.

Facing Indy (1-1-1) could help. Tennessee (1-2) hopes Henry can be as dominant this week as he's been historically against the Colts. In 12 games, he's rushed for 1,045 yards and six TDs, and he had four straight 100-yard outings before hurting his foot at Indy last October.

“He's like a locomotive and once he gets rolling it's tough to stop that motion,” Colts linebacker Zaire Franklin said. “For us, it's really make sure that when he stops his feet to get to him, cut off those running lanes so he doesn't just get flying down there.”

Taylor's trajectory has been equally impressive.

He's one of three FBS players with multiple 2,000-yard seasons and nearly became the first to achieve the feat three times. Taylor ran for more than 1,000 yards as a rookie, then emerged as a star last season with 1,811 yards and 18 TDs, both league bests, along with a league-high 2,171 yards from scrimmage.

This year, Taylor ranks fourth in the league in yards per game (95.3) despite only logging nine carries at Jacksonville and being held in check by Kansas City. This week, he faces the league's 29th-ranked run defense.

“I don't know that it's a throwback game because we both play offense, so they've done that (run first) a lot of times in my career,” Taylor said. “I just always like to be wherever they need me, when they need me at a high level.”

Indy's defense has allowed the third fewest yards rushing per game (77.0) and hasn't allowed any back to top 64 yards this season. The Colts want to prove they can hold up against an old nemesis, too.

“It's a mindset — we've got to stop the run, we've got to be No. 1 in the run game,” three-time All-Pro Shaquille Leonard said. “For me, as a linebacker, if you knock out the run, you know what's coming. It's got to be the pass so that's what we want to do — stop the run, make the quarterback beat us with his arm.”

Titans defensive tackle Jeffrey Simmons knows all about Quenton Nelson — and how some consider the three-time All-Pro the league's best guard. After earning his first Pro Bowl trip last year, Simmons promises to be ready for a heavyweight bout.

“He’s going to have to line up and play football when it comes down to it, which is what I’m going to do Sunday,” Simmons said.

Even with Nelson, the Colts have been dogged all week by questions about an offensive line that has already allowed 12 sacks and struggled to open the gaping holes Taylor enjoyed last season. The problems have led to speculation about lineup changes that do not appear imminent and Nelson, among others, is ready to change directions Sunday.

“It's understanding what we need to be better at,” center Ryan Kelly said. “This is a league where if somebody sees something one week, they're going to do it another. So until we put a stop to it, it's going to keep bleeding. For us, it's about just figuring it out."

A year ago, Tennessee quarterback Ryan Tannehill was sacked 47 times, the NFL's second-highest total behind Cincinnati's Joe Burrow. This year, Tannehill has only taken four sacks behind a line with two new starters — rookie right tackle Nicholas Petit-Frere of Ohio State and Aaron Brewer at left guard — and that lost three-time Pro Bowl left tackle Taylor Lewan to a knee injury in a blowout loss at Buffalo.

“We put a lot of focus and attention on that throughout the offseason,” Tannehill said. “It is really a full unit thing, right? It is the blocking up front, it is myself getting the ball out and receivers winning in a quick time so the ball can come out.”