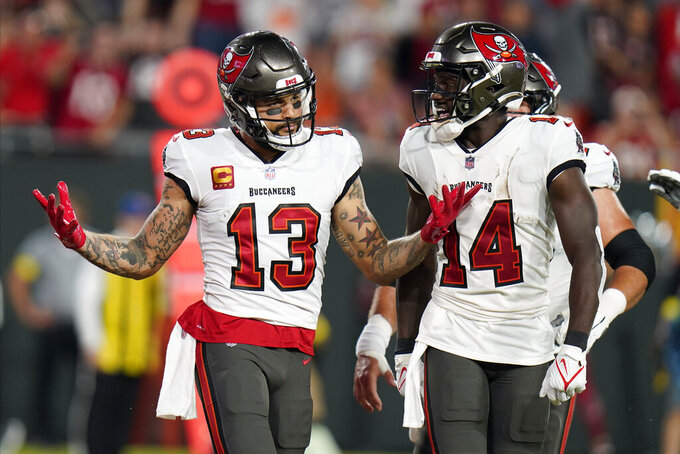 Tampa Bay Buccaneers wide receiver Mike Evans (13) celebrates after a touchdown during the first half of an NFL football game against the Kansas City Chiefs Sunday, Oct. 2, 2022, in Tampa, Fla. (AP Photo/Chris O'Meara)

NEW YORK (AP) — The NFL says the two game officials seen interacting with Tampa Bay wide receiver Mike Evans in the tunnel of Bank of America Stadium after the Buccaneers’ 21-3 loss to the Carolina Panthers on Sunday didn’t ask for an autograph.

“After speaking with the individuals involved, we have confirmed that the postgame interaction between Jeff Lamberth, Tripp Sutter and Mike Evans did not involve a request by the game officials for an autograph,” the league said in a statement Tuesday. “Both Lamberth and Sutter have been reminded of the importance of avoiding even the appearance of impropriety when interacting with players, coaches, and club staff on gameday — including during the pregame and postgame time periods.”

A reporter captured a video of Lamberth and Sutter approaching Evans as he made his way toward the locker room at the stadium in Charlotte, North Carolina. There was a short, inaudible exchange between the game officials and Evans, before the four-time Pro Bowl wideout turns around and is handed a slip of paper. A second video appears to show Evans writing something as Lamberth stood next to him while Tampa Bay players walked past them to the locker room.

“I wasn't signing my autograph, I'll tell you that,” Evans said after the Buccaneers' practice Tuesday in Tampa, Florida.

“I talk to a lot of officials. We're all human beings. He's a nice guy,” the eight-time 1,000-yard receiver added. “We were just talking about golf. That's all we were talking about.”

According to the collective bargaining agreement between the NFL and the NFL Referees Association, game officials are not allowed to “ask players, coaches or any other team personnel for autographs or memorabilia.”

The CBA goes on to stipulate that game officials may need to obtain player autographs or team merchandise or memorabilia for personal or charitable purposes, but said that such requests should be made through the officiating department and never to a player or team employee directly.