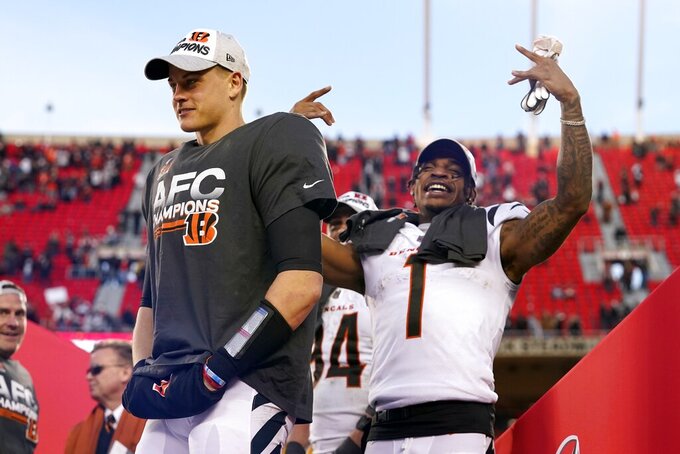 Super Bowl 56, Cincinnati Bengals vs. Los Angeles Rams at SoFi Stadium in Inglewood, California, 6:30 p.m. EST. Los Angeles (15-5) will be playing its second Super Bowl in four seasons under coach Sean McVay, while the Bengals (13-7) made their most recent appearance 33 years ago. Both teams had to beat the last two Super Bowl-winning quarterbacks on the road: The Rams got past Tom Brady and Tampa Bay in the divisional round, and the Bengals beat Patrick Mahomes and Kansas City in the AFC title game. Although overshadowed somewhat by Brady, Aaron Rodgers and Mahomes during the regular season, LA's Matthew Stafford and Cincinnati's Joe Burrow were two of the league's best quarterbacks, and each has a fearsome go-to target in the Rams' Cooper Kupp — who led the NFL in receptions, yards receiving and touchdown catches — and Bengals rookie sensation Ja'Marr Chase.

— Matthew Stafford, Rams, went 31 of 45 for 337 yards, two touchdowns and an interception, leading Los Angeles' fourth-quarter rally from a 10-point deficit for a 20-17 win over San Francisco in the NFC title game.

— Joe Burrow, Bengals, went 23 of 38 for 250 yards, two touchdowns and one interception, leading Cincinnati's second-half rally past Kansas City for a 27-24 win in overtime of the AFC title game.

— Patrick Mahomes, Chiefs, finished 26 of 39 for 275 yards but threw all three of his touchdown passes in the first half of Kansas City's loss. He was intercepted once in the third quarter and again in overtime on his final pass of the day.

— Joe Mixon, Bengals, had 21 rushes for 88 yards in Cincinnati's victory.

— Jerick McKinnon, Chiefs, was Kansas City's leading rusher with 65 yards on 12 carries and had three receptions for 30 yards in defeat.

— Tee Higgins, Bengals, caught six passes for 103 yards in Cincinnati's victory. Ja’Marr Chase, Bengals, was held in check with six receptions for 54 yards, but his 2-yard touchdown catch late in the third quarter allowed the Bengals to tie the game at 21 after the 2-point conversion

— Deebo Samuel, 49ers, was San Francisco's leading receiver with four catches for 72 yards and a touchdown.

— Evan McPherson, Bengals, was 4 of 4 on field goals, including a 31-yard winner in overtime and a 52-yarder in the fourth quarter that gave Cincinnati the lead.

— Matt Gay, Rams, made the tying field goal from 40 yards and the go-ahead kick from 30 yards in Los Angeles' NFC championship win. Gay missed a 54-yard attempt in the first half.

— Harrison Butker, Chiefs, made a 44-yard field goal as time expired in regulation to send the AFC title game to OT.

— Vonn Bell, Bengals, intercepted Mahomes on a tipped ball on Kansas City's first possession of overtime, setting up Cincinnati to drive for the winning field goal.

— B.J. Hill, Bengals, intercepted Mahomes on a ball tipped near the line of scrimmage in the third quarter, setting up Cincinnati's tying touchdown and 2-point conversion. Hill also combined with Trey Hendrickson on a sack to force a three-and-out. Hendrickson finished with 1 1/2 sacks, both of which forced the Chiefs to go three-and-out. His second sack set up Cincinnati's go-ahead field goal in the fourth quarter.

— Jimmie Ward, 49ers, intercepted the Rams' Matthew Stafford in the end zone on third-and-goal, keeping the game scoreless in the first quarter.

The Bengals advanced to their third Super Bowl in franchise history and first since the 1988 season, ending the sixth-longest Super Bowl drought among active franchises. The Jacksonville Jaguars have never been to the Super Bowl but did not exist when Cincinnati last made it; the teams with longer droughts are Detroit, Cleveland, the New York Jets, Minnesota and Miami. ... Cincinnati's 18-point comeback matched the largest in the AFC title game. Indianapolis rallied from 18 points down to beat New England 36-34 in the 2006 season. ... The Rams advanced to their fifth Super Bowl and the franchise will seek its second NFL title. They lost Super Bowl 53 three years ago to Tom Brady and the New England Patriots. The franchise previously made two Super Bowls while playing in St. Louis, winning one, and one during its first stint in Los Angeles.

The Rams ended a streak of six straight losses to the division rival 49ers. ... The Bengals went 2-14 in 2019 and 4-11-1 last season before winning the AFC North at 10-7 this season and winning three playoff games to reach the Super Bowl. ... Rams coach Sean McVay is 55-26 in five seasons, not including playoffs, with a winning record every year, while the Bengals' Zac Taylor is 16-32-1 in the regular season. ... Bengals kicker Evan McPherson is 12 for 12 on field goals in the playoffs, three makes from breaking Adam Vinatieri's record for one postseason.

TOP OF THE DRAFT

This will be the second Super Bowl with two starting quarterbacks who were both No. 1 overall picks. Cincinnati's Joe Burrow went first in 2020, while the Rams' Matthew Stafford was the top selection in 2009.

The other came six years ago when Denver's Peyton Manning (1998) faced Carolina's Cam Newton (2011). The Broncos won that Super Bowl.

The 49ers were at their worst when it mattered most.

San Francisco had beaten the division rival Los Angeles Rams six straight times and looked like it would make it seven when it led 17-7 in the fourth quarter.

But coach Kyle Shanahan's decision to punt on fourth-and-2 in Rams territory came back to haunt the Niners, who gave up a tying field goal and then failed to gain positive yardage on a single play in their final two possessions.

“Both teams had their opportunities,” Shanahan said. “I thought we had them on the ropes, but we gave them a chance. When you give those guys too many chances, eventually they are going to make them.”

TAKE HIS RED FLAG AWAY?

Rams coach Sean McVay unsuccessfully challenged two calls in the second half, failing to overturn a fourth-down spot for his offense or a potential fumble by the 49ers. The decisions — and another wasted timeout on a first-down play — left Los Angeles with no timeouts and 10:01 remaining.

The Rams came back and won anyway, but McVay's eager use of the challenge flag will surely be questioned in the lead-up to the Super Bowl.

The Kansas City Chiefs needed just 13 seconds to drive into field goal range at the end of regulation in their thrilling divisional-round matchup with Buffalo. The same amount of time didn't work out so well on Sunday.

Kansas City had the ball at the Cincinnati 5-yard line with 13 seconds before halftime, but Patrick Mahomes threw incomplete on first down. On second down, he completed a short pass to Hill, who was stopped short of the goal line as the clock expired. Kansas City took a 21-10 lead into halftime and didn't score again until a tying field goal at the end of regulation.

The Bengals raised some eyebrows when they picked kicker Evan McPherson in the fifth round of the draft out of Florida, the only player selected at his position.

McPherson had a solid regular season, going 28 of 33 on field goals. Then he really started proving his worth in the playoffs: He's been a perfect 12 for 12, three field goals from breaking Adam Vinatieri’s NFL record for one postseason.

He booted a 52-yarder as time expired to give Cincinnati a 19-16 win over Tennessee in the divisional round, then connected from 31 yards in overtime against Kansas City to send the Bengals to the Super Bowl.

The confident 22-year-old admitted getting ahead of himself before that last kick.

“It was going through my head,” McPherson said, “that there was a good chance we were going to the Super Bowl.”

CBS' halftime show didn't stand a chance, not with host James Brown and his panel of analysts broadcasting from the sideline of Arrowhead Stadium. Their midgame analysis was drowned out by country star Walker Hayes as he performed his hit “Fancy Like,” the music booming from huge amplifiers behind the CBS hosts' desk.

Boomer Esiason was chuckling as Nate Burleson, sitting right next to him, offered his take on the game.

“I have no idea what you just said. I can't hear a thing!” Esiason said.

Hayes offered a lighthearted apology for the intrusion.

“As a massive sports fan I was so jacked to perform halftime at the game, I just couldn’t wait to get in the stadium,” Hayes said. “We didn’t think our performance would be broadcast — so to see what’s happened, I mean, you can’t make this up! I guess we made broadcast after all!

Bengals tight end C.J. Uzomah twisted his left knee as a pass bounced off his hands late in the first quarter against the Chiefs. His left knee was caught beneath him at a grotesque angle, and Uzomah didn't put any weight on his left foot as he bounced to the sideline. He was taken to the locker room in a cart. ... Chiefs backup tight end Noah Gray was hurt in the second quarter on Kansas City's punt return team. ... Rams tight end Tyler Higbee suffered a knee injury in the first quarter against the 49ers and didn't return. ... Two San Francisco linebackers, Dre Greenlaw (calf) and Demetrius Flannigan-Fowles (knee) were hurt. ... Niners defensive lineman Arden Key was evaluated for a concussion. ... Rams running back Cam Akers (shoulder) and receiver Van Jefferson (knee) missed time in the first half, but returned.

— “I think if you would have told me before the season that we’d be going to the Super Bowl, I probably would have called you crazy. Then, you know, we play the whole season and nothing surprises me now.” — Bengals quarterback Joe Burrow.

— “When you’re up 21-3 at any point in the game, you can’t lose it. I put that on myself.” ” Chiefs quarterback Patrick Mahomes.

— “I think we knew what a great team this was, but our guys genuinely knew that what happened in the previous six games had nothing to do with what was going to happen when we kicked this one off.” — Rams coach Sean McVay on his team’s struggles against San Francisco.