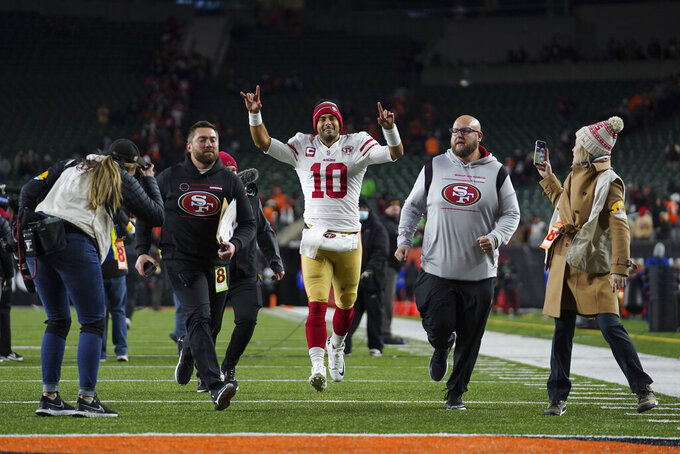 Los Angeles Rams at Arizona, 8:15 p.m. EST. The NFL-leading Cardinals (10-2) can really put the clamps on the NFC West with a win over Los Angeles. The Rams (8-4) are in solid shape for a playoff berth no matter what happens in this game, but their recent three-game losing streak didn't end until a matchup with Jacksonville showed up on the schedule. Arizona beat the Rams 37-20 in October in what at the time was a meeting of unbeatens. Kyler Murray threw for 268 yards and two touchdowns for the Cardinals. Matthew Stafford of Los Angeles threw for 280 yards and two TDs with an interception.

— Jimmy Garoppolo, 49ers, threw a 12-yard touchdown pass to Brandon Aiyuk to give San Francisco a 26-23 overtime win over Cincinnati.

— Josh Allen, Bills, threw for 308 yards and two touchdowns and also ran for 109 yards and a TD, but it wasn't enough in Buffalo's loss to Tampa Bay.

— Rashaad Penny, Seahawks, ran for a career-high 137 yards with two touchdowns in Seattle's 33-13 victory over Houston.

— Alvin Kamara, Saints, ran for 120 yards and a touchdown to lead New Orleans to a 30-9 win over the New York Jets.

— Breshad Perriman, Buccaneers, scored the winning touchdown on a 58-yard catch-and-run with 5:31 left in overtime against Buffalo.

— Davante Adams, Packers, had 10 receptions for 121 yards and two touchdowns in Green Bay's 45-30 win over Chicago.

— Hunter Renfrow, Raiders, had 13 catches for 117 yards and a TD in his team's loss to the Chiefs.

— Jakeem Grant, Bears, returned a punt 97 yards for a touchdown in Chicago's 45-30 loss at Green Bay.

— Kaʻimi Fairbairn, Texans, set a franchise record with a 61-yard field goal as time expired in the second quarter of the loss to Seattle.

— Justin Tucker, Ravens, made field goals of 50, 42 and 55 yards in a losing effort for Baltimore.

— Mike Hughes, Chiefs, forced two fumbles and returned another 23 yards for a touchdown to lead Kansas City to a 48-9 rout of Las Vegas.

— Micah Parsons, Cowboys, sacked Taylor Heinicke twice and forced a fumble that was returned for a touchdown, helping Dallas to a 27-20 victory over Washington.

— Myles Garrett, Browns, sacked Tyler Huntley, forced a fumble and ran it back for a touchdown on a key second-quarter play in Cleveland's win over Baltimore.

— Mykal Walker, Falcons, returned an interception 66 yards for a touchdown in Atlanta's 29-21 win over Carolina.

— Rasul Douglas, Packers, returned an interception 55 yards for a TD in Green Bay's 45-30 win over Detroit.

The Jets lost to New Orleans 30-9 and were eliminated from playoff contention. They've missed the postseason 11 straight years, the longest active drought in the NFL. It also ties the franchise’s longest skid set from 1970-80. ... Parsons became the first rookie since Jevon Kearse in 1999 and third in NFL history to have at least one sack in six consecutive games. ... Jacksonville lost its fifth straight game, 20-0 at Tennessee. It was also the Jaguars' eighth straight loss in Nashville, ninth consecutive in AFC South play and 15th in a row on the road. ... Carolina has lost five straight at home after falling to Atlanta. Cam Newton has lost his last 11 starts as Carolina’s starting quarterback dating to 2018. ... Houston rookie Davis Mills completed his first 14 pass attempts against Seattle.

The winning toss to Perriman was the 700th touchdown pass of Brady's career, including playoffs. ... Buffalo's Allen became the fourth player in league history to throw for over 300 yards and also rush for at least 100 in the same game. ... Kansas City's 39-point victory eclipsed the record margin in its series with the Raiders, which had been 35 points. ... Garrett's sack against Baltimore broke his team's single-season sacks record. He'd been sharing the mark with Reggie Camp, who had 14 in 1984. ... Seattle coach Pete Carroll earned his 150th regular-season win. Tyler Lockett of the Seahawks now has 1,023 yards receiving this season. He joins Hall of Famer Steve Largent as the only players in franchise history with at least 1,000 yards receiving in three straight seasons. ... Herbert became the first player to reach 30 touchdown passes in his first two seasons. He also has the most completions by a player through his first two seasons (734). ... Kittle, who had 181 yards receiving in Week 13, became the first tight end in NFL history with at least 150 yards receiving and a touchdown catch in consecutive games. ... Aaron Rodgers' 61 touchdown passes against the Bears are the most anyone has thrown against Chicago. Brett Favre, Rodgers' predecessor as the Packers' quarterback, had 60 TD passes against the Bears.

Jacksonville quarterback Trevor Lawrence was intercepted four times in his team's loss. Washington's Taylor Heinicke went 11 of 25 for 122 yards with a touchdown and an interception, and he lost a fumble that was run back for a TD. Washington had four turnovers, Jacksonville had four and Carolina had three. Las Vegas had five, with QB Derek Carr losing a fumble and throwing an interception. Chicago's Justin Fields threw two interceptions and fumbled once against Green Bay.

San Francisco's overtime win over Cincinnati had a big impact on the postseason race in both conferences. It gave the 49ers (7-6) sole possession of the second wild card in the NFC, with five teams — Washington, Philadelphia, Minnesota, Atlanta and New Orleans — tied for the final spot at 6-7. The Bengals (7-6) remained behind Baltimore (8-5) in the AFC North. The Ravens have lost two in a row but still lead that division over Cleveland (7-6) and Cincinnati. ... Buffalo's OT loss at Tampa Bay left the Bills (7-6) tied with Cleveland, Cincinnati, Indianapolis and Denver for the last two playoff spots in the AFC.

Lamar Jackson was injured on the first play of the second quarter, and Baltimore's star quarterback did not return because of a sprained right ankle. Backup Tyler Huntley threw for 270 yards in a losing cause. ... Heinicke left the Washington-Dallas game with an injured left knee that he said afterward should be OK. ... Detroit promoted several players from the practice squad over the weekend. The Lions had seven players on the COVID-19 list Sunday. ... Seattle cornerback Gavin Heslop was carted off the field with a left leg injury against Houston. Carroll said the injury was serious. Heslop was expected to spend the night in Houston.

“The best way to honor his legacy is to go out and play great football,” — Broncos quarterback Teddy Bridgewater, whose team beat Detroit three days after former Denver receiver Demaryius Thomas died at his Georgia home at age 33.

“I was laughing, to be honest. At the end of the game, guys running into each other? I don’t want to say too much on it, but I was talking trash to them a little bit. It’s tough for them boys over there." — Titans safety Kevin Byard on two Jaguars receivers colliding during a 20- shutout of Jacksonville.