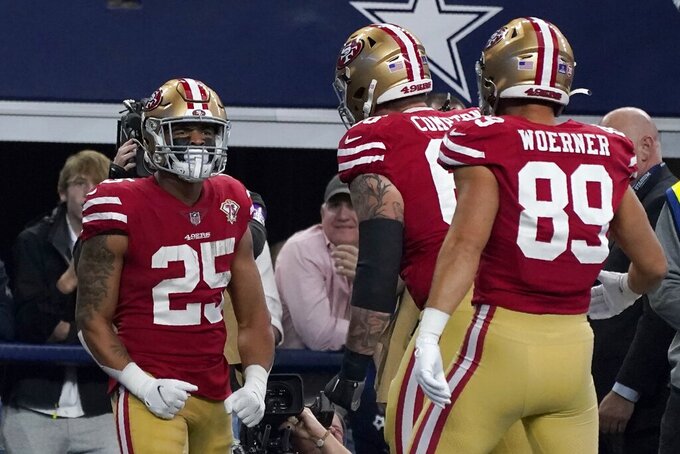 Arizona at Los Angeles Rams, 8:15 p.m. EST. Arizona quarterback Kyler Murray makes his postseason debut for the Cardinals (11-6), who split two regular-season games against the NFC West-rival Rams (12-5). Los Angeles quarterback Matthew Stafford is looking to win his first playoff game after three losses during his 12 previous seasons with Detroit. It will be the second playoff game between the longtime opponents; Los Angeles defeated the St. Louis Cardinals in the 1975 postseason.

— Josh Allen, Bills, set a franchise record by throwing five touchdown passes in Buffalo's 47-17 throttling of New England on Saturday night. He finished 21 of 25 for 308 yards and also ran for 66 yards in the Bills' first playoff victory since 1991.

— Tom Brady, Buccaneers, threw for 271 yards and two touchdowns, helping Tampa Bay launch its bid for a return to the Super Bowl with a dominating 31-15 NFC wild-card playoff victory over Philadelphia on Sunday.

— Joe Burrow, Bengals, went 24 for 34 for 244 yards and two touchdowns while leading Cincinnati to its first playoff victory in 31 years, 26-19 over Las Vegas on Saturday.

— Devin Singletary, Bills, ran for 81 yards and two touchdowns, both in the first half, on 16 carries in Buffalo's 47-17 victory over New England.

— Ke'Shawn Vaughn and Giovani Bernard, Buccaneers, each ran for a touchdown in Tampa Bay's 31-15 win over Philadelphia.

— Travis Kelce, Chiefs, caught a TD pass and threw another one, and finished with five receptions for 108 yards in a 42-21 victory over Pittsburgh.

— Mike Evans, Buccaneers, had 117 yards receiving and a touchdown on nine catches in Tampa Bay's 31-15 victory over Philadelphia.

— Evan McPherson, Bengals, became the first rookie to make four field goals without a miss in a postseason debut, helping Cincinnati to a 26-19 victory over Las Vegas.

— Robbie Gould, 49ers, made three field goals, including kicks of 53 and 52 yards, in San Francisco's 23-17 win at Dallas. He also became the career leader for makes in the playoffs without a miss at 18.

— T.J. Watt, Steelers, returned a fumble for a touchdown and had a sack in Pittsburgh's 42-21 loss at Kansas City.

— Micah Hyde and Levi Wallace, Bills, each had an interception in Buffalo's 47-17 victory over New England.

Buffalo became the NFL’s first team in the Super Bowl era to score on each of its seven possessions that didn’t end with a kneeldown, accomplishing the feat in the Bills' 47-17 rout of New England on Saturday night. ... New England's Nick Folk kicked a 44-yard field goal to extend his streak to 56 attempts made from under 50 yards. That matched the NFL record set by Tennessee’s Ryan Succop, whose mark spanned the 2014-17 seasons. Folk hasn’t missed a field goal attempt of 49 yards or less since missing a 45-yarder in the 2020 season opener against Miami. ... With Tampa Bay's 31-15 win over Philadelphia on Sunday, Tom Brady improved his playoff record to 35-11 in a record 46 postseason starts. He also threw two TD passes to extend his postseason record to 85. ... San Francisco's Robbie Gould became the career leader for made field goals in the playoffs without a miss with 18. ... Kansas City's Patrick Mahomes threw five TD passes in the Chiefs' 42-21 win over Pittsburgh on Sunday night. He joined Kurt Warner and Daryle Lamonica as the only players in NFL history with two or more playoff games with five or more TD passes. ... Chiefs tight end Travis Kelce became the first player in NFL history to throw a TD pass, catch a TD pass and have 100 or more yards receiving in a playoff game.

The margin of defeat in New England's 47-17 loss at Buffalo on Saturday night was the largest in the playoffs for the Patriots in coach Bill Belichick’s tenure, which began in 2000. New England’s previous worst playoff loss under Belichick was a 33-14 defeat to Baltimore also in the wild-card round on Jan. 10, 2010. ... The 30-point margin of victory and 47 points scored were the second most by the Bills in a playoff game behind a 51-3 win over the Los Angeles Raiders in the AFC championship game on Jan. 20, 1991. ... Tampa Bay is 20-0 with Tom Brady when leading at halftime, including 3-0 in the postseason.

IT'S BEEN A WHILE

Cincinnati's 26-19 victory over Las Vegas on Saturday was the Bengals' first postseason win since Jan. 6, 1991 — when they beat the Houston Oilers 41-14. Bengals coach Zac Taylor was 7 years old when Boomer Esiason threw two touchdown passes and ran for another score, and Ickey Woods and Eric Ball also had rushing TDs to top the Oilers.

Ben Roethlisberger is likely headed into retirement after Pittsburgh's 42-21 loss to Kansas City in the wild-card round of the playoffs on Sunday night. The 39-year-old quarterback was 29 of 44 for 215 yards with two meaningless TD passes late in the game, providing the coda to a career that includes six Pro Bowl trips and two Super Bowl wins.

Buffalo's 47-17 victory over New England on Saturday night was the fourth-coldest game in Bills history with a temperature of 7 degrees at kickoff, and the wind-chill making it feel like minus-4. The coldest game was played 28 years ago to the day in Buffalo’s 29-23 win over the then-Los Angeles Raiders 29-23 in a divisional playoff game when the game-time temperature was zero, with the wind-chill making the conditions feel like minus-32.

Dallas Cowboys linebacker Leighton Vander Esch’s name was misspelled on the back of his No. 55 jersey during warmups before the game Sunday against San Francisco. The “c” and “s” were transposed in his last name. Vander Esch was still wearing the botched jersey in the game. The fourth-year player is in the final year of his rookie contract after the Cowboys didn’t exercise the fifth-year option in their first-round pick from 2018. Vander Esch was the 19th overall choice.

San Francisco lost star pass rusher Nick Bosa to a concussion just before halftime of the 49ers' 23-17 win at Dallas on Sunday when he was crunched in the head and neck area by teammate D.J. Jones. ... Tampa Bay All-Pro right tackle Tristan Wirfs limped off with an ankle injury a little over a minute into the Buccaneers' 35-15 win over Philadelphia on Sunday. He returned briefly in the second quarter, before taking the rest of the day off. ... Philadelphia played without defensive end Josh Sweat, who was inactive after being admitted to the hospital and undergoing “an emergency procedure” for what the team described as a “life-threatening situation” earlier in the week. ... Cincinnati defensive tackle Mike Daniels injured his groin in the first quarter of the Bengals' 26-19 victory over Las Vegas on Saturday and did not return. Fellow DT Larry Ogunjobi was carted off early in the third period with a foot injury, while defensive end Trey Hendrickson went out with a concussion in the third.

— “That sounds like some Pop Warner stuff.” — Buffalo defensive tackle Harrison Phillips after the Bills scored on each of their seven possessions that didn’t end with a kneeldown in a 47-17 rout of New England on Saturday night.

— “It’s exciting for the city, for the state, but we are not going to dwell on that, we are moving forward. This is expected, this isn’t like the icing on top of the cake, this is the cake. So we are moving on.” — Cincinnati quarterback Joe Burrow after the Bengals won their first playoff game since 1991, 26-19 over Las Vegas on Saturday.

— “When you’ve been to the Super Bowl the last two years and you walk off that field with a loss last year, you want to go back and get that revenge, get that win.” — Kansas City's Patrick Mahomes after the Chiefs advanced to the divisional round with a 42-21 victory over Pittsburgh.