Not a concern? Tua Tagovailoa still without 3 starting WRs 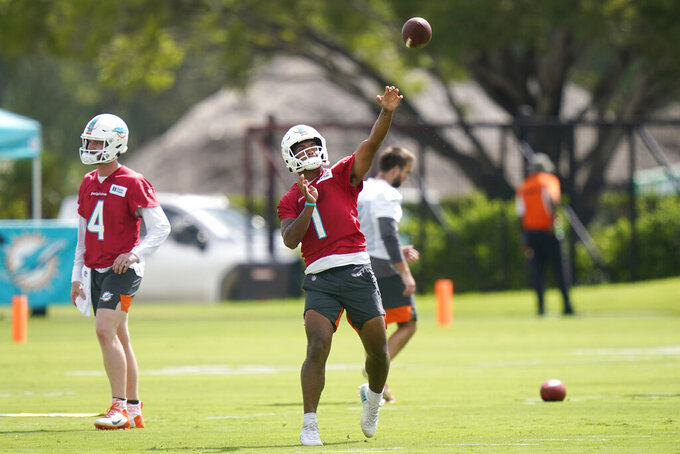 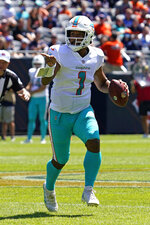 MIAMI GARDENS, Fla. (AP) — When the Miami Dolphins practiced with and against the Atlanta Falcons on Wednesday, Tua Tagovailoa once again was without the three wide receivers listed as starters on the team’s depth chart.

The second-year quarterback says it’s not a big deal that veterans DeVante Parker, Will Fuller and Albert Wilson continue to miss practice.

"It gives a lot of opportunity to the other guys, for me to get work with them, and for them also to experience a lot of the different looks, the coverages," Tagovailoa said after practice. "Whereas a lot of the veterans that are injured, they’ve seen a lot of that.

"We’re all still in the same meetings, communicating and talking through that, so I don’t think it’s a concern at all.”

Fuller has been out since the first practice of camp, while Parker and Wilson have been out of action for more than a week. None of the three played in the Dolphins’ exhibition opener at Chicago last Saturday, and it’s unlikely they'll play against the Falcons on Saturday.

Fuller, the Dolphins' most significant veteran acquisition last offseason, has one game left on a six-game suspension and will miss Week 1 at the New England Patriots even if he’s healthy.

Coach Brian Flores said all three sidelined receivers are day to day and “getting closer” to returning.

Their absences have provided more opportunities for first-round pick Jaylen Waddle, as well as some of the young receivers trying to earn spots on the 53-man roster.

From his vantage point, those might be even more beneficial than exhibition games, which weren’t around last summer because of the COVID-related adjustments to the run-up to the regular season.

“Joint practices are really good because you get to see a good glimpse of the packages that these coaches have installed with the players on the defense and with their team,” Tagovailoa said. “I would say when it comes more time to the preseason games, they obviously don’t want to show everything. Us too. It’s like that around the league.”

Tagovailoa played well against the Bears, going 8 for 11 for 99 yards with no touchdowns and an interception.