OBJ feels Browns on verge of 'special' season in 2021 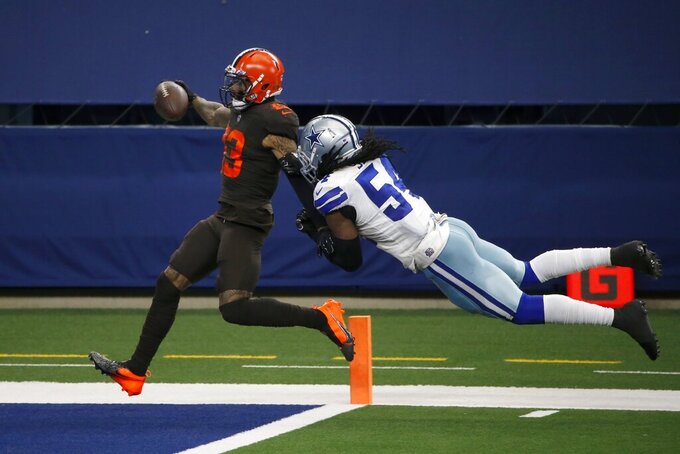 File-This Oct. 4, 2020, file photo shows Cleveland Browns wide receiver Odell Beckham Jr., (13) scoring a touchdown after a long run as Dallas Cowboys linebacker Jaylon Smith (54) attempts the stop in the second half of an NFL football game in Arlington, Texas. Beckham Jr. believes he and his teammates are poised to do something big this season. Appearing at his youth football camp, Beckham, who has made a speedy recovery from a season-ending knee injury in 2020, said there's a vibe about the Browns. (AP Photo/Michael Ainsworth, File)

The star wide receiver believes he and his Cleveland Browns teammates are poised to do something big.

Appearing at his youth football camp, Beckham, who has made a speedy recovery from a season-ending knee injury in 2020, said he has high hopes for this year's Browns.

“It’s just something that feels special about this team,” he said Sunday at Gilmour Academy. “I think there’s something special going on and something special with this city. Cleveland needs a championship. And I think that’s the goal and mentality in that building.

Beckham's comments were his first to media members since he got hurt early in a game at Cincinnati on Oct. 25.

While he was out, quarterback Baker Mayfield thrived and the Browns ended a long playoff drought and won their first playoff game — against rival Pittsburgh — since 1994. Cleveland lost to Kansas City in the division round.

Beckham said it was tough not being able to contribute.

“I watched them compete last year and it was like the one game that hurt me the most was watching Kansas City,” said Beckham, who came to Cleveland in a 2019 trade with the New York Giants. ”Feeling like, man, I know I could’ve made one play -- just something to help the team.”

The Browns will open training camp Wednesday with high expectations for 2021. Beckham moved well on the field during a recent minicamp, but would not say if he's 100 percent or if he'll be full go this week.

"At this point, we’re just running our race,” he said. “I feel like in the past, I’ve been caught up in this question. I’m not really here for it anymore. Whenever I’m ready to get out on the field, that’s when it will be.