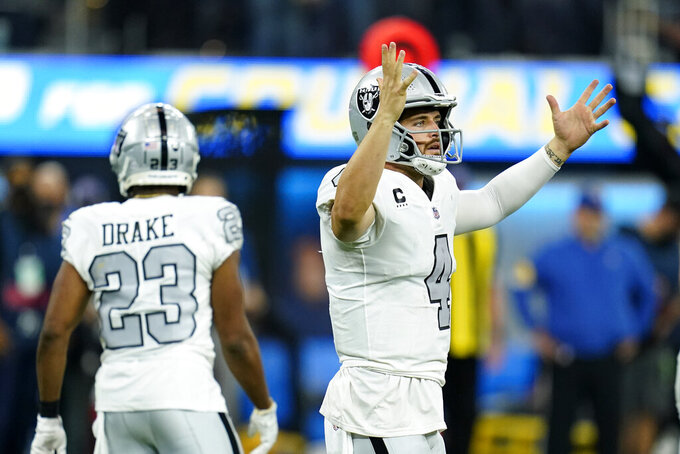 The offensive line problems that have plagued the Las Vegas Raiders early this season finally led to a loss.

The young group couldn't create any room in the running game or protect Derek Carr well enough against Joey Bosa and the Los Angeles Chargers in a 28-14 loss on Monday night.

“We’re not going to hit the panic button,” coach Jon Gruden said Tuesday. “We have to keep coaching and keep developing these guys. Sometimes the medicine is what we all need. We all need a taste of that medicine even if we don't like the taste. You have to get back to work and get back on the horse. That horse will throw you off sometimes.”

The Raiders (3-1) were held to 2.7 yards per carry against the Chargers and allowed a season-high four sacks as the offseason decision to overhaul the line by trading away veterans Rodney Hudson, Gabe Jackson and Trent Brown in cost-cutting moves came back to bite them.

While fourth-year left tackle Kolton Miller has been stellar in pass protection all season, there have been issues at the other four spots. Backup guards John Simpson and Jermaine Eluemunor struggled in place of injured starters Richie Incognito and Denzelle Good, rookie Alex Leatherwood has had a rough adjustment to right tackle in the NFL, and center Andre James has looked overmatched.

The Raiders managed to overcome those deficiencies to win their first three games, including two in overtime after falling behind 14-0, but couldn't climb out of a 21-0 hole against the Chargers.

“When you get knocked down three times in the first round, it's tough to win the fight,” Gruden said.

Deep throws to Henry Ruggs III. The Raiders called more deep shots for Ruggs with good success. Ruggs drew a 45-yard pass interference penalty against Asante Samuel Jr. on an underthrown ball from Carr to set up one TD and also caught a 51-yarder in the fourth quarter. Ruggs has caught four deep passes so far this season, one shy of the league lead and one shy of his total from last season.

Early offense. The Raiders once again struggled to get going offensively, failing to generate a first down on any of their first four drives. They went three-and-out on their first three possessions before being stopped on fourth down in the next drive. The Raiders had 51 yards of offense in the first half, the lowest ever for a Gruden-coached team. They have scored three points in the opening quarter on offense this season, ahead of only the Jets.

Hunter Renfrow. The third-year slot receiver keeps delivering big plays. He had six catches for 45 yards and his second TD of the season this week and may have provided the Raiders' play of the game late in the first quarter when he lined up as a punt returner. Renfrow noticed an uncovered gunner on the punt team when the Raiders had only 10 players on the field and raced nearly 19 yards, according to NextGen stats, to break up a pass on a fake punt to Tevaughn Campbell.

“One of the best plays I've ever seen,” Gruden said. “Effort, instincts, understanding the game and making a play.”

WR Bryan Edwards. Edwards was nearly invisible coming off his most prolific game of his career. He had one catch for 4 yards on four targets.

The Raiders lost three CBs to injuries with Trayvon Mullen (foot), Nate Hobbs (concussion) and Damon Arnette (groin) all leaving the game. TE Derek Carrier (pectoral) and RB Peyton Barber (toe) also got hurt. Gruden had no update on the severity of those injuries.