Officials: no Super Bowl threat amid rise of white supremacy 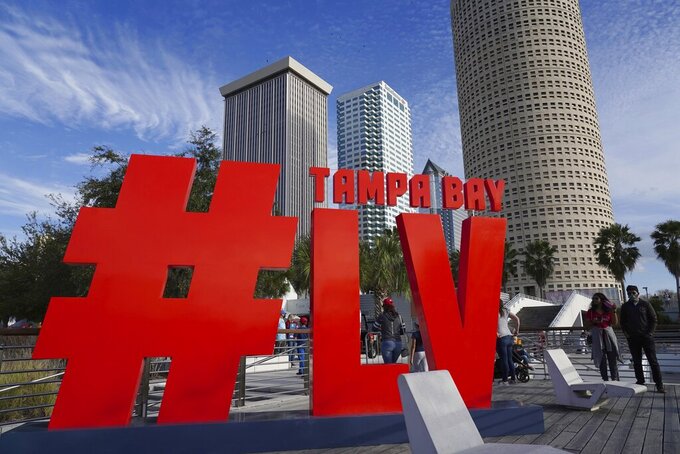 TAMPA, Fla. (AP) — There is no specific threat of an attack connected to the Super Bowl and related events despite concerns about the rise of white supremacist extremism, law enforcement officials said Wednesday.

The FBI has made several arrests in the Tampa area of people who allegedly took part in the Jan. 6 riot at the U.S. Capitol. But Michael McPherson, chief of the Tampa FBI office, said no links have been found indicating something similar might occur surrounding Sunday's game.

“We're constantly looking at threats that happen around the country,” McPherson said at a news conference. “There are no credible threats to the Super Bowl, or any related activity, at this moment.”

The NFL championship game at Tampa's Raymond James Stadium between the Kansas City Chiefs and Tampa Bay Buccaneers will be different than any other. It comes amid the coronavirus pandemic that will limit attendance and impose numerous health-related restrictions.

Still, law enforcement officials are treating the game as they always have — especially since the 9/11 terror attacks — with some 70 different agencies involved and hundreds of personnel on duty to guard against any kind of terrorist attack.

“The Super Bowl is an attractive target,” said David Pekoske, acting deputy secretary of the Homeland Security Department. “We can't take our eye off the ball.”

Because of the pandemic, the number of fans at the game will be about a third of the roughly 70,000-seat capacity of the stadium. There will be no tailgating, masks must be worn and the NFL is providing a safety kit containing masks and hand sanitizers to all fans entering the stadium.

As in the past, flight restrictions are being imposed around the stadium and its attendant events, including a ban on any use of drones. Civil fines up to $30,000 and possible criminal prosecution could await any violators.

“The Super Bowl is a no-drone zone. Leave your drones at home,” McPherson said.

The FBI chief added that social media is the preferred method for extremists — domestic or foreign — to plan and organize any kind of operation. Tips from people who see such communications are a key way law enforcement agencies can zero in and disrupt them, he said.

“Terrorists move at the speed of social media,” McPherson said. “Let us vet it out.”

Tampa Police Chief Brian Dugan said that over a year ago when planning for the game began in earnest no one foresaw the coronavirus pandemic coming — or that the hometown Buccaneers would be playing in the game.

“We're up to the challenge,” said Dugan, who recently recovered from COVID-19. “The goal is to find a fan-friendly experience that is safe and secure for everyone.”