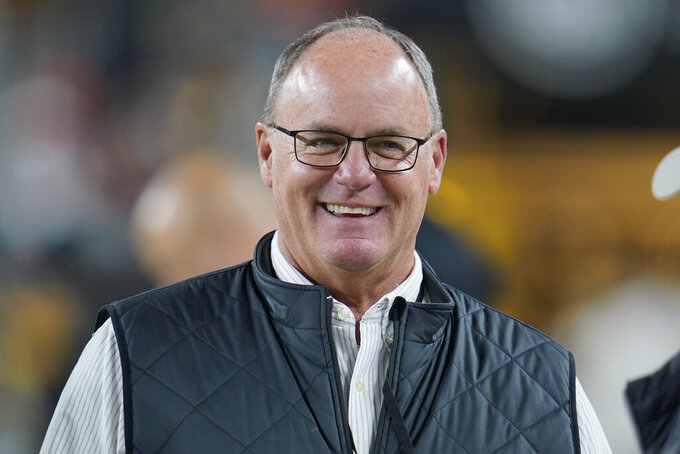 FILE - Pittsburgh Steelers general manager Kevin Colbert is shown before an NFL football game against the Chicago Bears, Monday, Nov. 8, 2021, in Pittsburgh. Colbert, who has spent more than two decades overseeing a roster that's made the Steelers perennial contenders, is stepping away after the NFL draft this spring. The 65-year-old Colbert has stuck to a “one season at a time approach” for a while. Team president Art Rooney II said Friday, Jan. 28, 2022, Colbert wants to move into a more advisory role. (AP Photo/Gene J. Puskar, File)

PITTSBURGH (AP) — Kevin Colbert is ready to get on with the next chapter of his life.

The longtime Pittsburgh Steelers general manager has one more massive item left to do before stepping down in May: find a replacement for Ben Roethlisberger.

While Colbert said Monday that longtime backup Mason Rudolph would be the starting quarterback if the season began next week, he anticipates adding some competition to the mix in the coming months through either the draft or free agency or perhaps a mix of both.

Colbert stressed the front office and coaching staff have “confidence” in Rudolph and are “excited to see what's next” and praised Dwayne Haskins, who “did some nice things” in practice and exhibition games during his first year with the club.

However Colbert acknowledged there will likely be one or two more players thrown into the mix by the time organized team activities begin in May.

The Steelers have the 20th overall pick in the draft following a 9-7-1 season that ended with a blowout loss to Kansas City in the opening round of the playoffs. While Colbert allowed the depth of this year's incoming quarterback class is thin by comparison, he believes there is quality at the top end, a group that includes former Pitt star Kenny Pickett.

Colbert and Steelers coach Mike Tomlin got a chance to monitor Pickett regularly during his five seasons with the Panthers — who share a practice facility with the Steelers — and took an up-close look at Pickett at the Senior Bowl. Colbert praised Pickett's progress, but pointed out the top end of the quarterback class provides a unique mix.

Pickett is more of a traditional pocket passer — though he can certainly make plays with his legs as evidenced by his 58-yard touchdown run in the ACC championship game against Wake Forest — while North Carolina's Sam Howell, Ole Miss' Matt Corral and Liberty's Malik Willis each bring a different dynamic to the position.

Flores, who is Black, filed a class-action lawsuit against the NFL and three teams earlier this month alleging racist hiring practices. Flores has no plans of dropping the litigation, though Colbert stressed Tomlin's decision to bring Flores on board was motivated specifically by what Flores can bring to the organization.

“When (Tomlin) brought Coach Flores' name up as a potential (candidate) I was excited about it because Coach Flores is a successful defensive coordinator and head coach.

"The thing that's really intriguing about Brian is he also started off in the personnel world. So I’m excited to get with him and see what kind of ideas he can bring us, both from a coaching viewpoint as well as a personnel viewpoint.”

The relationship between Colbert and Flores — and Colbert and the rest of the staff and front office — will change in May when he officially steps down following more than two decades with the organization, a run that's included two Super Bowl victories and a trip to another.

Colbert said he told Tomlin last spring that 2021 would be his final season on the job, but hopes to remain involved in a yet-to-be-determined advisory-type role. He is actually leading the search for his successor. Colbert and team president Art Rooney II have already interviewed at least a half-dozen candidates, including Steelers vice president Omar Khan and pro personnel coordinator Brandon Hunt.

The goal is to finish up what Colbert termed “preliminary interviews” by early March then move on to the next round after the draft.

“I think as we go through this, we understand there is a lot of capable people,” Colbert said.

There will be some critical decisions that will be made by the time Colbert's replacement is named. The team needs to decide whether to pick up inside linebacker Devin Bush's fifth-year option by early May.

Bush, whom the Steelers acquired after trading up to 10th in the 2019 draft, struggled in 2021 after returning from a torn ACL in his left knee. Colbert said while Bush can certainly play better he also anticipates Bush taking a step forward in 2022.

The status of defensive lineman Stephon Tuitt — who missed all of 2021 after undergoing knee surgery while also grappling with the death of his younger brother in a hit-and-run accident last summer — is uncertain.

“We’re very open to (continuing) to help him,” Colbert said. “We’ll continue to evaluate that position and his availability to us, and we just hope for the best for him as he tries to come back and be a part of the Pittsburgh Steelers.”