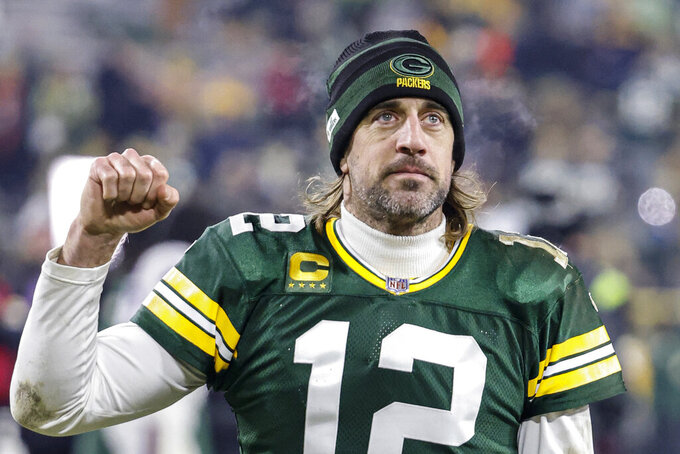 FILE - Green Bay Packers quarterback Aaron Rodgers (12) reacts as he leaves the field after an NFL game against the Minnesota Vikings on Sunday, Jan 2. 2022, in Green Bay, Wis. Aaron Rodgers is planning to come back to the Green Bay Packers for an 18th season, a move that keeps the reigning MVP off the trade market and answers the question that had dominated NFL offseason discussions.(AP Photo/Jeffrey Phelps, File)

The Packers announced the extension Tuesday. Terms weren’t released, but NFL Network reported Rodgers will make over $150 million over the next three years.

“We are very pleased to be able to come to an agreement with Aaron that keeps him in Green Bay,” Packers general manager Brian Gutekunst said in a statement. “His play on the field and leadership in our locker room remain vital in our pursuit of another Super Bowl title. The agreement also allows us to maintain and enhance what we feel is already a very competitive roster.”

Rodgers, 38, had announced a week ago on Twitter that he was returning to the Packers for an 18th season but said no deal had been signed at that point. Immediately after the season, Rodgers had said he was unsure whether he would return to the Packers, request a trade or retire.

The structure of the four-time MVP quarterback’s contract is designed to help the Packers’ salary-cap situation for now. According to NFL Network, Rodgers’ cap hit this year would be $28.5 million, $18 million lower than it would have been without this new deal.

Green Bay entered this week about $46 million over the cap. The Packers released outside linebacker Za’Darius Smith and offensive lineman Billy Turner and extended the contract of outside linebacker Preston Smith this week as they worked to get below the cap in time for the opening of free agency Thursday.

Now the Packers will try to work on reaching a long-term deal with All-Pro receiver Davante Adams, who received a franchise tag last week. If they don’t reach an agreement by July 15, Adams’ salary for the 2022 season would be just over $20 million.

Rodgers has spent his entire NFL career in Green Bay, but his future with the organization had been the subject of speculation ever since the Packers traded up four spots to take Utah State quarterback Jordan Love with the 26th overall pick in the 2020 draft.

Rodgers skipped the Packers’ organized team activities and mandatory minicamp last year in a standoff with team management. He reported to training camp on time but expressed his concerns with the organization and said he wanted to have a voice in the team’s decision-making process.

But he said on multiple occasions over the last few months that his relationship with team officials had improved significantly.

Rodgers has earned MVP honors each of the last two seasons and has helped the Packers win three straight NFC North titles. The Packers lost in the NFC divisional playoffs last season after reaching the NFC championship game in the 2019 and 2020 seasons.

The Packers haven’t reached the Super Bowl since Rodgers led them to a title in the 2010 season.