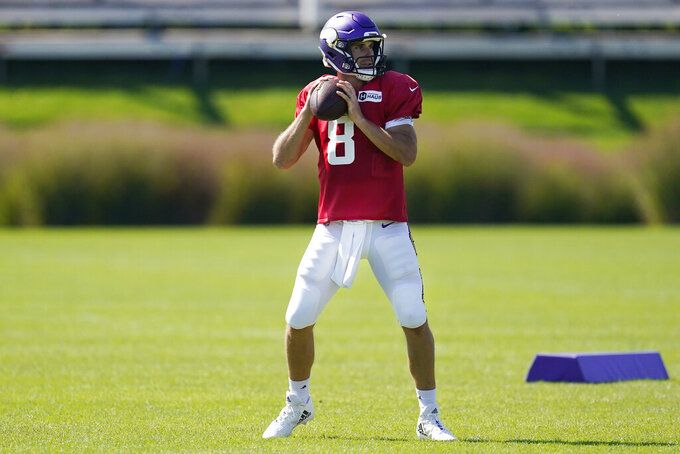 OPENING LINE: Packers by 1½, according to FanDuel SportsBook.

TURNOVER DIFFERENTIAL: Packers plus-13; Vikings plus-11.

PACKERS PLAYER TO WATCH: QB Aaron Rodgers, the two-time reigning NFL MVP, has tortured the Vikings with a combined 13 TD passes without an interception in the past four matchups between these teams. He'll be challenged to maintain that level of success without two-time All-Pro WR Davante Adams, who was traded to Las Vegas in the offseason.

VIKINGS PLAYER TO WATCH: WR Justin Jefferson has the most receiving yards (3,016) in NFL history through a player's first two seasons. He had 169 yards and two TDs in Minnesota's 34-31 win against Green Bay at home last year.

KEY MATCHUP: Packers OL vs. Vikings pass rush. Minnesota has fared best against Green Bay when Rodgers is consistently pressured. New Vikings OLB Za'Darius Smith, who had 26 sacks for the Packers over the 2019-20 seasons before being limited to one game because of a back injury in 2021, will be eager to stick it to his former team after being released this spring. Danielle Hunter and his 60½ sacks in 85 games mans the other OLB spot, creating a daunting assignment for Green Bay’s two best blockers David Bakhtiari and Elgton Jenkins. They were limited in training camp in their recovery from torn ACLs, but if cleared to play they'll likely be the starting tackles.

KEY INJURIES: Packers WR Allen Lazard (ankle) didn’t practice all week and was listed as doubtful to play. … Packers TE Robert Tonyan (knee) and S Darnell Savage (hamstring) were limited practice participants all week, but were expected to play. ... Vikings TE Irv Smith Jr. has recovered from a thumb injury that sidelined him for much of training camp. ... Vikings DT Jonathan Bullard (biceps), an expected starter, was listed as questionable, as was S Lewis Cine (knee).

STATS AND STUFF: The Packers are aiming for a fourth straight NFC North title. … The Packers have posted the NFC’s best regular-season record each of the past two years, though they haven’t reached the Super Bowl since their 2010 championship season. ... Green Bay’s Matt LaFleur is the only head coach in NFL history to win at least 13 games in each of his first three seasons. ... The Packers benched most of their starters for the three preseason games. They used the same strategy last year and lost 38-3 to New Orleans in the regular-season opener. ... The Packers have won 32 September games since 2008, the second-highest total in the league behind New England’s 33. … This marks the first game as a head coach for Minnesota's Kevin O'Connell. His predecessor Mike Zimmer lost his first home game against Green Bay 24-21 on Nov. 23, 2014. ... Cousins will start his fifth straight season opener for the Vikings, the most for the franchise since Daunte Culpepper took six straight from 2000-05. Fran Tarkenton has the record with seven (1972-78). The Vikings went 1-5 in September over the past two years.

FANTASY TIP: With Jefferson and Adam Thielen likely to draw most of the attention from the Packers secondary led by standout CBs Jaire Alexander and Eric Stokes, Vikings WR K.J. Osborn might find more space to produce. He had 290 yards and five TDs over the last six games last year.