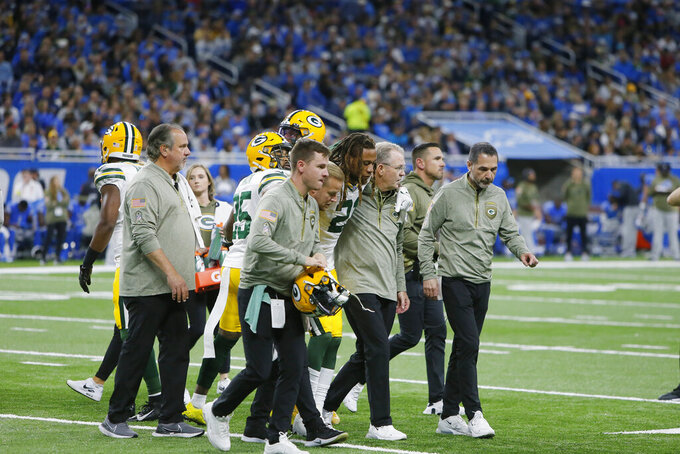 Green Bay Packers cornerback Eric Stokes (21) is helped off the field during the first half of an NFL football game against the Detroit Lions, Sunday, Nov. 6, 2022, in Detroit. (AP Photo/Duane Burleson)

“It’s looking unlikely, but I don’t have an exact update for that,” LaFleur said Friday.

Stokes, a 2021 first-round draft pick, hurt his ankle and knee in the loss at Detroit. Packers outside linebacker Rashan Gary, who has a team-high six sacks, suffered a season-ending knee injury in the same game.

“It is what it is,” Stokes said Wednesday. “That’s what I keep telling myself. Life happens. I know what I signed up for. So I know every chance I go out there, what I could be doing to myself.”

The Packers (3-6) released an injury report Friday that ruled out Stokes, linebacker De'Vondre Campbell (knee), wide receiver Romeo Doubs (ankle) and reserve cornerback Shemar Jean-Charles (ankle) for Sunday's home game with the Dallas Cowboys (6-2). This will be the second straight game that Campbell and Jean-Charles have missed.

Stokes had started each of the Packers’ nine games this season. He has started a total of 23 games since the Packers took him out of Georgia with the 29th overall selection in the 2021 draft.