Packers-Chiefs shaping up different than anyone expected 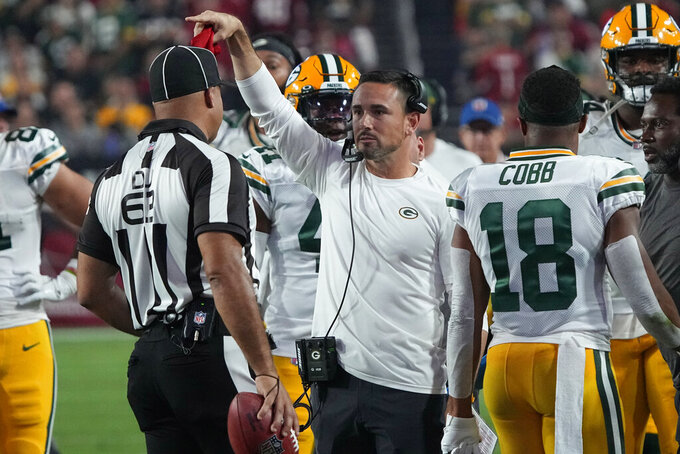 KANSAS CITY, Mo. (AP) — The Packers-Chiefs game Sunday was supposed to be a showdown between two teams with Super Bowl aspirations, each led by league MVPs under center and with rabid fanbases that expect nothing less than another deep postseason run.

Well, so much for expectations.

To start, the Packers will visit Arrowhead Stadium without the reigning MVP after Aaron Rodgers tested positive for COVID-19 this week. Instead of having a three-time All-Pro facing a downtrodden Chiefs defense, they'll turn to second-year pro Jordan Love in his first career start with all of seven regular-season passes to his name.

At least the Packers (7-1) have a record commensurate with expectations.

On the other side, the Chiefs (4-4) and the 2018 MVP have looked nothing like a championship contender. Patrick Mahomes leads the league in interceptions and turnovers, and Kansas City needed a fourth-quarter comeback Monday night just to beat the lowly Giants and even their record eight games into the season.

In other words, the luster that was supposed to accompany Sunday's showdown has dimmed considerably.

“Nobody's going to feel sorry for us,” Packers coach Matt LaFleur said. “They're not going to postpone or cancel the game. We have a game to play and it's a next-man up mentality and that's how we've operated for everybody.”

Indeed, the Packers managed to overcome the loss of wide receivers Davante Adams and Allen Lazard to COVID protocols — to say nothing of a bunch of injuries on defense — to deal the Cardinals their first loss of the season last week.

It gave them a comfortable 3 1/2-game cushion on the Vikings in the NFC Central.

“Definitely it’s time for some of the young leaders, myself included, to step up. And we’ve had a great leader to learn from,” said Packers running back Aaron Jones, who could be Love's best friend Sunday. “So now, take that and put it to use.”

Meanwhile, the Chiefs still believe they are Super Bowl contenders after adding pass rusher Melvin Ingram ahead of the trade deadline to help their moribund defense. But they are still a half-game behind the Chargers, whom they've already lost to once, and 1 1/2 games behind the Raiders in what has become a wide-open AFC West.

“We're still moving the ball and doing a lot of great things,” Mahomes said, “but whenever you turn the ball over or get a penalty and get pushed back, that kind of ruins drives. It comes down to execution in this league and if you don't execute, if teams are going to make you drive the entire field, you have to show you can do that.”

Too often this season, the Chiefs haven't been able to do it. They are minus-11 in turnover differential after coughing up the ball twice more against the Giants, and they committed 12 penalties for 103 yards in their game Monday night.

“It's nothing crazy, man. We just have to do our jobs,” Chiefs linebacker Willie Gay Jr. said. “We can't give up crazy deep balls. We can't jump offsides. It's just that is basic Football 101. You can't hurt yourself and we can't let them take the top off of the defense. Just do your job right and you'll be all right.”

The Packers kept the faith in Love, a 2020 first-round pick out of Utah State, even though he didn't play at all as a rookie and only sparingly in a season-opening blowout loss to New Orleans. Some of Love's rapid progress came when he got the vast majority of reps as Rodgers skipped voluntary workouts and a mandatory minicamp.

“He’s got his legs up under him. Just more experience,” Packers defensive tackle Kenny Clark said. “I’m not on the offensive side of the ball, but just watching him, you can just see he’s more comfortable.”

The two-time defending AFC champion Chiefs have an NFL-leading 19 turnovers through eight games, while the Packers entered this week tied with Indianapolis for the second-best turnover margin at plus-8.

“Whether it’s us getting interceptions, getting pressure on the quarterback, guys fumbling the ball — we could punch out the ball. There's a lot of stuff we're seeing on film,” Clark said. “That’s definitely something we’re going to put an emphasis on all week.”

There were plenty of Chiefs fans upset at their performance heading into last week's game, leading safety Tyrann Mathieu to label them “toxic" in a since-deleted tweet. Mathieu quickly apologized for it, saying he was merely frustrated at the way the season has been going, and he was given his usual adoring welcome during pregame introductions.

The Chiefs have been waiting weeks for Josh Gordon to pick up their robust offense enough to make an impact after the wide receiver signed early in the season. They are hopeful Ingram can make a more immediate impact — perhaps even this Sunday — given how much easier it is for defensive players to get up to speed.

“We'll see how it goes. We're not going to put him in a bad situation,” Chiefs coach Andy Reid said. “He just got here and got cracking (Wednesday), so we'll see how he feels and how comfortable he is.”