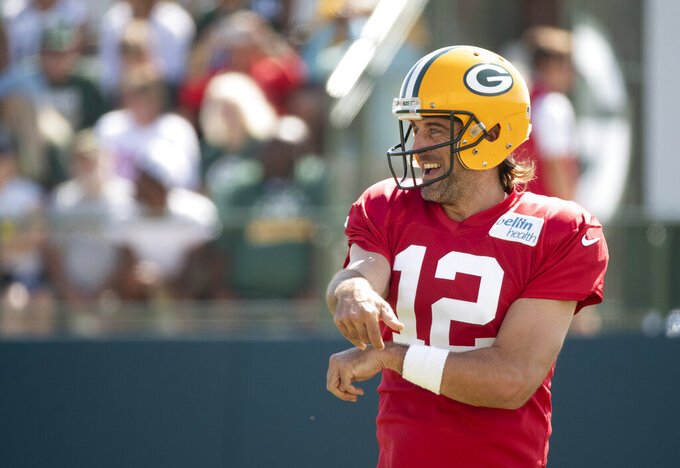 GREEN BAY, Wis. (AP) — Green Bay Packers quarterback Aaron Rodgers will try to earn his elusive second Super Bowl berth without many of the guys who helped him earn MVP honors each of the last two seasons.

All those changes will make it tough for the Packers to post the NFC’s best regular-season record for a third straight year. Rodgers looks forward to the challenge.

He’s helped by the return of Tom Clements, who is back as quarterbacks coach after filling the same role during the Packers’ 2010 championship season. That season remains Rodgers’ lone Super Bowl appearance.

“It’s adjustments every single year, but happy for those guys and where they’re at,” Rodgers said of the staff changes. “I definitely miss their friendship, but the guys who have taken those spots have done a really nice job.”

Replacing Adams could prove much tougher.

The Packers restocked their receiving corps by drafting Christian Watson in the second round, Romeo Doubs in the fourth and Samori Toure in the seventh.

When the young receivers were making mistakes in training camp, Rodgers and the veteran wideouts met with them to note what’s expected of them.

“This is the way that we do things here,” veteran wideout Randall Cobb said. “It’s either you deal with it or you get out of the room and we’ll find somebody else that’s going to get on board with what we’re trying to accomplish.”

The Packers also have concerns on the offensive line as David Bakhtiari and Elgton Jenkins return from knee injuries. Bakhtiari has appeared in only one game since tearing his left anterior cruciate ligament on Dec. 31, 2020.

If the Packers get the production they want at receiver and on the offensive line, they again should boast one of the NFC’s top teams.

“There’s enough talent in that room, no doubt about it,” general manager Brian Gutekunst said. “Not every team can probably say that, but this team can. But they’re going to have to come together and be a team.”

The Packers ranked ninth in total defense and tied for 13th in scoring defense last year but ought to fare even better this year.

“I’m loving every piece of the defense,” outside linebacker Rashan Gary said. “I’m loving how we’re jelling together and holding each other to that standard.”

Aaron Jones and A.J. Dillon should give Green Bay one of the league’s top running back tandems.

Rodgers believes both could catch 50 passes this season.

“Last year, we wanted to get the ball in 17’s hands in space anywhere,” Rodgers said in reference to Adams. “This year, 33 (Jones) and 28 (Dillon) are going to get a lot more opportunities.”

Jenkins and Bakhtiari were recently removed from the physically unable to perform list, raising hope they could be ready early in the season.

Jason Rebrovich was hired as outside linebackers coach once Mike Smith left to join the Minnesota Vikings’ staff. John Dunn was promoted from senior analyst to tight ends coach after Justin Outten departed to become Hackett’s offensive coordinator in Denver.