Packers' Jordan Love prepared to step in for absent Rodgers 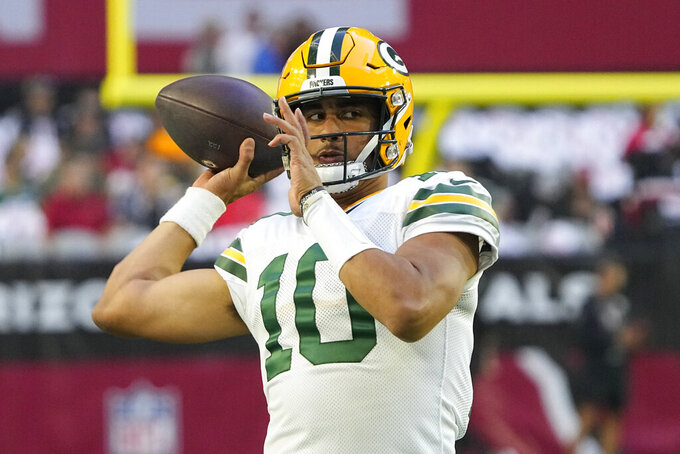 Green Bay Packers quarterback Jordan Love (10) warms up prior to an NFL football game against the Arizona Cardinals, Thursday, Oct. 28, 2021, in Glendale, Ariz. With reigning MVP Aaron Rodgers on the reserve/COVID-19 list and unavailable to play Sunday, Nov. 7, at Kansas City, the Green Bay Packers are about to discover just what they have in quarterback Jordan Love. The 2020 first-round pick from Utah State will make his first career start against the Chiefs.(AP Photo/Rick Scuteri)

GREEN BAY, Wis. (AP) — For the first eight weeks of the season, Jordan Love showed up to Lambeau Field on Wednesday mornings preparing to back up Aaron Rodgers.

It was the same this Wednesday, too. Then, at the team meeting that morning, coach Matt LaFleur revealed that Rodgers had tested positive for COVID-19 and would be out for this week’s game at Kansas City.

“I was a little shocked, but not crazy shocked just because with Kurt (Benkert, the practice-squad quarterback) testing positive earlier in the week, I kind of figured something might happen in the quarterback room,” Love said Friday. “My initial thought was wondering what would shake out with all the close contacts and how things would affect all of us in the room. That was my first thoughts. Then just trying to get my mind right starting this week. But I’ve prepared for this, so I’m confident in myself.”

The preparation, of course, has been different this week. As the No. 2 quarterback all season, Love’s job was to prepare as if he would start. During a typical week, that would include film study and mental reps on the practice field as Rodgers led the offense and Love guided the scout team. This week, it was Love running the show and coaches building the game plan around him.

The Packers’ first-round pick in 2020, Love spent his entire rookie season as the team’s No. 3 quarterback. This offseason, with Rodgers not reporting for offseason workouts, Love took the vast majority of reps during the four weeks of practices. That gave him a comfort level with the offense and the coaches a better understanding of which plays suit his skill set.

“Ever since there was (a) back and forth on whether or not 12 (Rodgers) would be here, I noticed that he took a step of just leadership,” All-Pro receiver Davante Adams said. “You can tell he was starting to gear to not just being a young guy learning, but trying to be more hands-on and learn from experience and start getting into the meat and potatoes of this offense. When you have an opportunity to be on the field, you definitely see a different look in his eye. So, I’ve been seeing that. He’s been communicating well this week and I’m looking forward to seeing what he does.”

Love enters this game having thrown seven passes in his career — all at the end of a blowout loss to the New Orleans Saints in Week 1.

“Physically, timing and rhythm are so hard for young quarterbacks,” quarterbacks coach Luke Getsy said. “He played in a pretty simplified system in college, where everything’s spread out and the plays aren’t very (complex); there’s only a few plays. So, then you come into this with the challenge of learning this big playbook, and now you have to match all this footwork to each route, to each pattern, to each concept. So, that takes time. And just these last six or seven weeks, I’ve been really proud of how far he’s come and to see the way that his feet are matching the timing of the throw and all that stuff. So, that part, the physical part of it, he’s come a long way.”

Love will be helped by the return of some key players. Adams, who missed last week’s win at Arizona while on the COVID-19 list, practiced Friday and will play Sunday. All-Pro left tackle David Bakhtiari, who spent the first eight games on the physically unable to perform list recovering from a torn ACL, could make his season debut. And big-play receiver Marquez Valdes-Scantling, who missed the past five games with an injured hamstring, was back at practice.

That means, other than tight end Robert Tonyan and rookie center Josh Myers, both of whom are out with knee injuries, Love could be surrounded by most of the team’s top players.

Love had a “great” week of practice, LaFleur said. Now, he’s just got to make it happen against the Chiefs, who are a disappointing 4-4 but still have 2018 MVP Patrick Mahomes at quarterback.

NOTES: CB Kevin King, who missed the last three games with a shoulder injury, was full participation at practice all week and was not given an injury designation. ... DT Kingsley Keke (concussion) is out and DT Dean Lowry (hamstring) is questionable. ... Asked about Rodgers not being vaccinated, Adams said: “Grown man. It’s bigger than football, man. It’s people’s lives that they’ve got to figure out what they’re comfortable with.”