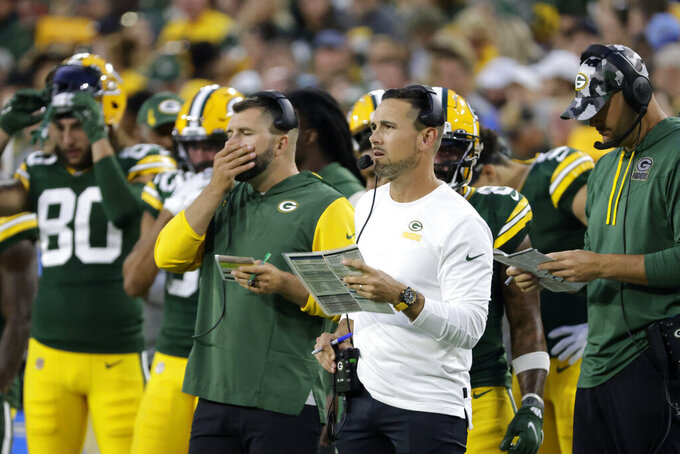 GREEN BAY, Wis. (AP) — MVP quarterback Aaron Rodgers and most of Green Bay’s other starters will open the season without having played in any of the Packers’ three exhibition games.

Packers coach Matt LaFleur said Tuesday that Rodgers and the other Packers who hadn’t played in the first two exhibition games also will be held out of Green Bay’s preseason finale Thursday at Kansas City.

The Packers want to make sure they kept their key players healthy for the Sept. 11 regular-season opener at Minnesota. Most of the regulars got plenty of reps last week when the Packers held two days of joint practices with the New Orleans Saints.

“Just the risk vs. reward, knowing it’s a long season, having 17 games,” LaFleur said. “I think early in we get stressed with travel in the season, as well. … You factor in everything.”

The Packers are away from Lambeau Field for six of their first nine games, including an Oct. 9 date with the New York Giants in London that technically counts as a home game.

According to the Packers’ unofficial depth chart, the only first-teamers on offense and defense to play in the first two preseason games are rookie linebacker Quay Walker and offensive linemen Yosh Nijman, Jon Runyan Jr., Josh Myers, Jake Hanson and Royce Newman.

Green Bay’s starting offensive line for the season opener is in flux because its two best linemen — David Bakhtiari and Elgton Jenkins — are recovering from knee injuries. Both have been activated from the physically unable to perform list, but their availability for the season opener remains uncertain.

This marks the second straight year that the Packers haven’t used most of their starters for any of their preseason games. The strategy might have produced short-term consequences last year when the Packers opened the regular season with a 38-3 loss to the Saints, though they went on to finish 13-4 and won a third straight NFC North title.

“I think there are a lot of lessons that you take from those experiences that hopefully having gone through that will help us avoid maybe a similar situation,” LaFleur said. “But I look at our team and I think we’re at a much different place than we were a year ago, especially on the defensive side of the ball, with the continuity that we have there. And offensively, like I said, hopefully we’ll have learned from our past mistakes.”

NOTES: The Packers placed RB Kylin Hill on the reserve/physically unable to perform list and released WR Danny Davis and S Vernon Scott. Hill suffered a season-ending knee injury last October and is still working his way back. Scott, a 2020 seventh-round draft pick, played 18 regular-season games and one playoff game over the past two years. Davis is a rookie undrafted free agent from Wisconsin.