Packers stagger back home after surprising loss to Giants 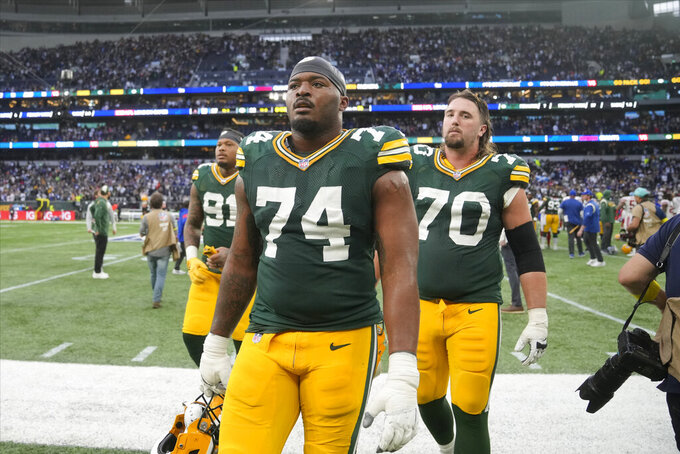 The offense can’t put together a complete performance. The defense isn’t living up to its preseason expectations.

Green Bay’s output through the first five weeks of the season raises doubts about the Packers’ chances of winning a fourth straight NFC North title and seriously challenging for a Super Bowl berth.

The Packers (3-2) returned home from London after squandering an early 17-3 lead in a 27-22 loss to a New York Giants team that was missing wide receivers Kadarius Toney and Kenny Golladay and had quarterback Daniel Jones playing through an ankle injury.

“We’ve got to be better, bottom line,” Packers coach Matt LaFleur said Monday. “We have to be better at responding to adversity when it strikes because it’s inevitable. It’s going to happen in every game. Obviously, yesterday we did not respond well to the adversity.”

The Packers’ surprising loss came one week after they needed Mason Crosby's field goal as time expired in overtime to outlast a New England Patriots team that had rookie quarterback Bailey Zappe making his NFL debut because of injuries to Mac Jones and Brian Hoyer.

The offense has been consistent in its inconsistency.

Green Bay’s only second-half points Sunday came when the Giants intentionally took a safety in the closing seconds. They also went scoreless in the second half of a win at Tampa Bay and scored only three points after halftime in a victory over Chicago. They went scoreless in the first half of a loss at Minnesota and scored just three first-half points against New England.

“We’re a little bit of a roller-coaster team at times,” quarterback Aaron Rodgers said after Sunday’s game. “Our best teams have been a little bit more steady. We’ve got to find that rhythm, that steadiness.”

The defense also has struggled lately after dominating the offense for much of training camp.

Even with Jones playing hurt and missing some notable receivers, the Giants scored on five straight possessions against the Packers. LaFleur was asked Monday if defensive coordinator Joe Barry needed to do more considering how much talent Green Bay has on defense.

Green Bay doesn’t have much time to correct things before hosting the New York Jets (3-2) on Sunday.

The Packers requested to have their off week later in the season rather than immediately after their international game.

LaFleur said he would alter the team’s usual schedule to make sure the Packers are ready to play so soon after returning from a trip overseas.

“Our guys have got to get not only their bodies back but their minds right to play,” LaFleur said. “We’ll adjust accordingly and we’ll get a better feel for our guys come in on Wednesday, but I would assume Wednesday is going to be a little bit more of a mental day, and then we’ll try to get back more to a normal schedule on Thursday or Friday.”

It’s worth noting the Minnesota Vikings and New Orleans Saint s won Sunday a week after they faced off in London.

The Packers ran the ball pretty effectively, with Aaron Jones and A.J. Dillon combining for 97 yards on 19 carries. They didn’t get the ball enough as the Giants staged their comeback. The Packers finished with 39 pass attempts and 20 rushes. LaFleur said Monday: “I’ve got to do a better job of making sure that we’re getting those guys the necessary touches.” ... Mason Crosby connected from 46 and 48 yards out and is 6 of 6 on field-goal attempts to bounce back from his disappointing 2021 season.

The Packers didn’t throw downfield effectively, which proved particularly costly in the fourth quarter when they went three-and-out in a tie game by throwing three straight incompletions. ... The defense failed to produce a takeaway and has forced only one turnover in its last two games.

CB Rasul Douglas was penalized three times. ... S Darnell Savage missed an open-field tackle that helped Saquon Barkley turn a short completion into a 41-yard gain on the touchdown drive that put the Giants ahead for good.

WR Christian Watson left with a hamstring injury in the second half.

The Packers host the Jets, who have won two straight and are coming off a 40-17 victory over the Miami Dolphins. The Jets’ offensive coordinator is Mike LaFleur, the younger brother of Matt LaFleur.