Panthers bench Mayfield; Darnold to start at QB vs Broncos 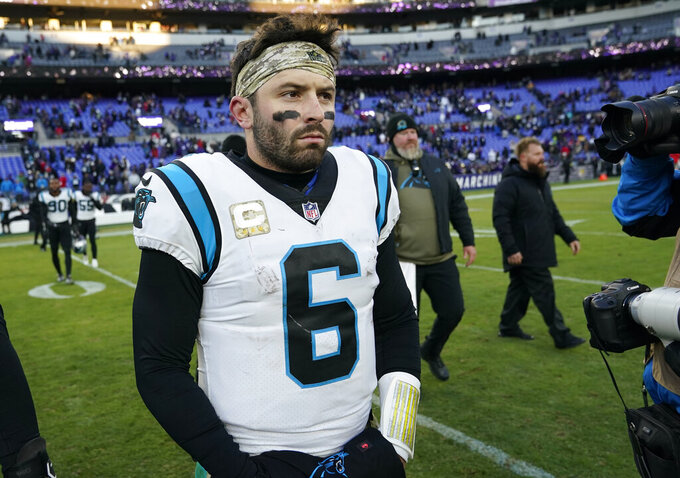 Carolina Panthers quarterback Baker Mayfield (6) walks off the field after his teams loss to the Baltimore Ravens after an NFL football game Sunday, Nov. 20, 2022, in Baltimore. (AP Photo/Patrick Semansky)

The team announced Tuesday that Darnold will make his season debut on Sunday against the Denver Broncos after interim head coach Steve Wilks decided to bench Baker Mayfield following yet another rocky performance in a 13-3 loss to the Baltimore Ravens this past weekend. Darnold has spent the majority of the season on injured reserve with a high ankle sprain he suffered during the preseason.

Darnold becomes the fourth different quarterback to play for the Panthers (3-8) this season — and the third different starter, joining Mayfield and the injured P.J. Walker.

Darnold went 4-7 as Carolina’s starter last season, falling apart after getting the Panthers off to a 3-0 start under former head coach Matt Rhule. He finished the year completing 59.9% of his passes with nine touchdowns and 13 interceptions for a 71.9 passer rating.

Mayfield has struggled since being acquired in a trade in July from the Cleveland Browns, going 1-5 as Carolina’s starter.

The 2018 No. 1 overall NFL draft pick has completed 57.8% of his passes with six touchdowns and six interceptions for a 74.4 QB rating. He struggled to get anything going on offense this past week against Baltimore, throwing two interceptions in the fourth quarter as the Panthers fell to 0-5 on the road.

Mayfield will backup Darnold this week, according to the Panthers.

Mayfield returned to the starting lineup last week after Walker injured his ankle in Week 10.