Panthers could turn to offensive, defensive line in draft 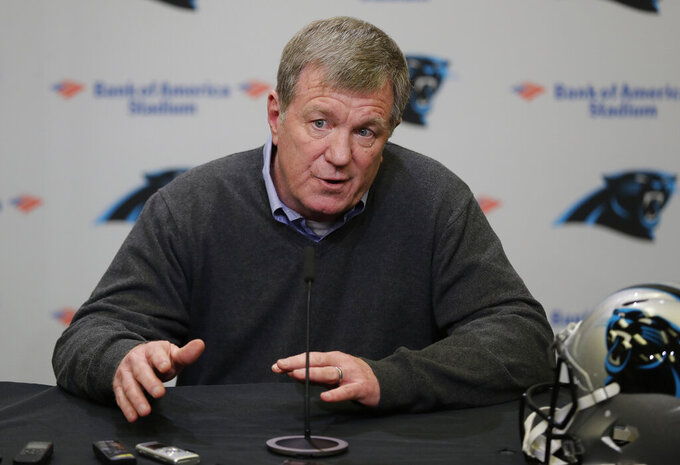 CHARLOTTE, N.C. (AP) — After focusing on upgrading the team's overall speed the past few NFL drafts, don't be surprised if the Carolina Panthers look to add bulk up front this year.

The Panthers have needs at left tackle and defensive end following the retirement of Julius Peppers and the release of Matt Kalil. Carolina struggled to protect quarterback Cam Newton last season while the pass rush fell off — two major reasons Carolina finished 7-9.

Panthers general manager Marty Hurney predictably didn't offer many clues to the team's upcoming draft plans, but said he likes what he sees from both positions in this year's class.

"It's a strong group up top and it's a deep group," Hurney said of the defensive linemen available.

Hurney also predicted there will be a handful of offensive linemen who'll be selected in the first round, and said that the group is strong overall.

After Kalil was placed on injured reserve with a knee injury last summer, Carolina brought in journeyman Chris Clark to play left tackle before turning to Marshall Newhouse later in the season. The Panthers re-signed right tackle Daryl Williams this offseason, a move that could potentially mean Taylor Moton will shift to left tackle.

But if someone such as Washington State's Andre Dillard or Florida's Jawaan Taylor falls to No. 16, the Panthers may head in that direction. Carolina hasn't drafted an offensive tackle in the first round since Jeff Otah in 2008.

On the other side of the ball, the Panthers signed veteran pass rusher Bruce Irvin to a one-year deal, but he's not viewed as the long-term answer opposite Mario Addison. Clemson's Clelin Ferrell, Michigan's Rashan Gary and Florida State's Brian Burns are potential options with the 16th pick that could help fill the void left by Peppers' departure.

"It's a good class of edge rushers," coach Ron Rivera said. "We feel really good about the guys we have seen."

Some things to watch for the Panthers in the NFL draft:

Hurney sounded optimistic about Newton's recovery, saying the 2015 league MVP is gaining more range of motion in his surgically repaired right shoulder. However, Newton hasn't thrown a football yet.

Newton has two years left on his contract, and it's possible the team could start looking for a long-term replacement.

"Our philosophy is you have to develop young quarterbacks," Hurney said.

One potential option outside of the first round is West Virginia's Will Grier, who grew up in Huntersville, North Carolina, — about 20 miles north of where the Panthers play their home games. The Panthers have met extensively with Grier this offseason.

Rashaan Gaulden, a third-round pick in 2018, and Da'Norris Searcy are potential replacements, but if the Panthers can find a safety with a knack for causing turnovers in the second or third rounds there is a real chance they could fill that need.

Greg Olsen has been a magnificent player for the Panthers, but the three-time 1,000-yard receiver has struggled to stay on the field the past two seasons because of foot injuries. All signs are Olsen will be back for another season, but at some point the team will need to look to replace the 34-year-old tight end.

Carolina drafted Ian Thomas last year with the 101st overall pick and the jury is still out on whether he can develop into Olsen's heir apparent. But don't rule out the team grabbing another tight end at some point during the draft.

No running back in the NFL was on the field more last season than Christian McCaffrey. And while Rivera still believes McCaffrey has a chance to reach 1,000 yards rushing and 1,000 yards receiving in a season, he'd like to lessen his role just a little bit.

The Panthers have Cameron Artis-Payne coming off the bench, but a back with a similar skillset to McCaffrey — fast, shifty and multi-talented — would be ideal.

This will be new owner David Tepper's first NFL draft since purchasing the Panthers for $2.2 billion last summer, and he's been heavily involved in the team's draft process.

"He's very excited and Ron and I communicate with him every day," Hurney said. "He's looking forward to being in the draft room. He's dropped in on our meetings with scouts and has a good feel" for the draft.