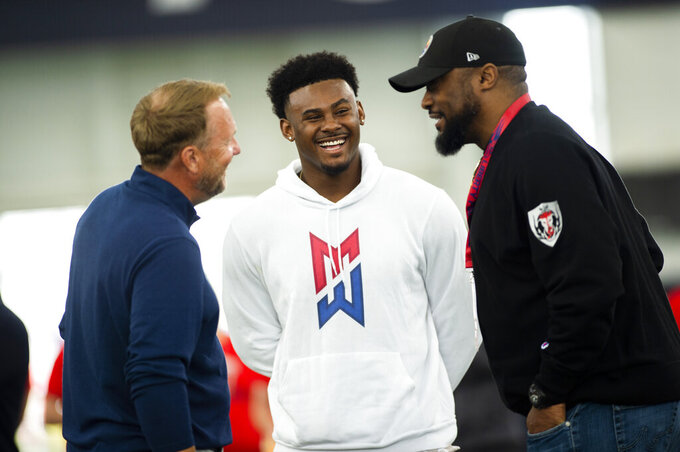 FILE - Malik Willis, center, talks with Liberty head coach Hugh Freeze, left, and Pittsburgh Steelers head coach Mike Tomlin during Liberty football Pro Day in Lynchburg, Va., Tuesday, March 22, 2022. Carolina is likely to have its choice of the top three quarterbacks in the draft at No. 6 — Liberty’s Malik Willis, Pittsburgh’s Kenny Pickett and Mississippi’s Matt Corral — but there is plenty of debate as to whether any of them are worthy of being top 10 picks. (AP Photo/Kendall Warner)

LAST SEASON: The Panthers suffered through another five-win season under Matt Rhule, leaving the third-year coach squarely on the hot seat. A major problem has been Carolina's inability to land a franchise quarterback. After moving on from Teddy Bridgewater following the 2021 season, the Panthers sent three draft picks to the New York Jets for Sam Darnold. But Darnold has disappointed in Carolina. Cam Newton was brought back midseason, but went 0-5 as the starter as past shoulder issues continued to limit his ability as a passer. Carolina went all in this offseason trying to land Deshaun Watson, but came up short. Darnold and P.J. Walker are currently the only QBs on Carolina's roster. Baker Mayfield and Jimmy Garoppolo remain options at quarterback if the Panthers decide against taking Liberty’s Malik Willis or Pittsburgh’s Kenny Pickett with the No. 6 pick. Trading out of the sixth spot and adding draft picks remains an option, too.

OUTLOOK: GM Scott Fitterer knows his team has two glaring holes to fill: quarterback and left tackle. The team also could use an edge rusher to replace Haason Reddick, who left via free agency after recording 11 sacks last year. Finding a quarterback is the first priority though given it is the most important position in sports. Left tackle is a close second. The Panthers added Corbett and Bozeman to shore up the interior line, but a blindside protector remains a need. The Panthers have not used a first-round draft pick on an offensive tackle since Jeff Otah in 2008. They don't have picks in the second or third rounds, making it tough to fill multiple needs.