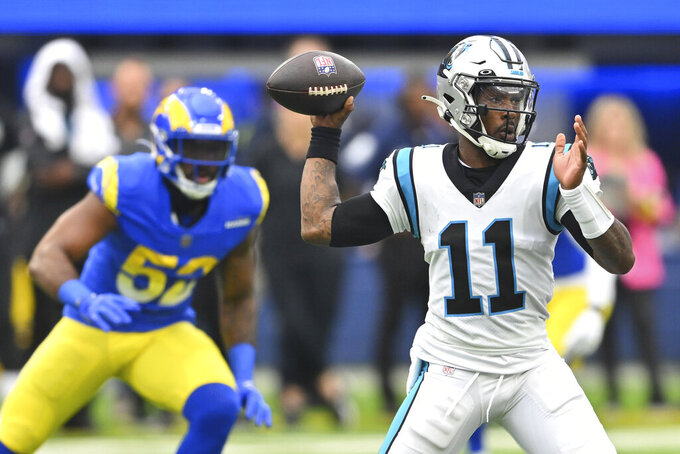 CHARLOTTE, N.C. (AP) — Things are such a mess with the Carolina Panthers' quarterback situation that interim coach Steve Wilks isn’t even sure who’ll be healthy enough to start Sunday against Tampa Bay.

Baker Mayfield and Sam Darnold are dealing with sprained ankles, while P.J. Walker has a neck injury. Jacob Eason is the only healthy QB on the roster for Carolina (1-5), but he was just elevated from the practice squad last week and has limited NFL experience.

“I think they are all considered to be in the mix, especially with the injuries that we have,” Wilks said.

Wilks is hopeful Darnold, who has missed the first six games because of a preseason high ankle sprain, might be designated to return from injured reserve on Wednesday.

Even if Darnold does practice this week, Wilks isn't sure if he'd be ready to start right away.

“It’s hard to say from the standpoint I haven’t seen him," Wilks said of Darnold. “I have a lot of confidence in him as a player, but by being off for so long you don’t know exactly how he is going to return.”

If Darnold isn't ready to go, the Panthers could go with Walker — who struggled in Sunday's 24-10 loss to the Los Angeles Rams — or Eason, who relieved him in the fourth quarter after the neck injury.

“Right now, we don't know anything until we get the injury report on Wednesday,” Wilks said.

The Panthers listed him as doubtful last Friday after Wilks said he had a “great workout” with trainers. But a follow up MRI showed the QB has more ligament damage than originally thought and he was ruled out before Sunday's game.

Wilks gave no reassurances on Monday that Mayfield, the No. 1 pick in the 2018 draft by the Cleveland Browns, would be the starter once he's healthy.

The Panthers are last in the league in offense.

Christian McCaffrey. Despite playing in the NFL's worst offense, McCaffrey continued to shine against the Rams with 158 yards from scrimmage on 20 touches. McCaffrey accounted for 74.5% of the team's yards from scrimmage against the Rams. It's the second-highest percentage by a player in a game over the last 20 seasons, according to ESPN. The 2019 All-Pro continues to be the one bright spot on an otherwise dreadful unit.

Third-down offense. Carolina's offense is historically bad on third downs, converting a meager 23.6% of their opportunities. The Panthers have the ball less than 25 minutes per game on average — by far the lowest in the NFL.

“It has been our nemesis and we are working to correct it,” Wilks said of the third down issues.

CB Donte Jackson. He had a Pick-6 for Carolina's third defensive touchdown of the season on Sunday before having to leave with an ankle injury.

Robbie Anderson. The Panthers traded the disgruntled wide receiver to the Arizona Cardinals on Monday after a sideline argument with assistant coach Joe Dailey prompted Wilks to kick him out of the game. Wilks seemed confident the Anderson move wouldn't trigger a fire sale for the Panthers, something that would almost certainly compromise any chance of having his interim tagged removed after the season.

When asked if he has been given assurances by owner David Tepper or general manager Scott Fitterer that more trades aren't coming, Wilks replied: “I will say this, the conversations are very fluent between us and we are all on the same page as far as trying to talk and create clarity. And right now we are very pleased with the guys we have.”

Laviska Shenault, Shi Smith and Terrace Marshall all have a chance for more playing time with Anderson gone.

204 — Number of yards receiving through six games for D.J. Moore after the team signed him to a three-year, $61.8 million contract extension this past offseason.

Things won't get any easier for Carolina's depleted secondary as an irritated Tom Brady comes to town following an unexpected loss to the Pittsburgh Steelers on Sunday. Brady normally tends to step up his game after a loss.