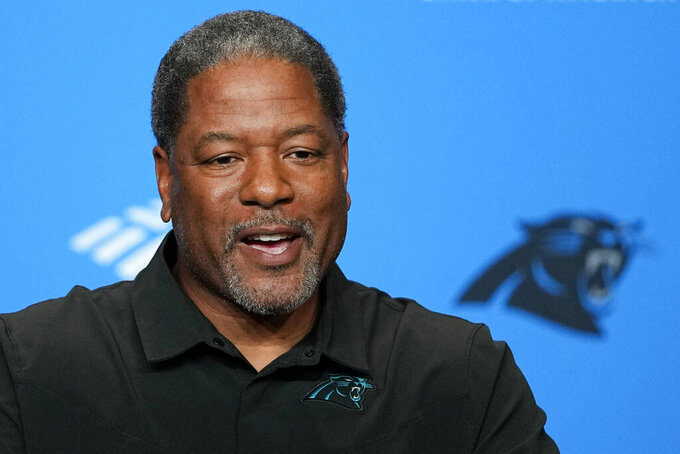 But that didn’t prevent the confident Wilks from jumping at the opportunity to take over as Panthers interim head coach after Matt Rhule was abruptly fired Monday — even though he realizes the odds of being promoted to a permanent position next season aren’t great.

“I didn’t blink whatsoever,” Wilks said Tuesday. “I’m not worried about the end result. I’m just worried about winning the day and giving us the opportunity to be successful.”

Since 2000, 40 NFL coaches have held the interim tag after the head coach was fired or left the team midseason. Of those, only 10 have gone on to earn a full-time head coaching job the following season.

The most recent to do it was Jacksonville’s Doug Marrone in 2016.

Jason Garrett lasted the longest of any interim hire, going 80-64 in nine seasons with Dallas after replacing Wade Phillips in 2010, making the playoffs three times with the Cowboys.

It has been even more difficult for Black coaches such as Wilks.

Since 1990, 14 Black coaches have been hired on an interim basis and only three have gone on to be promoted to full-time basis — Romeo Crennel in Kansas City, Leslie Frazier in Minnesota and Mike Singletary in San Francisco — according to the Washington Post.

The reason interim coaches tend to struggle, of course, is they're typically inheriting a bad situation — just as Wilks is in Carolina, taking over a Panthers (1-4) team that has lost 11 of its past 12 games and hasn't made the postseason since 2017.

But Wilks is optimistic that 12 games — including five remaining in the division — is enough time to turn things around.

“I know what it takes. I’ve been around here when it was good,” said Wilks, who served as a Panthers defensive assistant coach from 2012-17. “We went to a Super Bowl. So to be able to get us back to that point is the reason I wanted to accept and take this job.”

Panthers owner David Tepper made it clear on Monday that he's given Wilks “no promises” when it comes to having his interim status lifted.

In fact, Tepper seemingly set the bar high by saying Wilks will be considered for the full-time job next season “if he does an incredible job."

Wilks' primary focus right now is on digging the Panthers out of a hole — and restoring some interest from an otherwise disgruntled fanbase.

It won't be easy.

Carolina enters Sunday's game against the Los Angeles Rams with the league's 32nd-ranked offense and its passing game has been dismal.

The Panthers are down to third-string quarterback P.J. Walker with Baker Mayfield expected to miss multiple weeks with a high ankle sprain and Sam Darnold still on injured reserve.

Wilks said the team’s schemes won’t change much, but added that coaches will “need to be creative.”

Wilks said his goal is to stop the run and make opposing teams more one-dimensional, while creating some momentum and consistency on offense, which he said starts with the run game.

And he's challenged his players to step up.

He hinted that changes to the starting lineup could be forthcoming and made it clear everyone will have a chance to compete for playing time — even those on the practice squad.

“We’re sitting at a point to where right now if you do the same thing over and over again, you know the definition — that’s insanity,” Wilks said.

This is Wilks' second stint leading an NFL team.

He was hired as the Arizona Cardinals head coach in 2018, but lasted only one season after finishing 3-13.

Earlier this year, he joined Brian Flores’ lawsuit, alleging racist hiring practices by the NFL when there are vacancies for coaches and general managers.

Wilks didn't want to discuss his experience in Arizona, saying his focus is on the present.

He’s known as a stern but fair coach and is well respected by his players.

“I’m genuine in my approach. I’m sincere,” Wilks said. “I’m gonna tell you the truth, whether you like it or not. And I think when you have that kind of approach, players and people appreciate that.”

Whether or not that leads to more wins — and a full-time job — remains to be seen.