Panthers next GM will have decision to make at quarterback 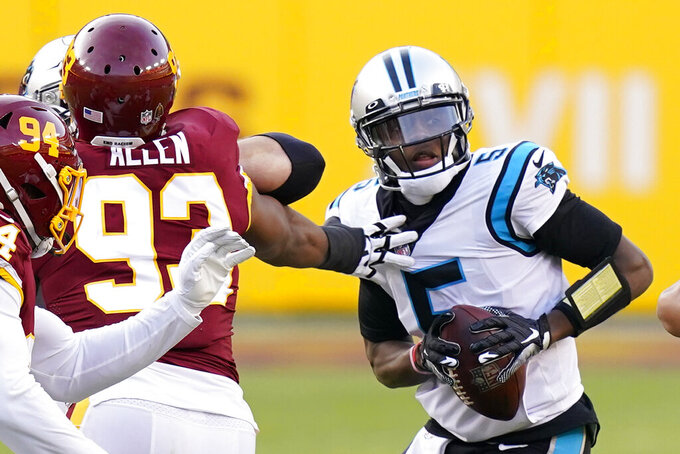 CHARLOTTE, N.C. (AP) — The Panthers' next general manager’s first order of business will be deciding what to do at quarterback.

Teddy Bridgewater’s dud of a season ended with the journeyman QB getting benched in the second half of a 33-7 loss to the New Orleans Saints on Sunday after he threw two interceptions in the end zone. Bridgewater went 4-11 as a starter and struggled to lead winning drives late in games.

The Panthers are in the midst of finding a replacement for longtime GM Marty Hurney, who was fired last month.

They've requested permission to talk to Patriots director of player personnel Nick Caserio, Bills assistant general manager Joe Schoen, and Browns vide president of player personnel Kwesi Adofo-Mensah for the vacant GM job, a person familiar with the situation told The Associated Press. The team is also expected to interview former Giants general manager Jerry Reese. The person spoke to the AP on Monday on condition of anonymity because the team has not made its search public.

Along with Bridgewater, the Panthers have P.J. Walker and 2019 third-round draft pick Will Grier at quarterback. Carolina owns the eighth pick in the NFL draft, which means Ohio State's Justin Fields or BYU's Zach Wilson could come into play.

There isn't much available in the way of franchise quarterbacks in free agency unless the Cowboys decide not to re-sign Dak Prescott.

Panthers coach Matt Rhule was noncommittal on Bridgewater being the starter next season.

Bridgewater signed a three-year, $63 million contract last season and it wouldn't make any sense to cut him because the Panthers would have to absorb a $20 million hit under the salary cap.

Bridgewater said he knows he has to improve this offseason if he wants to keep his starting job.

“In this business, everything is production based,” Bridgewater said. “And of course, I have to be better, my production has to be better. For the most part, we did a good job of keeping ourselves in the games. ... You want to be better in the red zone."

The toughest free agency decision for the Panthers might be whether to re-sign offensive tackle Taylor Moton or wide receiver Curtis Samuel. They're expected to command big money contracts as unrestricted free agents, which will make it difficult for Carolina to keep both.

Given the Panthers already have two 1,000-yard receivers in D.J. Moore and Robby Anderson under contract, and that topnotch offensive tackles are harder to find, logic suggests they'd lean toward keeping Moton, who has started all 48 games over the past three seasons.

But losing Samuel would be tough given he had a breakout season in Joe Brady's offense with 77 receptions for 851 yards and three touchdowns, while rushing 41 times for 200 yards and two TDs.

When asked if he sees any way the Panthers can re-sign both players, Rhule replied, “It will depend on money, the market and the (salary) cap. They are guys anyone would want but it will come down to financial considerations.”

The Panthers gave running back Christian McCaffrey a four-year, $64 million contract extension this past offseason, but the 2019 All-Pro only played three games because of injuries to his ankle, shoulder and quadriceps.

“It was a tough season for me because I couldn’t get healthy,” McCaffrey said. “It was one thing after another.”

The good news is McCaffrey said he won't need surgery on any of his injuries. However, he plans to re-evaluate his training regimen.

“Sometimes that means resting and not going out and training because I can be my own worst enemy sometimes,” McCaffrey said.

Another tough decision will be whether to bring back athletic defensive tackle Kawann Short, who has missed 27 games over the past two seasons with separate shoulder injuries that required surgery. Short said he is 12 weeks into an eight-month rehab process, but feels like he will be ready for OTAs in the spring.

However, Short isn't sure if the team will bring him back, saying “that is a discussion we will have in the next couple of weeks. It's a business.”

Short is due to cost $20 million under the NFL salary cap, but the team could free up $9.8 million if it cuts him before June 1.

Rhule struggled in his first year at Temple and Baylor, only to turn both of those programs around in Year 2. Wide receiver Robby Anderson, who played for Rhule at Temple, said if Rhule were a stock he would buy it up.

“You’re confident if you put your money into it, because you know the trend," Anderson said.