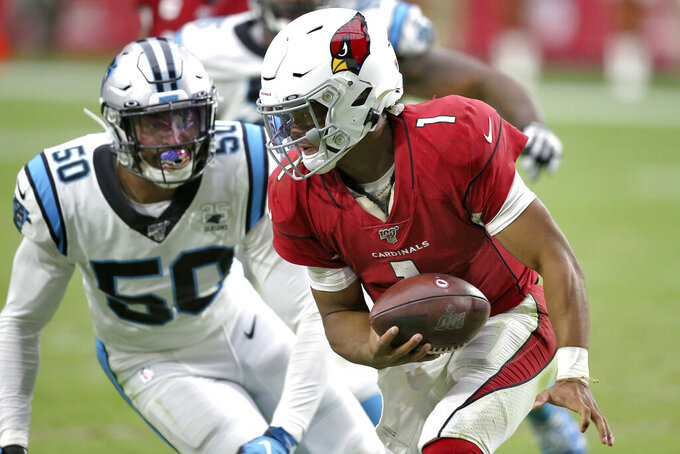 CHARLOTTE, N.C. (AP) — The Panthers are finally figuring out how to get pressure on opposing quarterbacks.

Now coach Ron Rivera hopes his defense can do it on a consistent basis beginning Sunday when the Panthers visit Deshaun Watson and the Houston Texans (2-1).

After finishing 27th in the NFL in sacks last season, the Panthers cut ties with several veteran defensive players and Rivera went back to the drawing board installing several new looks — including utilizing a three-man front — designed to help the unit become less predictable and create more pressure.

So far it's working. The Panthers are fourth in the NFL in overall defense and second with 12 sacks through three games, eight of those coming in a dominating 38-20 victory over the Arizona Cardinals this past Sunday. Carolina has 11 sacks in its last two games.

"It's a good combination of what's going on," said Rivera, the team's defensive play caller. "We have guys who can rush from the edges with a tremendous amount of speed and quickness and we have (interior linemen) getting a good inside push."

Of Carolina's eight sacks last week of rookie QB Kyler Murray, six came from outside linebackers: three from veteran Mario Addison, two from Christian Miller and one from rookie Brian Burns. But many of those were set up by an inside push, where players like Gerald McCoy and Kyle Love routinely flushed Murray out of the pocket laterally and into the awaiting arms of teammates.

Texans coach Bill O'Brien expressed concern about the challenge ahead.

"They're not a defense that is going to be out of position," O'Brien said. "You're going to have to execute at a high level to move the ball on them, to put the ball in the endzone. They're going to be very, very fundamentally sound, and very good at what they do."

The Panthers (1-2) are far from a finished product on defense, but a unit that parted ways with veteran leaders like Julius Peppers, Thomas Davis, Captain Munnerlyn and Mike Adams appears to be settling in and becoming more comfortable with each other with each passing week.

"From game one until now, we've gotten a whole lot better," said Burns, a first-round pick from Florida State who was brought in to bolster the pass rush.

Added Panthers linebacker Shaq Thompson: "Everybody is just now starting to trust each other. Guys aren't trying to do too much. Everybody is doing their jobs and winning their one-on-one battles."

That will be a key against Watson, another mobile quarterback who knows a thing or two about keeping plays alive with his feet.

Watson displayed that last Sunday against the Chargers when he turned a sure sack into a 53-yard touchdown by shaking off one pass rusher, stepping up in the pocket to draw linebackers toward him before dumping off a short a soft touch pass over the top of the defense to a wide open tight end Jordan Akins, who caught the ball and turned to find nothing but open space in front of him.

"You have to stay discipline on some of these quarterbacks," Rivera said. "Last week (against Murray) was a good example and this week (with Watson) is an even better example. Deshaun is definitely a threat not just to run, but to throw the ball down the field because his eyes are always down the field."

Watson could prove more difficult to contain given his experience in reading defenses and overall size.

He has completed 66% of his passes for 778 yards with six touchdowns and one interception this season. He's also run for 63 yards and two scores.

"He works the pocket and knows how to extend plays with his legs and athleticism," Burns said. "But is we stay disciplined we should have the opportunity to get a lot of hits on him."