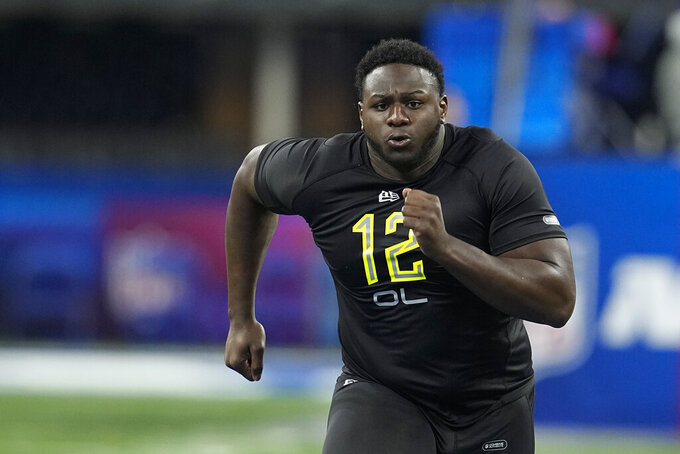 CHARLOTTE, N.C. (AP) — Carolina Panthers coach Matt Rhule said he and general manager Scott Fitterer went through about 50 different scenarios the morning of the NFL draft and very few of them had Ikem “Ickey” Ekwonu falling to them with the sixth pick.

But after defensive players were taken with the first five picks and the Panthers in need of a left tackle, they unexpectedly found themselves with the choice of the top three in the draft — Ekwonu, Alabama's Evan Neal and Mississippi State's Charles Cross.

“All of them had great traits and we would have been happy with any of them,” Fitterer said. “What we really like about Ickey is he is a tone setter. He has the intelligence and the physical style of play. He brings all of the intangibles that we want as well as the physical attributes.”

The Panthers briefly considered trading down a couple of spots in the draft, but decided against it.

The 6-foot-4, 310-pound Ekwonu is expected to start at left tackle, a position of need for the Panthers since Michael Oher retired in 2016, one year after they went to the Super Bowl.

Ekwonu, whose nickname “Ickey” was given to him by a youth football coach who thought he played like former Cincinnati Bengals running back Ickey Woods, is considered light on his feet and has the ability to lock up defenders with his long arms.

He said he'll bring “violence and physicality” to the Panthers.

Ekwonu went to Providence Day High School in Charlotte and grew up a Panthers fan. He was at Bank of America Stadium cheering on the Panthers when they thumped the Arizona Cardinals 49-15 in the 2015 NFC Championship game to reach the Super Bowl.

He wore a Thomas Davis jersey growing up and met the former Panthers linebacker in Las Vegas a few hours before the NFL draft.

Ekwonu said staying in Charlotte — where he plans to buy his own place rather than living with his family — gives him one less thing to think about as he begins his professional career.

“The fact that every step of my football journey I've been in North Carolina, I think that says something,” Ekwonu said.

Ekwonu wore a green and white suit to the draft representing his Nigerian heritage.

Carolina entered the draft with two glaring needs — quarterback and left tackle — and for weeks fans have debated which direction the team should go. But this draft was heavy on talented offensive tackles and light on standout quarterbacks, so the Panthers elected to add a pass protector.

Ekwonu is the first offensive tackle selected by Carolina since it took Pitt’s Jeff Otah in 2008.

Fitterer has been aggressive in upgrading an offensive line that allowed 52 sacks last season, fifth-most in the NFL.

The team signed guard Austin Corbett from the Super Bowl champion Los Angeles Rams and center Bradley Bozeman from the Baltimore Ravens to fill needs in free agency. Ekwonu gives them yet another another quality player and lead blocker for running back Christian McCaffrey.

“When he came in our building it was like a bolt of energy,” Rhule said of the team’s pre-draft in-person meeting with Ekwonu in Charlotte. “He’s a special person to go along with his physical style of play. There is no doubt that he can pass set and run block. He has all of those tools.”

Sam Darnold and P.J. Walker are the only two QBs on the roster, but Fitterer has said they plan to add another this week. That could potentially mean a trade for a veteran quarterback like Baker Mayfield, Jimmy Garoppolo or Gardner Minshew since the team doesn't have a draft pick in the second or third round.

Carolina's next pick will be No. 137 in the fourth round.