Panthers turn to Mayfield to break cycle of losing 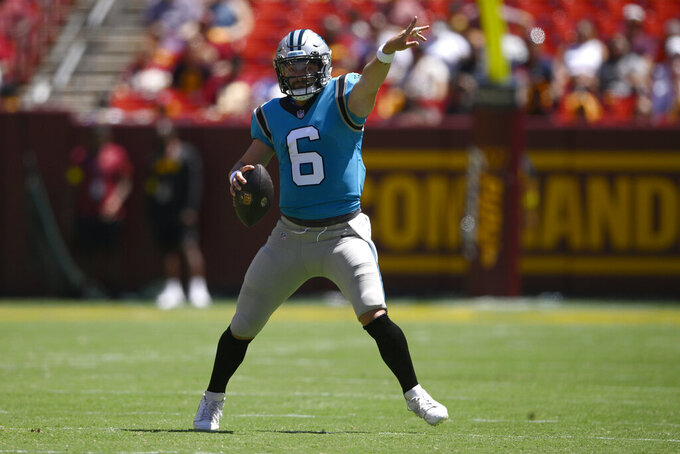 Now that the Carolina Panthers have settled on Baker Mayfield as their QB — their fourth different opening day starter in as many years — the big question becomes whether he's the guy who can break the franchise’s cycle of losing.

The Panthers are coming off back-to-back five-win seasons under third-year coach Matt Rhule and haven’t been to the postseason since 2017. Billionaire owner David Tepper’s patience is growing thin after going 22-43 since purchasing the team in 2018.

Tepper, who was previously a minority owner with the Pittsburgh Steelers, has been around the game long enough to realize it's ridiculously hard to win games — let alone Super Bowls — without a standout quarterback.

That's why Tepper made an aggressive push to land Deshaun Watson after Cam Newton, Teddy Bridgewater and Sam Darnold failed to deliver in the win column.

And it's also why he took a chance on Mayfield, firing yet another dart at the dartboard in hopes of finding something that hits the bull's-eye.

“We’re not going to put any expectations or things like that, looking into the future,″ said Mayfield, who was 29-30 in four years as the Browns starter after being selected No. 1 overall in 2018. “Speaking from my own experience, I’ve stepped into situations where they’ve won one game in two seasons prior to that. I’m not worried what’s happened previously. I always try to focus in the moment and try and get the best out of the guys around me."

Mayfield is essentially on a one-year, prove-it deal.

His contract is up after the season and both he and Darnold, the No. 3 pick in 2018, will become unrestricted free agents.

It won't be easy for Mayfield to turn things around.

He inherits an offense that ranked 30th in the league last season and managed a meager 17.9 points per game.

Christian McCaffrey has missed the 23 of the team's last 33 games due to injuries since the Panthers made him the highest-paid running back in the league.

But Rhule said McCaffrey's injury history won't keep him from using him to his fullest extent.

“I’m not spending my time worrying about, ‘Hey, will Christian get hurt?’” Rhule said. “We are thinking about Christian in one way only — and that’s attack.”

Rhule said the Panthers' defense needs to go “from good to great.” Specifically, that means creating more turnovers and find ways to stop the opponent in the red zone.

Carolina was 30th in the league red zone touchdown percentage and 26th in turnovers forced in 2021.

“Being in the system for three years now, there shouldn’t be any more communication errors,” said defensive end Brian Burns, the team's top pass rusher. “Anything about beating ourselves should be out of the window. That will take us from good to great. Once you get to that great level, the only thing that can beat you is a great play from the offense. There won’t be any self-inflicted problems.”

The Panthers believe they have one of the league's top young defensive backfields with Jaycee Horn returning from an injury, to go along with Donte Jackson and C.J. Henderson at cornerback — as well as Jeremy Chinn and Xavier Woods at safety. Horn and Henderson are former top 10 picks in the draft.

Carolina was second against the pass last season and if Horn returns to full speed following a broken foot that kept him out of 14 games last season it should remain near the top of the league in that area.

The Panthers' biggest challenge on defense will be replacing Haason Reddick, a playmaker who had 11 sacks last season but signed with Philadelphia. Defensive coordinator Phil Snow is counting on Frankie Luvu, Yetur Gross-Matos and Marquis Haynes to take the next step and help fill that void.

The Panthers finished 28th in the NFL overall in special teams productivity, according to Rick Gosselin’s annual special teams report, which ranks all 32 teams in 22 special team categories and compiles an overall ranking.

“I think it’s time for us that special teams starts to affect winning and I think we have the guys to do it,” Rhule said.