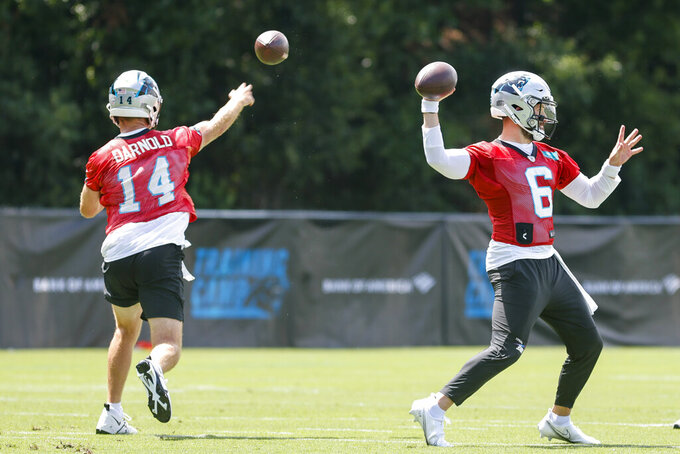 SPARTANBURG, S.C. (AP) — Baker Mayfield developed a reputation in Cleveland as a bit of a gunslinger, willing to make the occasional risky throw downfield if it meant possibly making a big play.

The No. 1 overall draft pick in 2018 may be asked to do things a little differently with his new team, the Carolina Panthers.

“If you take care of the ball, most likely you’re going to win games — that’s the main motto here,” Mayfield said after his first training camp practice with the Panthers at Wofford College.

While Panthers coach Matt Rhule emphasized he wants his quarterbacks to play “aggressive,” he also said they need to be smart and “eliminate careless mistakes” and “not try to do too much.”

Mayfield understands there needs to be a balance.

“There is a time to be aggressive and try to push the ball down the field without being stupid and careless,” he said. "There is aggressiveness and then there is carelessness — and there's a fine line between those. Knowing when to take your shots when you have a one-on-one, and not to get too greedy and play within the flow of the game.”

The Panthers turned the ball over 29 times in 2021, second most in the NFL behind only the New York Giants (30). Carolina’s minus-13 turnover differential is a big reason it finished 5-12 and missed the playoffs for the fourth straight season.

“The whole key to football ... is how explosive can you be and how few turnovers can you have? It’s risk-reward, like anything else," Rhule said. "The way we want to handle that is being aggressive with the play calls, but take what’s there.”

Specifically, Rhule said that means dumping the ball down to running back Christian McCaffrey, a 2019 All-Pro selection, instead of forcing the ball into traffic when no one is open or holding onto the ball too long in the pocket and taking a sack.

“We got backs that we think can make plays,” Rhule said matter-of-factly.

Mayfield had one interception during his first practice, underthrowing his receiver on a deep ball. But he also made some good throws during an up-and-down 90-minute morning session.

That's largely to be expected as Mayfield is just beginning to dip his toes into offensive coordinator Ben McAdoo's playbook after being acquired just three weeks ago in a trade.

“It’s been unique because I haven’t been able to talk to coaches until now and be in meetings with them,” Mayfield said. “Teaching yourself the offense is different than learning it from who’s coaching it."

Sam Darnold, who is Mayfield's primary competition for the starting job, took the first-team reps. Rhule said Mayfield will get his turn with the starters on Thursday.

“The thought process is we want our guys to work with the same receivers for the entire day,” Rhule said.

This is the first time the 27-year-old Mayfield has found himself in a battle for the starting job since 2015 at Oklahoma. But he said he's not focused on his competition with Darnold, adding that he just wants to get better and help the team win.

“If I’m playing my best ball, things will take care of itself," Mayfield said.

Mayfield joked that his biggest mistake on day one might have been underestimating the legendary Spartanburg heat.

“I’m pretty stupid for wearing long sleeves and pants," he said as he wiped the sweat from his brow with a towel. “But I’m pretty stubborn so I had to learn for myself."

Cornerback Jaycee Horn, the team's first-round draft pick in 2021, was unexpectedly placed on the PUP (physically unable to perform) list Wednesday after developing soreness in his foot during conditioning drills.

It's the same foot that Horn broke last year, keeping him out of 14 games.

Rhule said he's not worried about the foot developing into a long-term issue.

“We felt it was best to ease him into it,” Rhule said, adding that Horn can rejoin the team at anytime.

NOTES: Cornerback Rashaan Melvin informed the team he has retired from the NFL. The 32-year-old Melvin played in 10 games for the Panthers last season and had 16 tackles. ... Brady Christensen opened training camp working as the first-team left tackle ahead of first-round draft pick Ickey Ekwonu. Christensen later moved inside to left guard with Ekwonu taking over at left tackle.