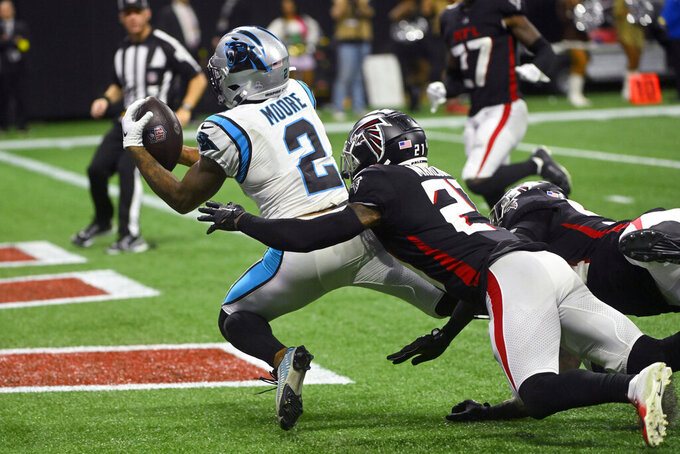 CHARLOTTE, N.C. (AP) — Carolina Panthers wide receiver D.J. Moore said he doesn’t have any regrets about taking his helmet off after hauling in a 62-yard touchdown on a Hail Mary pass from P.J. Walker last Sunday against the Atlanta Falcons -- a play that may have cost his team first place in the NFC South.

Moore’s unlikely TD catch tied the game at 34 with 12 seconds left, but he and tight end Stephen Sullivan both removed their helmets while celebrating the score and the Panthers were flagged for unsportsmanlike conduct.

That backed up Carolina 15 yards on the extra point attempt, which Eddy Pineiro missed, sending the game into overtime where the Panthers eventually lost 37-34.

“Regrets? Nah, not to that extent,” Moore said Friday. “Should I not have did it? No. Did I do it? Yeah. And I own up to that. It was just like an in-the-moment type of deal. ... (Would I) do it differently in that moment? Nah, probably not.”

Instead of being tied with Tampa Bay, Atlanta and New Orleans in the division at 3-5 — and being 3-0 in the division — the Panthers (2-6) are now in last place and find themselves two games behind the Falcons (4-4) entering Sunday's game at Cincinnati.

Moore noticed on Friday that he was listed No. 1 on ESPN’s “not Top 10” plays of the week.

“Whatever,” Moore said with a smile. "I was like, all right, I guess nobody ever got emotional and did something out of emotion. Granted, I don’t show emotion, but that was like an emotional thing.”

When asked if he feels like the rule should be changed to allow such celebrations, Moore replied, “I don’t care. At the end of the day whether I was off the field or on the field, it shouldn’t have mattered. I don’t think it was excessive, but it is what it is.”