Paton: Broncos convinced Gregory's troubles are behind him 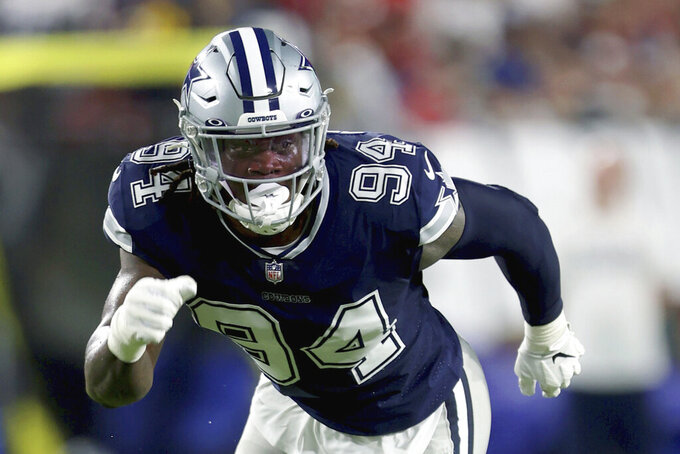 FILE - Dallas Cowboys defensive end Randy Gregory (94) plays in an NFL football game against the Tampa Bay Buccaneers, Thursday, Sept 9, 2021, in Tampa, Fla. The Denver Broncos and defensive end Randy Gregory have agreed on a $70 million, five-year contract that will prevent the Dallas Cowboys from keeping one of their top targets in free agency, a person with knowledge of the deal said Tuesday, March 15, 2022. (AP Photo/Don Montague, File)

ENGLEWOOD, Colo. (AP) — George Paton was so convinced that Randy Gregory's troubles are behind him that he ponied up $70 million for the pass rusher with a suspension-filled seven-year stint in Dallas.

“We talked to a lot of people within the Cowboys organization, people who have been around Randy and his path and we felt like we knew him and then when we spoke with him, really felt good about it,” the Broncos general manager said Friday.

“You always do your due diligence. You hear things, you read things, you talk to people. We felt good about the people we talked to, and then when I talked with him, I mean, that’s that’s all I needed to do,” Paton added.

“Where he is now. How he got here. He comes from a great family, a two-parent home. He’s got a wonderful wife, daughter. So, it’s a success story and we feel really good about it.”

Gregory has stayed out of trouble since being activated from the commissioner's exempt list on Oct. 20, 2020.

Although he missed time last year because of COVID-19 and a calf injury, he's coming off a productive (six sacks, one interception) and drama-free season. The Cowboys hoped the goodwill built from standing by a troubled player would lead to a return to Dallas, and they even tweeted earlier this week that they had a deal in place to keep him from leaving.

Gregory’s agent, Denver-based Peter Schaffer, balked at some contract language, however, and Gregory wound up signing with the Broncos, who guaranteed him $28 million.

“We thought he was going to the Cowboys,” Paton said. “You win some, you lose some. We thought we lost them, you know, and then woke up in the morning and felt a lot better once we realized he was coming” to Denver.

Von Miller had expressed an interest in returning to Denver after helping the Los Angeles Rams to a Super Bowl triumph following his mid-season trade. But the Broncos never called and he wound up signing a megadeal with the Buffalo Bills.

“Randy was our priority in free agency,” Paton said. “We wish Von the best, and he's going to do great things in Buffalo.”

Paton said he felt good about his pass rush group led by the oft-injured Bradley Chubb, Jonathan Cooper and Malik Reed, but “with the quarterbacks in our division we really needed a difference maker, and I feel like we have one in Randy Gregory.”

The Broncos had hoped to introduce Gregory earlier in the week but a snowstorm and some procedural hiccups delayed things until Friday.

“The reason that this is such a special day is for everything that Randy has gone through,” Paton said. "And you know, we did a lot of homework on Randy like we do with all the free agents and he’s beloved in the in the Cowboys building for everything he’s come through, the hard work, the perseverance, the grit that he showed.

“We all go we all go through stuff and he went through it and he came through the other side and look at him today.”

Gregory said he'll prove to the Broncos and their fans that Paton was right to place such trust in him.

“It's been a real crazy week. ... but for me being here with the Denver Broncos makes this whole week worth it,” Gregory said. “It’s been crazy. Even the last 48 hours just trying to get this deal hammered out. There’s been worth the wait. My family’s happy. I believe the Broncos are happy. I’m happy. So really looking toward the future.”

Gregory added, “I’ve done a lot of growing up over the last few years and I'm a lot different player and person now.”

Gregory said newly acquired quarterback Russell Wilson reached out to him multiple times this week as he was making a decision on his future.

“I really felt that they not only needed me here but wanted me here,” Gregory said.

He said the Broncos asked him tough questions about his past, which includes four substance-abuse suspensions, including one that kept him out all of 2019.

“They asked all the right questions,” Gregory said. “My agent told Mr. Paton you can ask any question you want, everything's fair game, and Randy's going to be as honest with you as he can be. ... I think everyone really felt comfortable with my answers.”

NOTES: Paton indicated the Broncos will look to extend Wilson's contract, which has two years remaining. “We are open,” Paton said. “We obviously want him here a long time, but you know nothing's imminent. I'm sure we'll talk here soon. But we didn't make this trade not to have him here for a very long time.” Wilson's reworked deal will likely approach the $50 million annually that Green Bay inked QB Aaron Rodgers to earlier this month. His current contract calls for him to earn about half that much this season. ... George said he'd like to re-sign free agents Kareem Jackson and Bryce Callahan.