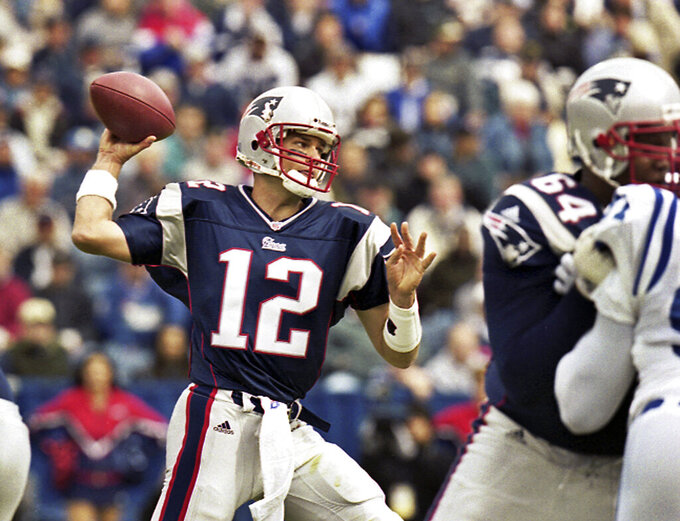 FILE - In this Sept. 30, 2001 file photo, New England Patriots quarterback Tom Brady (12) passes during Brady's first start of an NFL football game against the Indianapolis Colts in Foxborough, Mass. Six quarterbacks were taken ahead of the future first-ballot Hall of Famer Brady in 2000 before the Patriots selected him 199th overall in the sixth round of the NFL draft, forever altering the course of their franchise’s history. (AP Photo/Winslow Townson, File)

BEST FIRST-ROUND DRAFT PICK: DL Richard Seymour. Chosen sixth overall in 2001, Seymour is the highest selection made by Bill Belichick during his Patriots tenure. He was one of the most destructive forces on the defensive side of the ball for New England’s first three Super Bowl-winning teams in the 2001, 2003 and 2004 seasons. He made three straight All-Pro teams from 2003 to 2005.

BEST SECOND-ROUND DRAFT PICK: TE Rob Gronkowski. With a fun-loving personality as large as his biceps, Gronk was chosen 42nd overall in 2010. He would go on to become one of the top tight ends in the league. A favorite target of Tom Brady (more on him shortly), Gronk and Brady linked up for 78 touchdowns — the second-most scoring connections between a QB and a tight end in NFL history. He posted his fourth career 1,000-yard receiving season in 2017, earning All-Pro honors for the fourth time. His 12 career postseason touchdown receptions are the most by a tight end in NFL playoff history.

BEST LATE-ROUND DRAFT PICK: QB Tom Brady. Six quarterbacks were drafted before the Patriots selected Brady in the sixth round in 2000, forever altering the course of the franchise. Following Drew Bledsoe’s injury in the second game of the 2001 season, Brady took over as the starter and led the Patriots to their first of six Super Bowl wins with him at QB. The 20-year run included him being named regular-season MVP three times and winning four Super Bowl MVP trophies.

WORST FIRST-ROUND DRAFT PICK: DL Kenneth Sims. Sims was the No. 1 overall pick out of Texas in 1982. He would appear in only 74 games over the next eight seasons. He tallied just 17 total sacks and was waived in 1990 after being arrested for drug possession and showing up to training camp out of shape.

WORST SECOND-ROUND DRAFT PICK: CB Ras-I Dowling. The Patriots traded their third-round pick in 2010 to Carolina for what turned into the top pick of the second round in 2011. New England used it to select Dowling, who ran 4.4 seconds in the 40-yard dash at the NFL Combine. But he appeared in just nine games over the next two seasons, which included two stints on injured reserve. His production was also minimal, accounting for only 10 tackles. He was cut in 2013.

BEST DRAFT TRADE: The Patriots traded their first-round pick in 2013 (29th overall) to Minnesota in a package that netted them picks in the second (52nd overall), third (83rd overall), fourth (102nd overall) and seventh (229) rounds. New England used two of those picks to grab linebacker Jamie Collins in the second round and cornerback Logan Ryan in the third round. Both turned out to be highly productive in Patriots uniforms, Collins in a pair of stints in New England.

WORST DRAFT TRADE: New England traded its 2006 second-round pick (52nd overall) and third-round pick (75th) to Green Bay for the No. 36 selection, which it used on receiver Chad Jackson out of Florida. Jackson had lots of speed, but rarely got to show it. He appeared in 12 games as a rookie, catching 13 passes for 152 yards and three touchdowns. But he didn’t catch a single pass in two games during his second season and was cut in 2008. Oh, about that second-round pick the Patriots traded to Green Bay — the Packers used it to draft two-time Pro Bowler Greg Jennings.

DID YOU KNOW THEY ONCE DRAFTED?: DT-C Phil Olsen. The brother of Hall of Fame lineman Merlin Olsen, Phil was selected by the then-Boston Patriots with the fourth overall pick in the 1970 draft. But he was injured prior to the start of his rookie season and never appeared in a game for the Patriots. Instead, a contract loophole allowed him to opt out of the deal and he joined the Rams the following season. He spent six years in the league with the Rams and Broncos, but never matched the on-field success of his older sibling.