Patriots have chance to lock up AFC East title vs. Bills 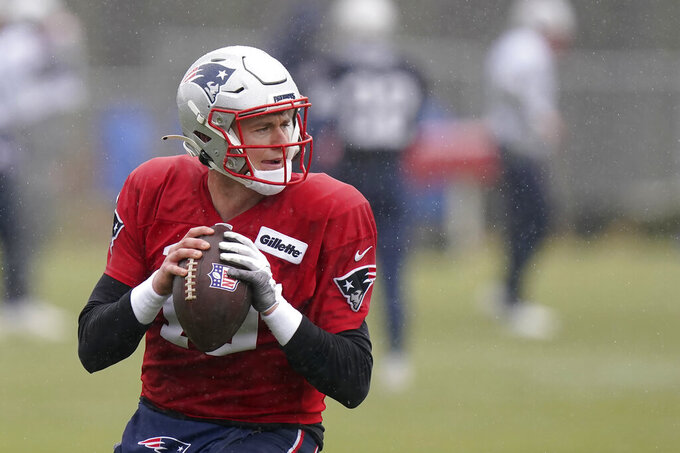 BETTING LINE: Patriots by 2, according to FanDuel Sportsbook.

TURNOVER DIFFERENTIAL: Bills plus-8; Patriots plus-9.

BILLS PLAYER TO WATCH: MLB Tremaine Edmunds. With Buffalo's top run-stuffer Star Lotulelei's status uncertain for personal reasons, Edmunds will need to shore up a run defense that has allowed a combined 510 yards in its past three games, including 222 against New England.

PATRIOTS PLAYER TO WATCH: QB Mac Jones. He leads all rookie quarterbacks with 3,168 passing yards and 18 touchdowns. He needs two TDs to become the 15th rookie to reach 3,000 yards passing and 20 touchdowns.

KEY MATCHUP: Jones vs. Buffalo's secondary. The rookie is coming off a rough outing against the Colts in which he had a pair of bad interceptions and completed 58% of his passes, his second-worst completion percentage of the season. He got away with throwing only three passes in the first outing against Buffalo because of windy and wet conditions, but will likely need to do more this time against the NFL’s top-ranked pass defense.

KEY INJURIES: Bills WRs Cole Beasley and Gabriel Davis won't play after landing on the COVID-19 list, while WR Emmanuel Sanders is on track to return after missing last week with a knee injury. Coach Sean McDermott said it's uncertain if Lotulelei will play. It's also unclear if starting LT Dion Dawkins and starting RG Jon Feliciano can be cleared off COVID-19 list in time to play. Feliciano's backup, Cody Ford, was placed on the list on Friday. … Patriots RB Damien Harris sat out last week’s loss to Indianapolis with a hamstring injury and was limited to begin the week of practice, along with rookie RB Rhamondre Stevenson (illness). WR Kendrick Bourne was one of four Patriots who entered the week on the COVID-19 list, along with LBs Harvey Langhi, Cameron McGrone and Ronnie Perkins. Bourne leads the team with 45 receptions and 667 receiving yards. He tops all Patriots receivers with five TD catches.

SERIES NOTES: The Patriots have won 36 of the last 43 games between the clubs dating back to 2000, but are 1-2 vs. Buffalo without Tom Brady. New England is 39-22 at home against Buffalo, including a 16-3 record at Gillette Stadium. The Patriots will be trying for their 28th series sweep overall and 16th under Bill Belichick.

STATS AND STUFF: New England clinches the AFC East with a win plus a Miami loss or tie at New Orleans. There are also multiple combinations in which a Patriots win and losses by the Raiders, Colts, Chargers, Bengals or Ravens would clinch a playoff berth for New England. … If the Bills win, they’d be back in first place in the division, hold tiebreakers over the Patriots and Dolphins and be in the driver’s seat to win their second straight title. … With three TDs passing last weekend, Josh Allen increased his season total to 31 in becoming Buffalo’s first player with 30 or more TDs passing in consecutive seasons. ... Allen has committed a turnover in seven consecutive games over which he has nine interceptions and two lost fumbles versus 15 TDs (including one rushing). ... Allen’s career record is 19-17 with a turnover. ... With 82 catches, WR Stefon Diggs joins Eric Moulds (2004-05) in becoming Buffalo’s second player to top 80 in consecutive years. And with 1,007 yards receiving, Diggs joins Stevie Johnson (2010-12) as Buffalo’s second player to top 1,000 yards in consecutive seasons. ... Third-year RB Devin Singletary had a career-best 22 carries and a season-high 86 yards rushing and a TD last weekend. ... The Bills are 7-1 with a TD rushing this season. ... DE Efe Obada had a career-best two sacks last weekend. ... Buffalo limited the Panthers to converting 1 of 5 fourth-down opportunities. ... After allowing 100 yards rushing to opponents twice in its first nine games, Buffalo has allowed 100-plus in four of five. … A win would give the Patriots their 27th 10-win season since the 1970 merger. ... The Patriots are allowing a league-low 16.2 points per game. ... Through 14 games, Jones has completed 69% of his passes. The best completion percentage for a season by a rookie quarterback is Dak Prescott at 67.7% in 2016. Jones also needs one more game with a completion percentage of 70% to tie Prescott’s rookie record (nine). ... RB Harris leads the Patriots with a career-high nine rushing TDs. ... TE Hunter Henry holds the NFL lead among tight ends with career-high nine TD receptions. ... LB Matt Judon leads the team with 12 1/2 sacks, tied with Chandler Jones (12 1/2 in 2015) and Mike Vrabel (12 1/2 in 2007) for the most in a season by a Patriots player under Belichick. ... CB J.C. Jackson is second in the NFL with seven interceptions behind Dallas’ Trevon Diggs (10). ... K Nick Folk leads the NFL with a career-high 34 field goals.

FANTASY TIP: If Harris remains healthy this week, he’s a good bet. He had a season-high 111 rushing yards and rushed for the Patriots’ lone TD in the first matchup with Buffalo.