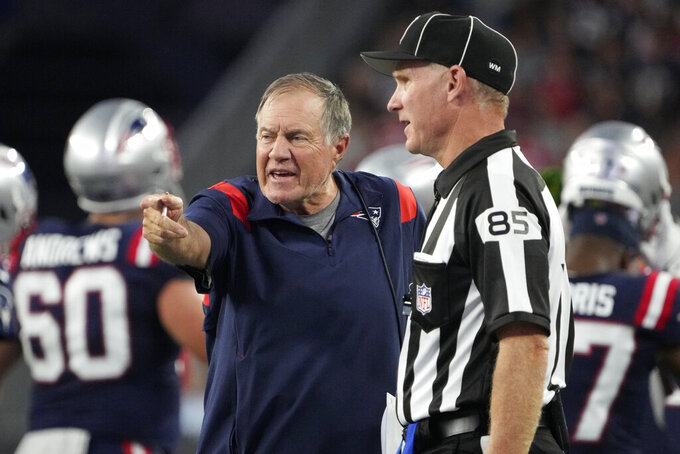 NEW ENGLAND PATRIOTS (10-8; lost to Buffalo in wild-card round)

Strengths: Mac Jones has a lot to live up to after a 2021 Pro Bowl season in which his 22 touchdowns and 3,801 passing yards led all rookie quarterbacks. Though the playbook has changed some following McDaniels’ exit as offensive coordinator, he's show a greater command of the huddle and should benefit from the additional talent around him.

Weaknesses: The offensive line had some growing pains during training camp. Trent Brown moved back to his natural position of left tackle, the learning curve for rookie Cole Strange has been accelerated as he looks to fill Shaq Mason’s spot at left guard, and Mike Onwenu seems to be back on the right side of the line full time after bouncing around a bit last season. Finding the right mix will be key for how well the offense performs in Jones’ second season.

Camp Development: Rookie Tyquan Thornton stood out prior to his shoulder injury during the second preseason game. Free agent addition Ty Montgomery also looks as if he’s found a home in New England after three quiet seasons following his 2018 trade from Green Bay. He is the leading candidate to fill James White’s role as a pass catcher out of the backfield.

Fantasy Player To Watch: WR DeVante Parker. Injuries limited his numbers over the past two seasons in Miami. But he looks healthy and if training camp is any indication, he’ll be someone Jones looks to often in the offense. That could mean Parker approaching the career numbers he had in 2019, when he had 72 receptions for 1,202 receiving yards and nine TDs.

Expectations: It will be an interesting year for the Patriots. They’ve certainly improved on paper, addressing needs at receiver and linebacker. But the offense didn’t seem completely comfortable without McDaniels calling the plays during the preseason. In a suddenly talent-rich AFC East, New England will likely need some late-season victories to be in the mix for a wild-card spot.