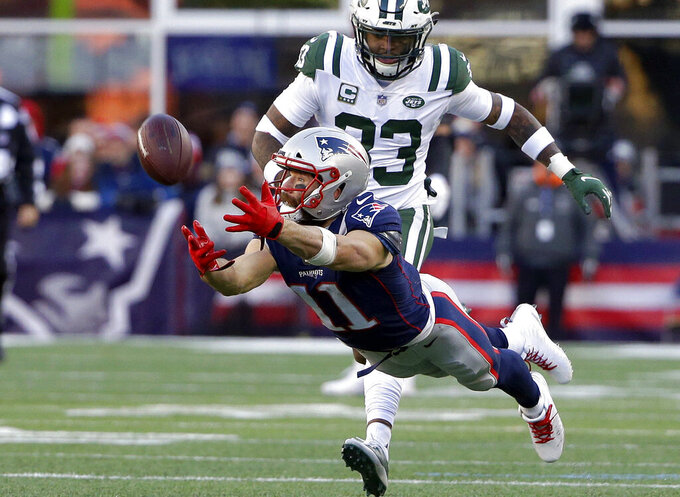 ADDS RETIREMENT ANNOUNCEMENT FILE — In this Sunday, Dec. 30, 2018 file photo New England Patriots wide receiver Julian Edelman (11) stretches but cannot catch a pass in front of New York Jets safety Jamal Adams, rear, during the second half of an NFL football game, in Foxborough, Mass. The Patriots terminated Edelman's contract with a failed physical designation Monday, April 12, 2021, according to the NFL's transaction wire. Citing a knee injury that cut his 2020 season short after just six games, Edelman announced Monday that he is retiring from the NFL after 11 seasons. (AP Photo/Steven Senne, File)

He says he'll leave the league after giving everything he had to the sport.

Citing a knee injury that cut his 2020 season short after just six games, Edelman announced Monday that he is retiring from the NFL after 11 seasons.

“Nothing in my career has ever come easy. And no surprise, this isn’t going to come easy either,” Edelman said fighting back tears in a video posted to Twitter. “I’ve always said I’m going to go until the wheels come off. And they finally have fallen off."

Earlier in the day, the Patriots terminated the contract of the Super Bowl 53 MVP after the receiver failed a physical.

It brings an abrupt end to the 11-year New England tenure of the 34-year-old, whose fingertip catch helped complete the Patriots’ historic Super Bowl 51 comeback win over the Atlanta Falcons.

“By any measure of what constitutes an elite NFL career — wins, championships, production — Julian has it all,” Patriots coach Bill Belichick said in a statement. “Few players can match Julian’s achievements, period, but considering his professional trajectory and longevity, the group is even more select. It is historic. This is a tribute to his legendary competitiveness, mental and physical toughness and will to excel."

Team owner Robert Kraft called Edelman “one of the great success stories in our franchise’s history.”

He appeared in just six games last season before going on injured reserve following a surgical procedure on his knee. He also missed the entire 2017 season after tearing the anterior cruciate ligament in his right knee.

Edelman was entering the final season of a two-year, $15.5 million contract. He was facing an uphill climb to make the roster in 2021 following the Patriots’ efforts to remake the receiving group after their struggles last season. This offseason the Patriots have already added receivers Kendrick Bourne and Nelson Agholor in free agency.

A seventh-round pick in the 2009 draft out of Kent State, Edelman retires ranked second in team history with 620 receptions, fourth in receiving yards 6,822 and ninth with 36 receiving touchdowns.

Edelman will be most remembered for what he did during the postseason, though, amassing 118 catches for 1,422 yards and seven touchdowns.

“On the biggest stage and in the biggest moments, you always came through,” Brady said in a tweet. “You never lost that chip on your shoulder and you never let anyone define you as a person or player. I’m proud of you Jules. Love you.”

He reached his pinnacle in Super Bowl 53 when he hauled in 10 receptions for 141 yards in helping lift the Patriots to a 13-3 victory over the Los Angeles Rams.

“Day in and day out, Julian was always the same: all out,” Belichick said. “Then, in the biggest games and moments, with championships at stake, he reached even greater heights and delivered some of his best, most thrilling performances.”