Pats' Gilmore, 7 others will start training camp on PUP list 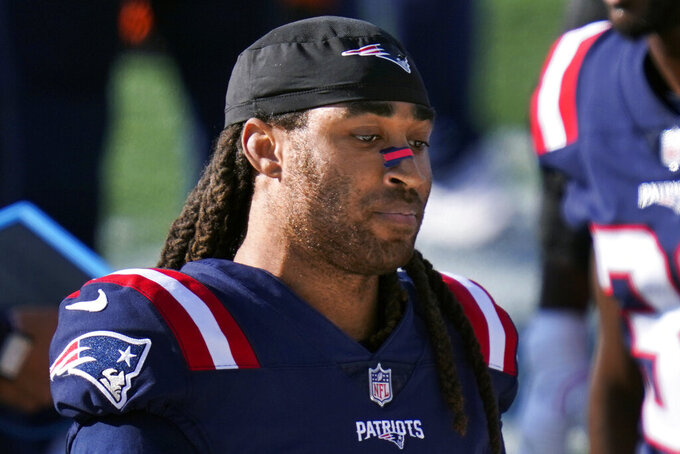 FILE - In this Oct. 18, 2020, file photo, New England Patriots cornerback Stephon Gilmore stands along the sideline during the second half of the team's NFL football game against the Denver Broncos in Foxborough, Mass. Gilmore has reported to the team for training camp but will start it on the physically unable to perform list. Gilmore was one of eight Patriots players added to the list ahead of the official start of camp next week (AP Photo/Charles Krupa, File)

BOSTON (AP) — New England Patriots cornerback Stephon Gilmore has reported to the team for training camp but will start it on the active/physically unable to perform list.

Gilmore was one of eight Patriots players added to the list Thursday ahead of the official start of camp next week. Quarterback Jarrett Stidham, defensive end Chase Winovich, defensive tackle Byron Cowart, linebacker Terez Hall, tight end Dalton Keene, linebacker Brandon King and receiver Devin Smith also will be sidelined when camp begins. They are all eligible to be removed from the list at any time.

The 2019 NFL Defensive Player of the Year, Gilmore's status for the regular season remains uncertain as he looks to get additional compensation entering the final season of the five-year, $65 million deal he signed in 2017. He is scheduled to make a base salary of $7 million this season.

He is also scheduled to receive a $500,000 roster bonus, but even with that his 2021 compensation would rank him 25th among NFL cornerbacks.

Gilmore sat out both the voluntary and mandatory portions of New England’s offseason program in May and June. He will turn 31 in September and tied a career low with one interception last season.

He appeared in just 11 games after missing time due to a COVID-19 diagnosis and a season-ending quadriceps injury late in the season that required offseason surgery.