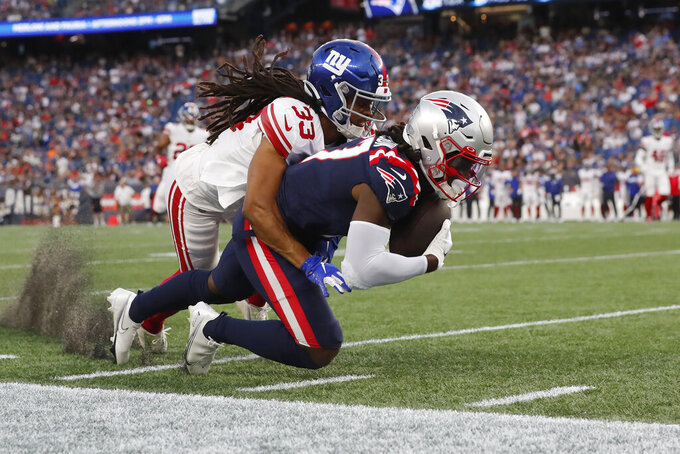 FOXBOROUGH, Mass. (AP) — With most of their starters watching from the sideline after being given the night off, the Patriots used their first exhibition outing on Thursday night to evaluate the newest faces on their roster.

After struggling to find productive contributors via the draft in recent years, the top two picks of the Patriots' 2022 rookie class seem poised to end that streak.

Strange, taken in the first round out of Chattanooga, seemed comfortable in limited action. He started the game and played in the first two series (14 plays), the second of which ended in a 2-yard touchdown pass from Brian Hoyer to Thornton.

Thornton logged 22 plays on the night and caught both of the passes thrown his direction for 9 yards. The TD catch was the first of his two receptions and included him fighting free from Giants cornerback Aaron Robinson, who was whistled for defensive holding on the play.

“It was just basic fundamentals,” Thornton said. "It was something that we worked on throughout the week, putting emphasis on the red zone and it just goes to show that hard work definitely pays off.”

Taken in the second round out of Baylor, Thornton logged the fastest 40-yard dash time among receivers at March’s NFL combine. His speed continues to stand out as he tries to establish himself in a receiver group that includes returners Kendrick Bourne, Jakobi Meyers and Nelson Agholor, along with offseason acquisition DeVante Parker.

Patriots rookies are traditionally given high jersey numbers to wear early during camp before being issued an official one before the preseason opener. Thornton shed the No. 51 for the No. 11 previously worn by Drew Bledsoe and Julian Edelman.

“Julian, he was a great receiver. I’m kind of proud to wear that number after him,” Thornton said.

Strange was brought in to fill the void left after the Patriots traded Shaq Mason to Tampa Bay. He said playing in his first game felt like a continuation of practice and that he continues to grow “in every way possible.”

“In college, coaches would point out to me that there were times when I would hesitate off the ball I guess because I was thinking. Not all the time, but every now and then you could kind of see me doing that,” he said.

“That’s something I’ve worked on. I feel like my technique and pass protection’s gotten better, just because we’ve been hammering the fundamentals. I feel like I’ve improved in that, too.”

Hoyer said he measured Strange’s performance by how his jersey looked in the mirror after the game.

“I came out clean, so that’s all I know,” Hoyer said. “They did a great job protecting me and kind of hard for me to see how he’s doing, but all I know is I didn’t get hit very much, so that’s always a good sign.”