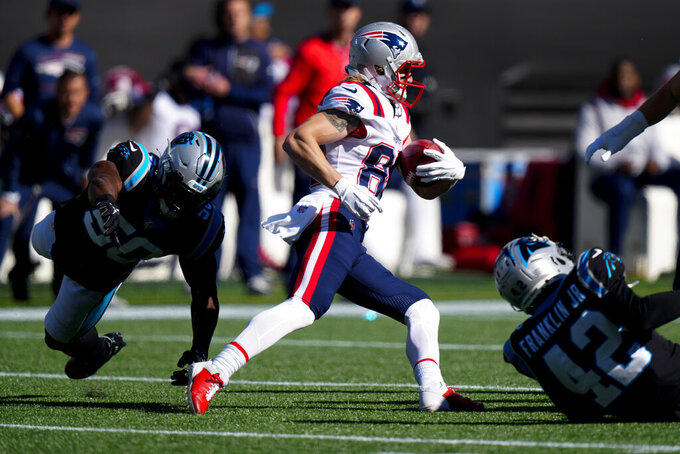 CHARLOTTE. N.C. (AP) — Bill Belichick has the blueprint for beating Sam Darnold, and it starts with disguising coverages.

His players just seem to do the rest.

New England's defense intercepted Darnold on three consecutive possessions in the second half — including one that J.C. Jackson returned 88 yards for a touchdown — and the New England Patriots cruised past the Carolina Panthers 24-6 on Sunday for their fourth win in the past five games.

Belichick is 4-0 against Darnold, and the quarterback has thrown nine interceptions and one touchdown pass in those outings.

“We disguise," said Jackson, who also intercepted Darnold in the end zone to prevent another scoring opportunity. “Our defense disguises pretty good. Every year he’s had a hard time.”

“They play man coverage and try to create picks and create confusion up front,” Darnold said. “I think that’s the biggest thing they do and they do a really good job of it. But I think it comes down to my decision-making. We had guys in places that we wanted and just couldn’t get them the ball and I turned it over a few too many times.”

Added Belichick: “We were able to create some pressure. Our defense came to play today.”

Mac Jones overcame two early turnovers and threw for 139 yards and a touchdown, rookie running back Rhamondre Stevenson had 106 yards from scrimmage before leaving the game with a head injury and Damien Harris and Hunter Henry scored touchdowns as the Patriots (5-4) improved to 4-0 on the road.

“Getting a win on the road is a hard thing to do and we’ve done a good job of that this year," Jones said. “The defense was lights-out.”

As has been the case for most of the year, Darnold spent most of the game under heavy duress and it didn't help the Panthers lost starting center Matt Paradis and left tackle Cameron Erving to injuries in the first half.

A person with knowledge of the situation said Paradis tore the ACL in his left knee on the second play of the game and will miss the remainder of the season. The person spoke to The Associated Press condition of anonymity because the Panthers have not announced the status of the injury.

Unlike two weeks ago, Panthers coach Matt Rhule decided against benching Darnold against the Patriots.

“I wanted to give him a chance to play his way out of it," Rhule said. "It just seemed like the right thing to do.”

Even the return of Christian McCaffrey from a five-game absence couldn't help Carolina's offense. McCaffrey had 14 carries for 52 yards and caught four passes for 54 yards, but the Panthers have only scored one touchdown in the past three games.

McCaffrey said he came out of the game injury-free.

Carolina's only points came courtesy of its defense, which forced two Jones turnovers in New England territory in the first half — one off Brian Burns' sack-fumble and another when former Patriots cornerback Stephon Gilmore had an interception.

The Panthers trailed 14-6 at halftime after gaining just 65 yards in the first half.

The game changed for good in the third quarter when Darnold rolled out of the pocket on a second down play and overthrew tight end Ian Thomas. Jackson intercepted the ball and raced 88 yards down the middle of the field for his first NFL touchdown.

Jackson, who nearly didn't play at all after suffering from strep throat earlier in the week, said he just made a good read on the ball while playing zone coverage.

“I had my eyes on the quarterback and the ball," Jackson said. "That’s what I do.”

Things continued to unravel from there with Darnold picked off on his next two possessions as well, including another by Jackson in the end zone on a ball that was thrown up. After that interception, wide receiver Robby Anderson followed Darnold off the field, threw his helmet toward the bench and proceeded to give the quarterback an earful as he passed by him twice on the sideline.

Panthers linebacker Haason Reddick was upset after the game at Jones, who grabbed the foot of Burns and wouldn't let go after a sack-fumble that prevented Burns from a potential scoop and score. Reddick called it a “completely dirty play” by Jones and said he hopes the league addresses it this week.

Jones was not flagged on the play for holding.

Burns appeared to be hurt on the play, but returned to the game on the next series. Reddick said Jones' grab could have resulted in a serious injury.

“I understand that everybody is competing, but I don't think there is no room for things like that inside the game," Reddick said. "... Nobody wants to see anybody get hurt. For no penalty to be thrown, I think it's egregious and I think it is unfair."

Jones was not asked about the incident after the game.

Referee Clete Blakeman said after the game in a pool report it is a “subjective call" when it comes to holding.

“This is something we can’t discuss, relative to subjective calls like that, what rises to the level of a hold or is not a hold,” Blakeman said. "That is something the league office will deal with in the evaluation of our game.”

Patriots: Running backs Damien Harris and Rhamondre Stevenson and wide receiver Gunner Olszewski left the game with head injuries and did not return. Harris' injury came in the fourth quarter with the game out of hand. Tight end Jonnu Smith injured his shoulder in the second half.