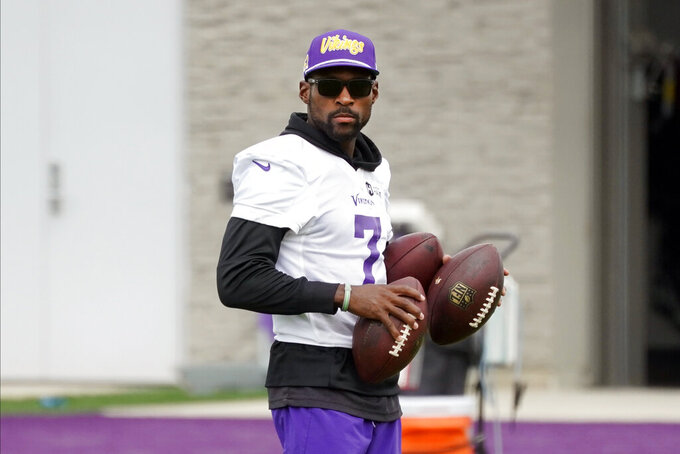 Minnesota Vikings' Patrick Peterson, entering his 11th season in the NFL and his first with the Vikings watches during NFL football training camp, Thursday, Aug. 5, 2021, in Eagan, Minn. Peterson took advantage of a new rule to make the switch to his long-favored No. 7, with cornerbacks now allowed to wear any number from 1 to 49. Several of Peterson's peers around the league have done the same, many of them cornerbacks. (AP Photo/Jim Mone)

EAGAN, Minn. (AP) — When Patrick Peterson found out about the NFL rule change expanding the ranges of jersey numbers that players are allowed to wear, he quickly contacted one of his new teammates on the Minnesota Vikings.

The eight-time Pro Bowl cornerback wanted his trusty No. 7 again, after being forced to take No. 21 when he entered the league. Backup quarterback Nate Stanley had no problem giving it up and taking No. 14 instead.

“He said yes. All I had to do was get his dad's high school team some shoulder pads,” Peterson said. “I said, ‘Done!'”

While the boys in Stanley's hometown of Menomonie, Wisconsin, ought to be a little bit better protected while they're blocking and tackling under the lights this fall, Peterson will feel a bit more comfortable himself in the single-digit identity he forged for himself at Blanche Ely High School in Pompano Beach, Florida, and then in college at LSU.

“I was known by that number, and I believe that if you’re known by a number, nine times out of 10 you’re a great player,” Peterson said, pointing to the No. 2 worn by Hall of Fame cornerback Deion Sanders at Florida State and the No. 21 he wore as a pro. “When you see that number, you see that person. I'm just happy to finally not only be back in purple but also to wear No. 7.”

The updated guidelines approved by the league this spring opened up Nos. 1-19 for running backs and defensive backs, who were previously limited to Nos. 20-49. Running backs can choose from 80-89 now, too. Wide receivers were also granted the rights to single digits, after being slotted before from 10-19 and 80-89. Tight ends were assigned 40-49 and 80-89 before, but they can now take 1-39 as well. Linebackers were let in to the single-digit club, too, and allowed to take 20-39 in addition to their customary 40-59 and 90-99.

Temporary deviations from the position-by-position guidelines are allowed during spring and summer practices when rosters are larger, but unless the commissioner grants special permission the rules must be adhered to during the regular season.

Vikings defensive tackle Sheldon Richardson, who signed with the club this summer and was uninspired by the No. 67 he was offered, picked No. 9 for training camp. He's going to have to pick something else in September, mildly irked that linebackers can flash single-digits but linemen can't.

For this year only, players seeking to change numbers within the allowable ranges for their position were required to first buy out all the remaining inventory of jerseys in their likeness through the NFL's official distributors. They sell for an average around $200, so there may be a second wave of switchers next year once the tab disappears.

Still, there were plenty of players, many of them cornerbacks like Peterson, who signed up right away for a fresh start.

Los Angeles Rams cornerback Jalen Ramsey previously balked at the asking price of a change while he was with the Jacksonville Jaguars, but now that single-digits were in play he took No. 5 in favor of his old No. 20. Ramsey's first choice was No. 2, but he yielded to wide receiver Robert Woods, who discarded No. 17.

“The reason for me wanting No. 2 was really to remember I’m second, like in life. I wanted to put others before myself,” said Ramsey, who playfully traded pictures earlier this year with Woods of them each wearing No. 2 in Pop Warner youth games.

Woods, a native of Los Angeles, wanted to wear his original number as an inspiration for kids playing the game he once did in the same city.

Arizona Cardinals running back James Conner left his No. 30 behind with the Pittsburgh Steelers and picked No. 6 with his new team — a first for his career.

“It’s just a changeup. I think it looks good on uniforms, too. But I’ve got to play good in it. That’s first,” Conner said.

Baltimore Ravens wide receiver Marquise Brown went from No. 15 to the No. 5 he wore in peewee ball to emulate Reggie Bush, who was then a star USC running back.

Carolina Panthers rookie cornerback Jaycee Horn took No. 8 right out of the gate of his NFL career in memory of his favorite NBA player, the late Kobe Bryant.

New England Patriots cornerback Jalen Mills switched teams from the Philadelphia Eagles and switched in the process from No. 21 to No. 2, to honor the favorite number of his late uncle.

“He wasn’t a real big sports fan, but any time I did play, he did watch me. Hopefully, I just wanted to represent him with that,” Mills said.

Another Patriots newcomer, linebacker Matt Judon, left No. 99 behind with the Baltimore Ravens and picked No. 9 to match his college jersey number — and his family.

“I’m one of 10 children, so I've got nine siblings. Every time I go out there, I represent them," Judon said. "I like nine. That’s one of the reasons I rock it.”

Defensive end Carlos Dunlap wore No. 96 with the Cincinnati Bengals, but that's Cortez Kennedy's retired number so he had to pick something else when he was traded to the Seattle Seahawks last season. After going with No. 43 then, he's wearing No. 8 now — as he did 12 years ago in his final college season at Florida. This is Dunlap's 12th year in the NFL.

“I felt like it was a sign, that it was an opportunity in year 12 with the 12s,” he said, referring to the numeric nickname that Seahawks fans have taken on.

But wait, it gets even better.

“I had eight all through high school, so that’s been my number," Dunlap said. "Eight has surrounded my life if you all want me to go that deep. There are eights in my birthday, eights in my license plate. When they pick my random hotel room, it either adds up to eight or it has an eight in it. Coincidentally, last year I was 43, from the 8-4-3. Eight times 12 is 96. I mean, I can keep going.”