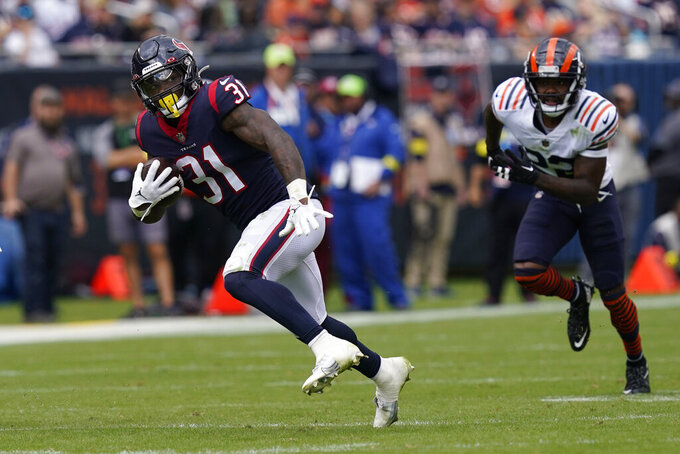 Houston Texans running back Dameon Pierce (31) runs for a gain against the Chicago Bears during the first half of an NFL football game Sunday, Sept. 25, 2022, in Chicago. (AP Photo/Charles Rex Arbogast)

HOUSTON (AP) — High-energy and never without a smile, rookie Dameon Pierce is one of the few bright spots in what’s already become another dismal season for the winless Houston Texans.

Pierce, a fourth-round pick from Florida, had his best game so far in Sunday’s 34-24 loss to the Los Angeles Chargers. He rushed for 131 yards, including a 75-yard touchdown.

Coach Lovie Smith was asked about the breakaway speed Pierce showed on the second-quarter scoring run.

“That’s the reason we’re starting a rookie running back,” Smith said. “He can run in between tackles. He can make you miss in the open field. That’s a part of his game that we haven’t seen. Not many running backs can run for 75 yards in the NFL. That’s hard to do. He’s just kind of showing you all the things that he can do.”

After the game, Pierce clutched the ball he carried for the touchdown and shared where it was headed after he left the locker room.

“That’s going to my momma,” he said. “This was her first game, her first time coming down to Texas, to Houston to see her baby play.”

Pierce is the third Texans rookie to rush for 130 yards or more in a game and his breakaway scamper was the third-longest run in franchise history.

On his long run, Pierce took the handoff and dashed to the right, running through two blocks and then turned on the jets as he barreled toward the end zone. He shed a tackle early and got a block from receiver Brandin Cooks near the goal line.

“It’s a play we’ve been working on all week,” he said. “What’s crazy is in practice we kind of couldn’t get it right. In the game it worked out perfect.”

Left tackle Laremy Tunsil was asked what he saw on the play.

“I knew it was a touchdown,” he said.

Pierce has 313 yards rushing this year and has been the breakout performer on this struggling team. Thanks to him, Houston has greatly improved a running game that ended the last two seasons ranked near the bottom of the league.

He is the fifth rookie running back in the last five seasons to have 300 yards rushing or more in the first four weeks of the season.

“He’s going to get better every week as long as we’re doing what we’ve got to do up front to open up some holes for him,” right tackle Tytus Howard said.

Pierce gave credit for his success to his offensive line.

“Shout out to the big five, man,” he said. “I ain’t nothing without them.”

The Texans were behind 27-7 at halftime before scoring 17 straight points to cut the lead to a field goal in the fourth quarter, but Houston got no closer.

While Pierce is thrilled with his work so far this season, he’s disappointed that it hasn’t led to his first NFL win. But he saw signs on Sunday that the Texans (0-3-1) are improving.

“It’s tough,” he said. “But one thing about this game ... I saw a lot of flashes of a team that we’re capable of being and things we have to build off of. We’ll try to look at the good and not too much at the bad. I feel like we can be a pretty great football team moving forward.”