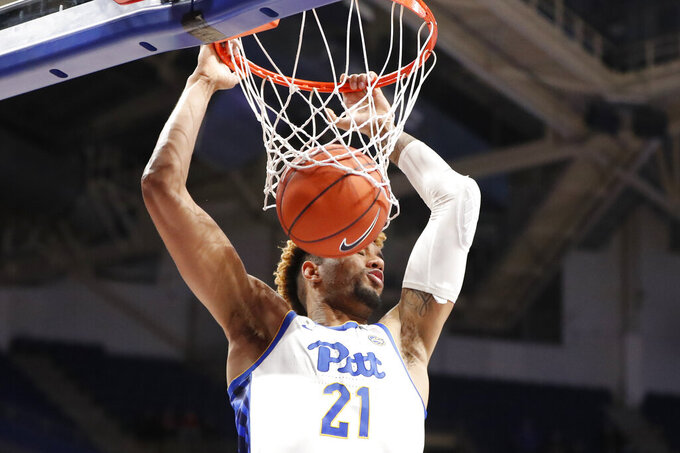 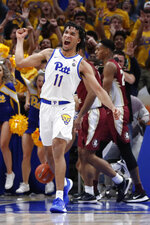 PITTSBURGH (AP) — Jeff Capel and Leonard Hamilton expected ugly. Good thing, because the Pittsburgh and Florida State coaches saw plenty of it in their season opener on Wednesday night.

Missed shots. Turnovers. Scrambles for loose balls that looked more like rugby scrums. Oh, and fouls. Lots and lots of fouls. Yet through the whistles and the weirdness, the Panthers found the resolve necessary to grind out a 63-61 victory that laid another brick in the foundation Capel is trying to set in his second year on the job.

"I thought we showed a lot of toughness, showed a lot of togetherness," Capel said after the Panthers rallied from nine down to beat the Seminoles for a second straight season. "Got an amazing contribution from our bench and I thought guys just fought. We figured out a way to win."

Reserves Ryan Murphy and Terrell Brown scored 13 points each for the Panthers (1-0, 1-0 ACC), who won despite shooting just 31 percent (16 of 51) from the field. Pitt survived by getting into the lane relentlessly against the bigger Seminoles (0-1, 0-1), an approach that helped them outscore Florida State 22-13 at the free throw line.

"We want to attack," Capel said. "They're a team usually with a lot of size but we want to challenge that. That's who we are and what we do."

Florida State is rebooting after winning a program-record 29 games a year ago. All that newness led to first-game jitters that translated into an over-aggressiveness that led to foul trouble that forced Hamilton to dive deep into his bench. Twelve players saw the floor for the Seminoles.

"We were reaching and grabbing," Hamilton said. "There were some very anxious fouls and once we got into that situation where we had to play a lot of different lineups, they took advantage of it."

Still, Florida State went up 40-31 on a layup by Osborne with 13:37 to play. The Panthers, however, responded behind a mixture of old and new faces. Freshman Justin Champagnie hit a 3-pointer to get Pitt started and the Panthers found their footing thanks in part to Brown. A starter a season ago, he began the night on the bench as part of a revamped lineup. He scored all of his 13 points in the second half, including a layup while getting fouled with two minutes to go and made the ensuing free throw to push Pitt's lead to 59-56.

"I thought Terrell was terrific," Capel said. "Thought it was one of the best games he's played since I've been here. He finished around the rim and I thought our guys did a good job of finding him."

The Seminoles had a chance to tie it at the end of regulation but Patrick Williams missed a jumper with two seconds to go. Anthony Polite grabbed the offensive rebound but couldn't get a shot off before the buzzer. Florida State shot 40 percent (21 of 53) from the floor but just 6 of 20 3-pointers.

"I think we're still in the developing stage and when you go on the road in the ACC regardless of who you're playing, you've got to execute and be at your best," Hamilton said. "If we get those same open looks in the future, hopefully they'll go down a little better. I think their defense had something to do with it."

Florida State: The Seminoles might be mixing in a sea of new faces but they remain big and athletic. The Seminoles blocked six shots and made things uncomfortable for the Panthers for long stretches before wearing down late

Pitt: Ten months after upsetting the Seminoles behind McGowens and Xavier Johnson — who combined for 48 points — the Panthers showed they might be more versatile this season. Murphy, a junior college transfer who originally began his college career at Charlotte, made 3 of 6 3-pointers and Champagnie overcame a shaky start to knock down a pair of big shots in the second half.