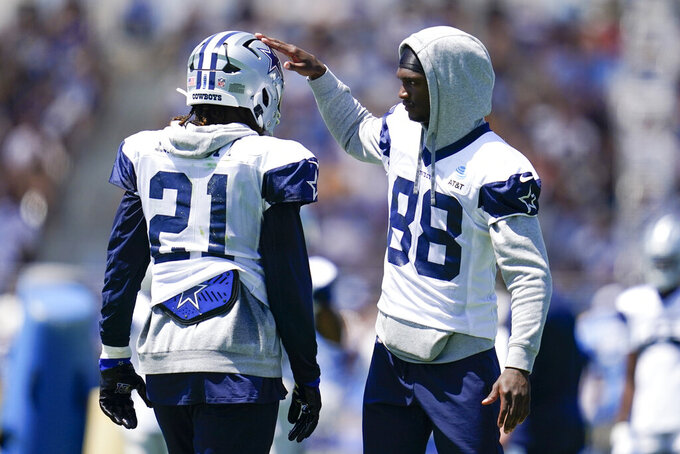 FRISCO, Texas (AP) — Dak Prescott is without one of his top receivers and a starting tackle from last season as the star quarterback tries again to lead the Dallas Cowboys to a playoff breakthrough they've been seeking for more than 25 years.

The questions on offense are bigger than those of the Micah Parsons-led defense, a rarity for a franchise with so much attention on Prescott and Tony Romo before him, not to mention two-time rushing champion Ezekiel Elliott.

Prescott prefers to focus on the return of new No. 1 receiver CeeDee Lamb and right tackle Terence Steele, rather than the offseason departures of Amari Cooper and La'el Collins.

Anything less than a deep postseason run could mean trouble for Mike McCarthy. The third-year coach is almost six seasons removed from his most recent playoff victory in the 2016 season with Green Bay.

The Super Bowl won by McCarthy's Packers at the home of the Cowboys was 12 seasons ago, and the shadow of Sean Payton will follow him with one of owner Jerry Jones' favorites out of football but expected to return to coaching in 2023 after leaving New Orleans.

“I know every single day when I get up, in my younger days as a head coach, my whole thought process was, ‘How am I going to win today?’” McCarthy said. “You understand the negatives, the narratives, that’s part of the job. That’s about as far as it goes with me.”

McCarthy's latest playoff moment wasn't his best, when the Cowboys ran out of time on a designed quarterback run that was supposed to give the NFC East champions one more play in a 23-17 wild-card loss to San Francisco at home.

Dallas hasn't even reached an NFC championship game since the last of the franchise's five Super Bowl titles to finish the 1995 season — the sixth longest active drought in the NFL.

Prescott is ready to run it back with Elliott, Lamb, tight end Dalton Schultz and an offensive line in transition. Five-time All-Pro right guard Zack Martin is the only anchor at the moment with eight-time Pro Bowl left tackle Tyron Smith probably out until December with a torn left hamstring and knee injury.

Receiver Michael Gallup should return early in the season after tearing an ACL last season, and backup running back Tony Pollard could line up anywhere in the strongest effort yet by offensive coordinator Kellen Moore to get the speedy back involved.

“Our offense, we’re not reinventing the wheel by any means,” said Schultz, who is playing on the franchise tag. “Collectively, we have made the saying of we need to find an identity and really harp on, ‘We do X, Y and Z really, really well. That’s what we rely on.’ I think that’s been a big focus for us in the offseason.”

Schultz lists two identities: the efficiency of Prescott throwing deep and the effectiveness of the run game. Elliott is entering a make-or-break season because a cost-cutting move to replace him becomes more realistic next offseason.

Prescott and Elliott emerged as rookie stars together in 2016, leading the Cowboys to the NFC's top seed before a divisional-round loss to Green Bay. Now they take a 1-3 playoff record into their seventh season.

“It is surprising because we had some good years, but I think that’s the next step for this team,” Elliott said. “We got the ability. We had the production. None of that means anything if you don’t go and handle the situations, more specifically, that last situation, that last two-minute versus San Fran.”

DeMarcus Lawrence headlines what could be a deep defensive line for a playmaking unit that led the NFL with 34 takeaways last season. There were plenty of signs in training camp that Dan Quinn's second Dallas defense can shine.

“I think this day and time with the rules loading up for the offense, if you can become more substantive on defense you are working the system more,” Jones said. “I thought we were positioned last year with the way our defense was coming and healthy as we were going into the playoffs, I thought we had a good shot at it. I just want to get back to that spot this year.”

KaVontae Turpin returned a kickoff and a punt for touchdowns in a preseason victory at the Los Angeles Chargers, all but assuring a roster spot for the dynamic speedster from TCU.

The 5-foot-7 Turpin's shot at the NFL was delayed after he pleaded guilty to a charge of assaulting his girlfriend in 2018. The incident ended his college career. Turpin spent the intervening years on the fringes of pro football, signing with the Cowboys after being named MVP of the reincarnated USFL this past spring.

Tyler Smith, the 24th overall pick out of Tulsa, could end up as Tyron Smith's replacement, or might play left guard after Connor Williams signed with Miami in free agency. Defensive end Sam Williams, the second-round pick out of Mississippi, has shown enough in the preseason to get plenty of playing time opposite Lawrence.