Pro days key for NFL hopefuls with no combine this year 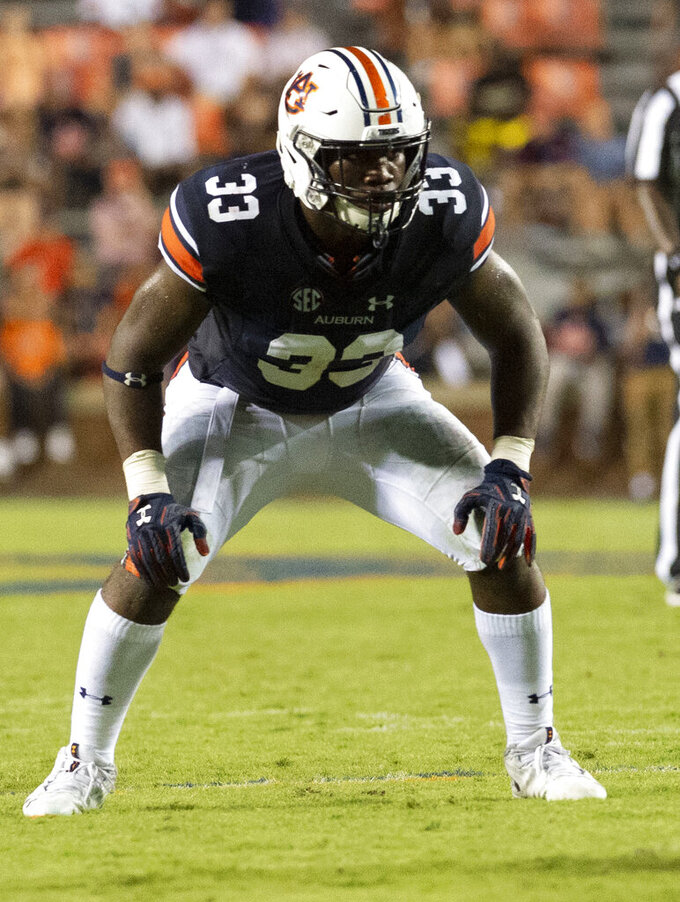 FILE - In this Sept. 8, 2018, file photo, Auburn linebacker K.J. Britt (33) lines up against Alabama State during the second half of an NCAA college football game in Auburn, Ala. The scouts were there in big numbers. But NFL prospects who were timed and tested, poked and prodded at the pro days didn’t have the usual contingent of underclassmen looking on and offering their support. (AP Photo/Vasha Hunt, File)

He'd cheer on his older teammates as they were getting sized up by NFL scouts in preparation for that year's draft — and he'd envision getting everyone's encouragement when it was his turn.

The pandemic rendered that long-awaited capstone to his college career a much different experience than he'd imagined.

Campus and county COVID-19 restrictions meant that no teammates could watch Johnson and Will Sherman, the only other Buffaloes prospect who participated in Colorado's scaled-down pro day last month.

“We didn’t have our teammates there saying, ‘You got this! Keep pushing!’” Johnson lamented.

Johnson and Sherman were left to cheer on each other as NFL personnel scrutinized their every move.

“In the past, you have a crowd there. But today it was just me and Mustafa and a bunch of scouts," Sherman said. "So, to have someone else over there cheering me on, it was definitely big. I appreciated that. I was doing the same for him.

“We helped each other out on this weird COVID pro day.”

At least they had each other.

Forty-five miles up Interstate 25, Colorado State wide receiver Warren Jackson was the only participant at the Rams' pro day, a fact he insisted didn't take away from the experience.

"I've been dreaming about this moment since I was a little kid running around the house with a helmet, hitting the couch," Jackson said after two dozen scouts watched his solo act.

“It was a really good turnout for one guy," Jackson said. "I'm grateful they all showed up and I got to put on a show for them.”

Pro days took on added significance this spring with the NFL scouting combine scrapped and team visits prohibited because of the coronavirus.

“It definitely would have been cool to go out to Indy, get that weeklong experience of what the combine is like, just watching that as a kid all the time,” Sherman said.

The combine allowed teams to get timely medical reports and allowed for uniform testing and timing of prospects, who could see how they stacked up against their peers in their draft class and even historically.

That wasn't the case this year.

Teams had to send scouts, coaches and general managers across the country for any of the 103 college pro days that replaced this year's combine in Indianapolis. Teams also weren't allowed private film sessions, workouts, or dinners with prospects. That left Zoom calls and all-star games, and ratcheted up the pressure on pro days.

“Not being able to actually meet or see them in person until you get here, yeah, it's nerve-racking,” Oklahoma State receiver Tylan Wallace said at his pro day.

“I would say there was a little bit more pressure on us because this was our only interview for the job,” said Auburn receiver Anthony Schwartz.

Pro days past often served as a mulligan for a poor showing at the combine.

“So, with pro day being the one shot for everything this year, I feel like it just added a lot of pressure for everybody,” said Oklahoma edge rusher Ronnie Perkins.

Dozens of prospects such as Colorado State's Jackson also had something extra to prove after opting out of the 2020 season because of COVID-19. Unless they played in the Senior Bowl, their pro days marked their only chance to knock off the rust from their long layoffs, show off their re-sculpted bodies from their pre-draft training — some of which was started last fall — and prove they are still passionate about football.

“The next time I have an opportunity to step between those lines,” said Oregon offensive tackle and opt out Penei Sewell, “I'm going to make the most of it and I'm coming with everything I have.”

What everyone seemed to miss from the combine were the head-to-head comparisons during position drills and the uniform 40-yard dash at Lucas Oil Stadium.

“I do not know how I ran today,” Georgia Tech defensive back Jaytlin Askew said. “Nobody told me anything.”

“I don’t have any numbers, I apologize,” said Northwestern linebacker Paddy Fisher. “I was trying to find some after we finished our position drills but all the scouts had left.”

Do NFL teams, though?

There was even some uncertainty in the weight room.

“I wish I had somebody counting for me,” Auburn linebacker K.J. Britt said after getting 24 reps on the 225-pound bench press.

Wisconsin O-lineman Cole Van Lanen didn't mind the combine cancellation — “I got an extra two weeks of training” — nor was he bothered by the Badgers' pro day restrictions.

“I would have loved to be here with my family and my agents, the people who support me, and experience this with them,” Van Lanen said.

"But you've got to make the most of it. It's just like a game. You don't realize the crowd that's there. You're there to perform. You block everything out and you perform, and that's kind of what this was, too.”