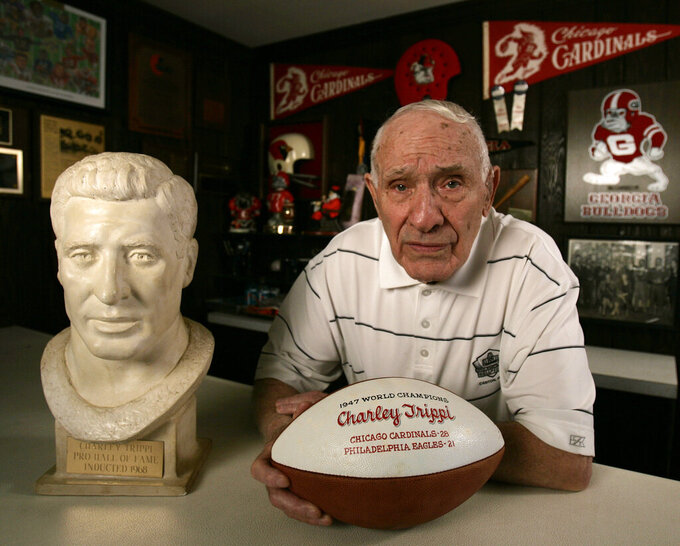 FILE - Pro Football Hall of Fame member Charley Trippi poses with memorabilia at his home in Athens, Ga., on Jan, 27, 2009. Trippi, a runner-up for the Heisman Trophy at Georgia who went on to lead the Cardinals to their most recent NFL championship in 1947, died Wednesday, Oct. 19, 2022. He was 100. (AP Photo/John Bazemore, File)

ATLANTA (AP) — Pro and College Football Hall of Famer Charley Trippi, a runner-up for the Heisman Trophy at Georgia who went on to lead the Cardinals to their most recent NFL championship in 1947, died Wednesday. He was 100.

The University of Georgia announced that Trippi died peacefully at his Athens home.

Trippi was one of football’s most versatile players, lining up at multiple positions on offense, defense and special teams. He is the only member of the Pro Football Hall of Fame to have 1,000 yards rushing, receiving and passing in his career.

The son of a Pennsylvania coal miner, Trippi had a simple explanation for his dazzling array of skills.

“In those days, the more things a player did, the more pay he could demand,” Trippi said, according to his bio at the Pro Football Hall of Fame. “I could run, kick, pass and catch, and that made me a valuable property.”

Trippi played his college football at Georgia in the 1940s, his career interrupted by a stint in the military during World War II.

Trippi led the Bulldogs to a Rose Bowl victory, finished second to Glenn Davis for the 1946 Heisman Trophy, and was a No. 1 overall draft pick by the Cardinals, who then called Chicago home.

He went on to star in the “Dream Backfield” for the Cardinals, leading the franchise to the 1947 NFL championship. The team, which moved to St. Louis in 1960 and then to its current home in Arizona in 1988, has yet to win another title.

“Charley Trippi was one of the greatest Bulldogs of all time!” Georgia athletic director Josh Brooks wrote on Twitter. “It was an honor to get to know him! God Bless the Trippi family.”

On Dec. 14, 2021, Trippi celebrated perhaps the crowning achievement of a remarkable life.

He turned 100 years old, becoming just the second member of the Pro Football Hall of Fame to reach the century mark. Clarence “Ace” Parker died on Nov. 6, 2013, at the age of 101.

Georgia coach Kirby Smart was among those who stopped by Trippi’s home to help celebrate with a cake topped by 100 candles.

Despite his feeble health, Trippi managed to blow them all out.

“If you know anything about his legend at Georgia, you know he was, perhaps, the greatest all-around football player on our campus,” Smart said that day.

Charles Louis Trippi was born in Pittston, Pennsylvania, just as America was embarking on a golden era of sports in the 1920s.

According to an often-repeated story, Trippi’s family could not afford to buy him football cleats but he punted so well in his regular shoes that his high school coach, Paul Shebby, stepped in to make the purchase. One day in punt formation, after the snapper sailed the ball over Trippi’s head, he ran back to pick it up and weaved his way to a touchdown that showed he was far more than a one-dimensional player.

Trippi received a scholarship to play for the Bulldogs through his connections to a Coke bottler -- who also happened to be a Georgia alum -- in nearby Wilkes-Barre, Pennsylvania.

As a sophomore in 1942, he starred on a Georgia team led by Heisman Trophy winner Frank Sinkwich. In a 75–0 rout of rival Florida, Trippi ran for two touchdowns, threw for another, and scored a fourth on an interception return. Georgia finished 11-1 and was picked as national champion in several polls, though the Bulldogs were No. 2 in The Associated Press rankings behind Ohio State.

Georgia capped the season with a 9–0 victory over UCLA in the Rose Bowl. Trippi carried 27 times for 115 yards, also handled passing and punting duties, and was retroactively named the game’s most valuable player when the award was created in 1953.

Trippi missed the entire 1944 season and part of 1945 serving in the military. He returned to Georgia to finish his college career in 1946.

Also a stellar baseball player, Trippi played one season with the Atlanta Crackers, a powerhouse minor league franchise at the time. He batted .334 in 106 games while drawing large crowds to Ponce de Leon Park. Even though several big league teams attempted to sign him, Trippi decided that football provided his best chance for success.

Baseball did play a role in Trippi’s pro football career. In 1946, he was at the center of a huge bidding war between the NFL Cardinals and the New York Yankees of the fledgling AII-America Football Conference.

The football Yankees were so sure he would agree to a joint contract to play both for them as well as the storied baseball team of the same name that they called a news conference to announce the deal.

But Trippi wound up signing a then-unprecedented four-year, $100,000 contract with the Cardinals to complete the “Dream Backfield” that also included Elmer Angsman, Paul Christman and Pat Harder.

In Trippi’s rookie season, Chicago won what remains its only undisputed NFL crown.

Cardinals owner Michael Bidwill, whose family has owned the franchise since 1933, said Trippi “will always enjoy a special place in the history of the National Football League, the Cardinals franchise and especially in the hearts of our family.”

“He was a key part of the Cardinals NFL championship team of 1947, my grandmother’s first as owner and on which my dad was a ballboy,” Bidwill said in a statement. “I had the pleasure of getting to know Charley in more recent years and hearing his stories from such an important time for the Cardinals and the NFL.”

The 1947 title game was played at Comiskey Park, where the Cardinals hosted the Philadelphia Eagles on a baseball-turned-football field coated with a thin sheet of ice on a bitterly cold day.

Unable to get much traction is his cleats, Trippi switched to a pair of sneakers. He led Chicago to a 28-21 victory, scoring a pair of touchdowns on a 44-yard run and a 75-yard punt return.

“The only time I played an NFL game in tennis shoes was in Chicago for our championship team,” Trippi said in a 2014 interview. “We got better footing in tennis shoes. You couldn’t stand up in cleats.”

The weather again played a huge role the following year when the Cardinals returned to the title game for a rematch against the Eagles at Shibe Park. A blizzard struck Philadelphia, dumping so much snow on the field the players couldn't even see the yard lines.

The Cardinals, who had averaged nearly 33 points a game during an 11-1 regular season, were shut out 7-0 by the Eagles in a thoroughly dismal affair.

“It was more of a pushing game,” Trippi recalled. “The ballplayers just couldn’t react like they wanted. I think the fans got cheated out of seeing a real championship game.”

When the Cardinals -- now in Arizona -- made their first Super Bowl appearance in 2009, Trippi was thrilled by their success and pulling hard for another championship.

“Well, I never lost hope,” he quipped before the big game, “but I was a little apprehensive there for a long time.”

Alas, the Pittsburgh Steelers knocked off the Cardinals 27-23, so that Trippi-led championship remains the franchise’s most recent.

He played nine seasons with the Cardinals, lining up pretty much anywhere he was needed.

Trippi started out as a halfback, switched to quarterback for two seasons and closed out his career playing mostly defensive back. He also was the punter, in addition to excelling as a kickoff and punt returner.

In 1968, Trippi was inducted into the Pro Football Hall of Fame.

He was responsible for 53 regular-season touchdowns over his career: 23 rushing, 16 passing, 11 receiving, two on punt returns, and one with an interception return. For good measure, Trippi averaged 40.3 yards as a punter, had four career interceptions, and recovered 13 fumbles.

Coming from a brutal sport where far too many have died young, Trippi beat the odds by living into a second century. He was a vibrant figure for much of his life, raking leaves and cutting grass well into his 90s at his home not far from Georgia’s Sanford Stadium.

Trippi is survived by his wife, Peggy, and two children, daughter Brenda and son Charles, according to longtime friend Loran Smith. He was preceded in death by his first wife and oldest daughter.

Trippi was inducted into the College Football Hall of Fame in 1959.

Nine years later, during a brief speech marking his induction into Canton, he thanked those who helped him along the way, including his high school, college and NFL coaches.